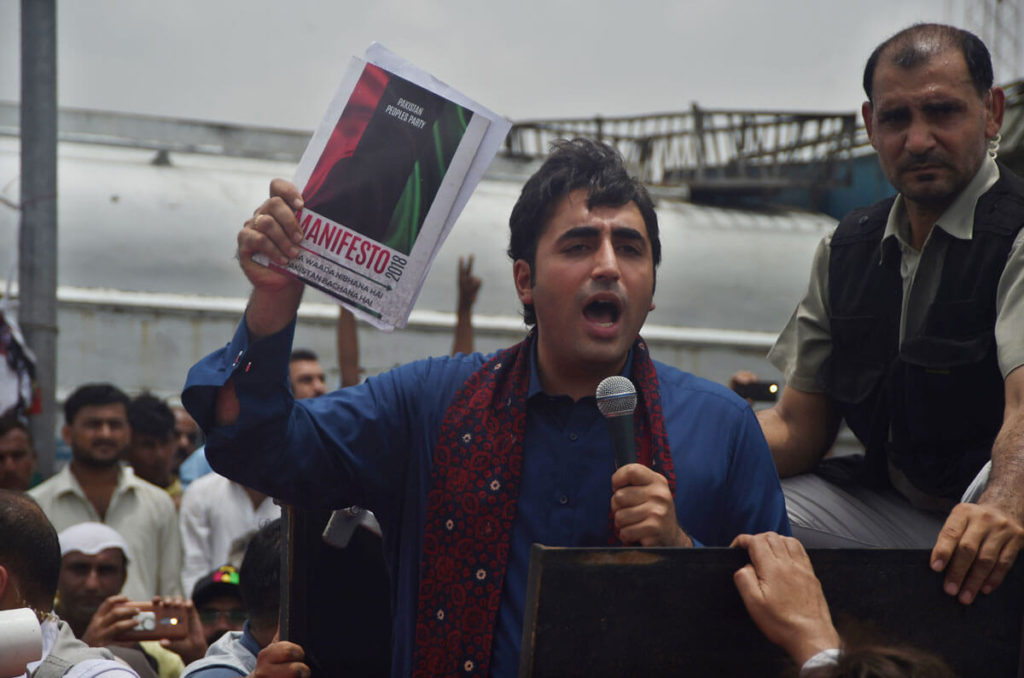 Who will be the overall frontrunner in the 2018 general elections from Sindh? The answer to this question is obvious — the Pakistan People’s Party (PPP). Despite all the allegations of corruption and grievances against a decade of poor governance and misrule, the PPP seems in control of the electoral battlefield of Sindh – its traditional stronghold.

It is not just the Bhutto name that still casts its spell; the dominance of the PPP in the second-tier cities and rural parts of Sindh is also due to the fact that there appears to be no effective alternate leadership to pose a serious challenge to the party.

The entry of Bilawal Bhutto Zardari, PPP’s young chairman, in the electoral field for the first time is also expected to give a boost to the PPP in most parts of Sindh.

Another factor which the PPP hopes will help it not only maintain its grip but extend its gains as well in Election 2018, compared to 2013, is the inclusion of electable candidates — read powerful landlords — in the party. “It may not go down well with the PPP’s ideological old-guards, but Asif Ali Zardari sahib (former president and co-chairman of the PPP) himself took the lead to bring powerful feudal lords within the party fold to ensure seats for the party in the coming elections,” said a PPP insider requesting anonymity.

The third factor, which is likely to help the PPP’s bid for a third consecutive term to form the provincial government in Sindh and send members to the National Assembly, is its influence over the civil administration. Although there is a caretaker set-up, the neutrality of many administrative officers remains doubtful because they have been cultivated and supported during the past two terms of the PPP. All this gives a huge edge to the PPP.

However, at least on paper, there are some big names and forces, including the Grand Democratic Alliance (GDA), trying to challenge the PPP in its bastion of power, but the prospect of their candidates giving a tough fight in the elections, barring a few districts, appears bleak.

“There is a strong negative sentiment against the PPP because of its poor performance, but the GDA has failed to capitalise on this discontent,” says Dr. Jabbar Khattak, chief editor and publisher of the leading Sindh-language daily, Awami Awaz. “The anger against the PPP won’t transform into a wave because of the lack of leadership.”

The GDA comprises traditional anti-PPP forces including Pir Pagara’s Pakistan Muslim League-Functional; Ayaz Latif Palijo’s Qaumi Awami Tehreek; the PPP’s Workers’ faction led by Naheed Khan and her spouse, Dr. Safdar Abbasi; Ghulam Murtaza Jatoi’s National Peoples’ Party and Arbab Ghulam Rahim’s Peoples’ Muslim League. Along with these groups, there are individuals like the powerful landlord Ali Gohar Mahar in Ghotki and PPP dissidents, Dr. Zulfikar and Fehmida Mirza in Badin and several others in various constituencies, who are supporting the GDA. Some Sindhi nationalists, including Jalal Mohammed Shah, are also in alliance with the GDA in select constituencies, along with the Pakistan Tehreek-e-Insaaf.

Ayaz Latif Palijo, the secretary general of the GDA, claimed that the anti-PPP alliance would form the provincial government in Sindh. “Out of 25 districts in Sindh, the GDA has a clear edge in at least 18,” he said while talking to Newsline. “In Umerkot, Thar, Mirpurkhas, Badin, Sanghar, Naushero Feroze, Shikarpur, Ghotki, Dadu and Jacobabad, we have a clear edge, while in Nawabshah, Sukkur, Larkana, Qambar-Shahdadkot, Tando Allahyar and Hala we expect a neck-to-neck fight,” he said.

However, GDA detractors say that these great expectations do not reflect the ground reality.

According to Dr. Jabbar Khattak, the GDA secretary-general, Ayaz Palijo, himself does not have a solid constituency. “The GDA comprises the same forces which failed to make any impact in the past… the PTI factor has a nominal presence in Sindh. Only Liaquat Jatoi and Shah Mehmood Qureshi are the two serious PTI candidates in rural Sindh,” he said. “The parties and individuals comprising GDA have a few pockets and can act as a pressure group but their presence is confined to holding small demonstrations and issuing press statements.”

In the 2013 general elections, the PPP bagged 32 National Assembly seats out of 60, while the parties comprising GDA and its allies got just eight, including PTI’s lone seat from Karachi. MQM won 18 seats and one seat was won by the PML-N. For the provincial assembly elections, the PPP got 94 seats in a house of 168, while the parties within the GDA and its allies secured a total of 15 seats including the reserved seats for women and the religious minorities. The MQM and the PML-N won 50 and seven seats respectively.

Khattak maintains that despite the PPP’s abysmal performance, its opposition stands on a much weaker wicket. “For instance, the stature of the current Pir Pagara is not that of his father. There are differences even within the Pagara family. Unlike his father, who was good at bringing notables together, the current Pir of Pagara lacks this capacity also… And let’s not forget that even the senior Pir Pagara was defeated in the 1988 elections by PPP’s Pervez Ali Shah,” he said. “The GDA is an alliance of convenience, which has many aspirants for the chief ministership of the province. Moreover, the PPP has a far better organisational structure compared to its rivals in rural Sindh and will be able to bring in voters on election day.”

But journalist and analyst, Manzoor Sheikh, who is affiliated with Mehran TV, maintains that the anti-PPP forces in Sindh are expected to perform better than in the last election. “GDA has emerged as an important faction and anti-PPP forces are in a position to dominate at least seven to eight districts and give a tough fight in several others. There have been new political alignments and some powerful families which once supported the PPP, now stand on the other side. I see an anti-PPP tide in Badin, Tando Jam, Tando Allahyar, Naushero Feroze and Khairpur. I see tough competition in Sukkur as well where PPP’s Khursheed Shah is running for a National Assembly seat, while his son and nephew are campaigning for two provincial assembly seats which has created resentment among the people.”  However, said Sheikh, “The Bilawal factor has been overplayed as people know that he is not in charge of the party.”

In a surprising development, a number of PPP candidates, including Nisar Khuhro, Naveed Qamar and Murad Ali Shah, were either manhandled or aggressively questioned by their constituents when they visited their constituencies. Even Bilawal was not spared when he visited Lyari; his convoy was stoned. A sign of the times perhaps, underlining a growing awareness among the voters who expect their representatives to perform.

PPP critics predict some nasty surprises for the party in the 2018 elections, but given the track record and the absence of an effective leadership within the opposition, it is likely to win Sindh for the third time in a row, albeit with a slashed number of seats.