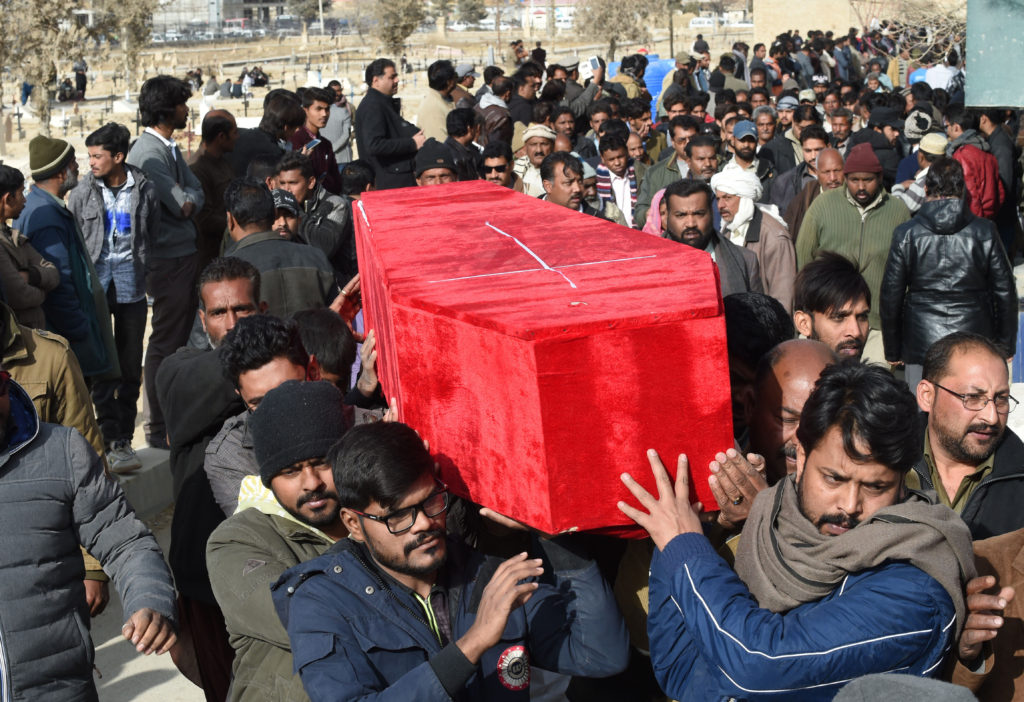 Pakistani Christians carry the coffin of a victim of a suicide bombing the day after the attack on a Methodist Church in Quetta.

Christmas was a solemn occasion in Quetta this year, as a group of Christian pastors from various Christian denominations were busy with relief and rehabilitation work. Tragedy had struck just a week before.

On Sunday morning, on December 17, when a congregation of worshippers was taking communion at Bethel Memorial Methodist Church and children were presenting a play for Christmas, militants armed with rifles and wearing suicide vests attacked the church. Sounds of bullets were heard being fired, followed by a subsequent blast.

The church security guard, George Masih, had tried to stop the terrorists from entering the church premises and was killed. Another guard locked the main door of the church to stop a militant from entering, so the militant blew himself up at the door. Many people were hurt by the blast, but several who rushed out were shot by bullets fired by the militants outside. The resistance from the church security guards and the policemen in the vicinity averted a much bigger disaster, but the attack still left 11 people dead and more than 60 injured. After this tragic incident, there was little festivity at Christmas, as the community expressed solidarity with the bereaved families. Also, since Christmas was on Monday, only seven of the 41 churches had service on Christmas day.

Beenish Sikandar, a lawyer and member of the Awami National Party (ANP) minority wing, says, “The attack took place from the door of the church where young children, who were part of the choir were sitting. That is why there were so many young boys and girls among the dead.”

Sikander has been active with relief work since the day of the incident, along with ANP party members, who distributed food items and rations among the families of the deceased and the injured. She laments that no one from the provincial government approached them on the first day of the attack; they came only after they were criticised on the social media.

Quetta has witnessed a surge in terrorist attacks in recent months. There is a history of such attacks on the Haraza community, but attacks on Christians are the new face of terrorism. Before this attack, in the first week of December, a seven-year-old boy was killed in a hand grenade attack at the gate of a Christian colony in Chaman, Balochistan. The recent attacks have increased the stress and apprehension levels of the Christian community, and of the provincial government and the law-enforcement officials.

Quetta is home to several ethnicities; native Pashtuns, Baloch, and Hazaras; and migrant Punjabi, Hindko and Urdu speakers. The majority of the Christians speak Punjabi and they have been an integral part of the city’s landscape since colonial times. The numbers of people from their community increased as economic migrants from different parts of Punjab kept coming to the city, either to be part of the education and health sector run by Christians, or to take up petty jobs. With increasing population, the number of churches have also increased. Currently, Quetta has 41 churches, which are associated with three denominations – the Catholic, the Protestant, and the Pentecostal – all situated in different Christian localities.

Shakeel Daniel, a recent (2007-2008) alumnus of the Assemblies of God Bible School, Railway Housing Society Quetta, now serves as pastor at Open Book Ministries Church in a locality near Sardar Bahadur Khan Women University, Brewery Road, Quetta. The locality is home to hundreds of Christian families with three churches, but none of them have felt threatened by the Pashtun and Baloch residents.

“My brother and I have been living here among the Baloch and Pashtuns since our birth, as our father Chaudhry Daniel started living here decades ago. He was a social worker and equally respected by his own community, as well as by the others for his services. He was elected councillor from the locality in the early 90s,” said Daniel.

Daniel presented a reassuring account of the response from the people of Quetta, fellow Christians and Muslims, after the December 17 tragedy. “After the blast, when the deceased and injured were brought to the hospital, people flocked towards the hospital, both our fellow Christians and Muslim brothers, and expressed solidarity with the families, and donated blood; within a few hours, 400 blood bags were available at the hospital for the injured, it was more than the required numbers.

“Also, people from my neighbourhood visited us for condolence. The Jamiat Ulema-e-Islam Fazlur Rehman group, (JUI-F) has elected one of the most vocal voices of our community, Baji Asia Nasir, to the National Assembly. They have also built roads and done development work in our localities,” he added.

Christians in Balochistan are politically represented, on seats reserved for minorities, with two members in the National Assembly — Asia Nasir from the JUI-F and Khalil George from the Pakistan Muslim League-Nawaz (PML-N) — and two Christian members in the provincial assembly, Anita Irfan from the ruling PML-N and William Jan Barkat from the Pashtunkhwa Milli Awami Party (PkMAP).

Nayyer Shaukat Javed, a 38-year-old Christian activist, has previously worked with Partners Aid International as a teacher. Sharing his experiences of working in Quetta he said, “Quetta is different in many ways. Here most of the people do not discriminate on the basis of religion. We sit together and share our food. People identify me by my ethnicity, but I have barely encountered anyone who has asked about my faith. On one rare occasion when my faith came under discussion, the father of one guy who was involved in smuggling laughed and said, “Nayyar is better than us, a teacher, not a smuggler.”

Javed continued, “Also belonging to the Pentecostal denomination, I do not drink, or use any kind of drugs. In fact, some of my friends say, ‘You have grown a beard, you don’t drink, why don’t you convert to Islam — you already have 99 per cent of the attributes of a Muslim.’”

Referring to Nayyer’s comments, Daniel, said, “He’s an example of the transformation our community has undergone in the last two decades. We have stressed to the community the importance of acquiring education, as most of our people have been associated with petty jobs and poor living conditions. Thank God that the situation has improved a lot.”

Dr. Shah Muhammad Marri, Baloch historian and intellectual, speaks very highly of the contributions of the Christian community in Quetta. Referring to their services in the education and health sector, and their literary work on Balochi folk poetry and grammar, he says, “We are unable to reward them, we can’t put up statues to honour them, but we mustn’t let people forget them. They (missionaries) wrote books about the history of this area. There is a fantastic book, Popular Poetry of the Balochis by Mansel Longworth Dames. If this book had not been written, our poetry would be lost.” And, he adds,

“Two girls schools, St Joseph and Sacred Heart –were the only functioning girls schools in this town. And there were no girls’ schools of this calibre elsewhere in Balochistan. So for generations (Muslim) families have brought their daughters to Quetta to educate them in these schools. In fact, whoever was serious about the education of their girls, would live near these schools in Quetta.”

Previously, the greatest calamity that threatened Quetta was earthquakes. But it now faces another danger – attacks on minority groups. The Christian community in Quetta is a reminder of its diverse past, and destroying them could lead to erasing of the collective memories of the city.