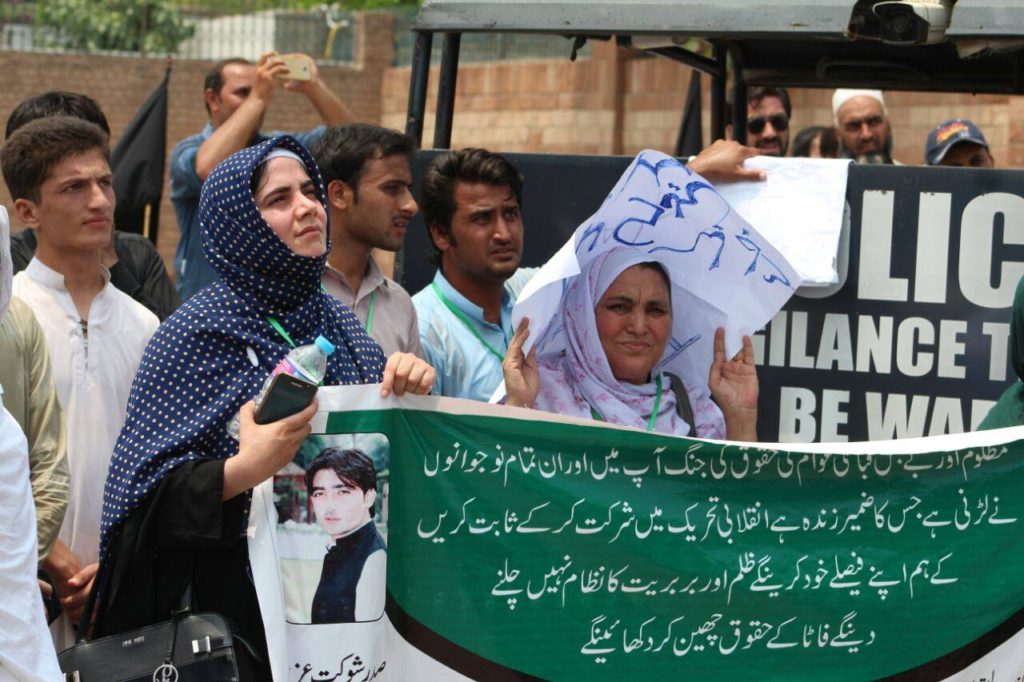 Demanding equal rights: Women of FATA protest in front of the Governor’s House in Peshawar.

“The women of the Federally Administered Tribal Areas (FATA) are happy living a life of poverty and ignorance because they don’t know any better,” says Kainat Orakzai, a women’s rights activist from Orakzai agency. “From the cradle to the grave, it is the only life they know.” Subjugated by rigid, tribal traditions, FATA’s women see mainstreaming as an opportunity to break free of their chains.

From time to time, tribal elders, scholars and educated young leaders have shed light on this 27,200-square-kilometre region’s dark corners: its women and the denial of their rights. In a society where women have no right of expression, writing their story has been difficult, as it has meant re-living their pain and repression.

“There is no organised forum where FATA’s women can unite and make their voices heard,” continues Kainat. “They have no say in their destiny. No one has ever bothered to ask them.” Kainat says that it is the fundamental right of the women of FATA to enjoy equal protection under the law and to be treated as an integral part of the federation. She sees the merger as the only hope for any possible emancipation — that somehow, social liberty will be a potential knock-on effect of the development that comes with mainstreaming. 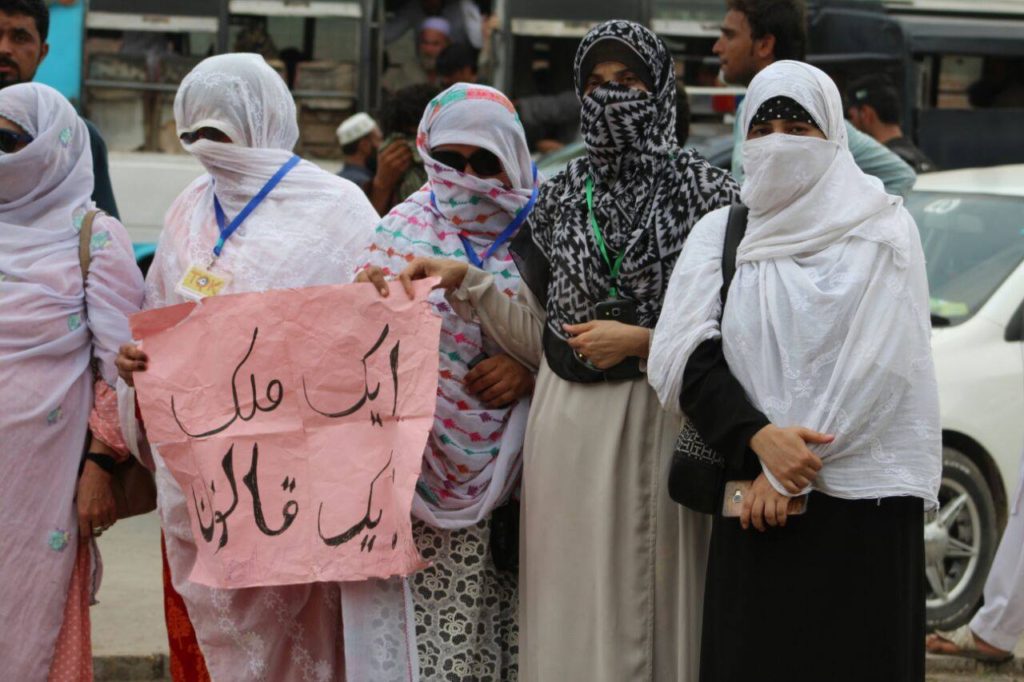 ‘One country, one law’: Women of FATA protest against the FCR in Peshawar.

When talking to the women, one can sense the betrayal they feel in having been ignored and sidelined in the entire debate on the merger of FATA with Khyber-Pakhtunkhwa (KP).

The 2017 census estimates that there are currently 2,445,357 women living in Fata, and the female literacy rate, according to the FATA Development Indicators Household Survey (FDIHS) 2013-14, stands at 7.8 per cent, owing to cultural and social constraints, poverty, local leaders’ lack of interest in the education of their communities, low budgetary allocations for the sector — and, above all, the menace of terrorism.

Samreen Khan Wazir of South Waziristan, once a hotbed of militants, reiterates that the cultural, traditional and social practices have kept women vulnerable. “Tribal traditions have not only restricted and excluded them from decision-making at the domestic level, but also limited their access to education,” she laments. According to Wazir, the army’s operations against militants had resulted in the destruction of infrastructure and internal displacement of millions of people.

“I am unhappy that the governments of all the provinces are investing in ‘gimmicky projects’ rather than in the welfare of the most important segment of society — women,” says Wazir. “Education is the primary ingredient for human resource development, and literacy among females is a must in order to successfully compete in the modern world.” She argues that nearly half the population of FATA comprises of women; consequently, the region cannot achieve its development goals until womenfolk are given their due rights.

Wazir sees the mainstreaming of FATA as the only hope whereby the requisite legislation, for the prevention of gender-based violence, early age marriages and domestic violence in the tribal areas, could be tabled. She hopes that if and when the FATA reforms do take place, women of the region will have access to the basic laws to protect themselves from violence. Most girls between the ages 14 to 18 get married in FATA. Wazir personally knows a 22-year-old girl who is already a mother of six. “Women in developed, progressive societies would be disturbed to hear of such practices,” she says. 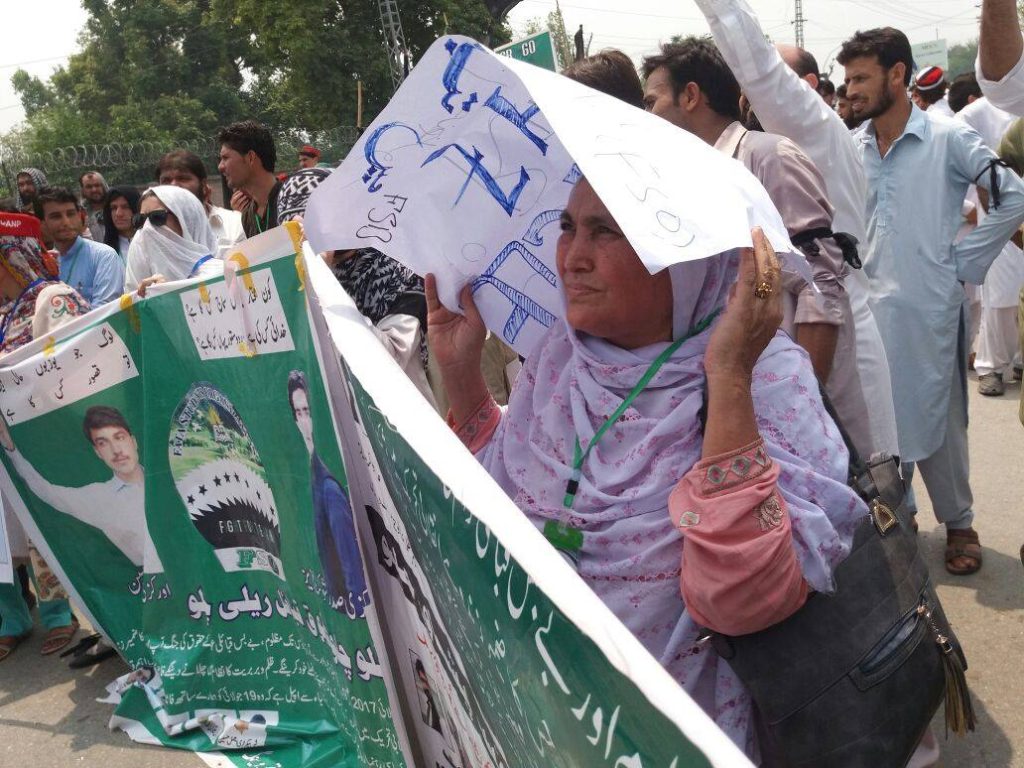 Governor’s House, Peshawar: FATA’s women play their part in the struggle for mainstreaming.

Wazir sees education as the the sole means by which the much-needed uplift of marginalised tribal women can be brought about. “Education can contribute significantly in the mainstreaming, by utilising women’s skills and knowledge. It would help put this backward region on the path to development,” she says.

According to Arshad Khan Afridi, Chairman of the FATA Youth Jirga, the women of FATA would be “extremely grateful,” for the merger of FATA with KP, as “a majority of them see it as a fate-changer for them.”

In November 2015, the then prime minister, Nawaz Sharif, formed a committee to determine the wishes of the people of FATA, with regard to the region’s future status. Chaired by Sartaj Aziz, then foreign affairs advisor to Sharif, the committee met with a number of maliks and tribal elders, to solicit their views, while the Ministry of States and Frontier Regions also received feedback from thousands of tribesmen. Unfortunately, the women of FATA were left out of the process.

Before imposing any decision regarding the region, it is imperative that the government take the women of FATA on board, as they could play an important role in ensuring a smooth and effective merger of the tribal areas into Pakistan.