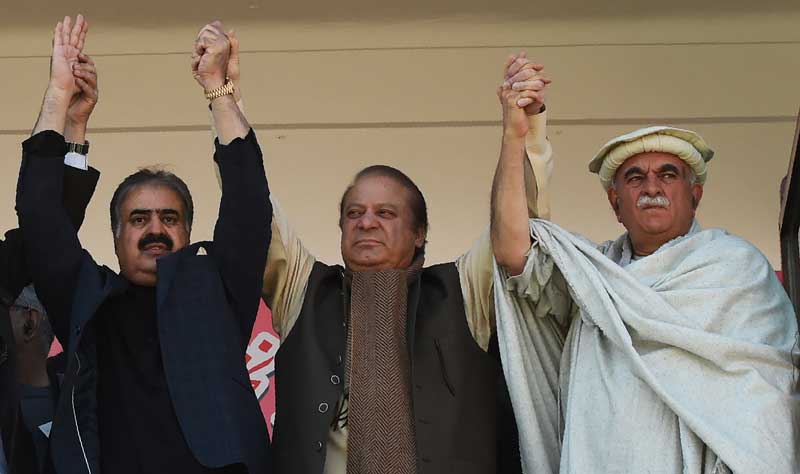 The town of Chaman, in Qilla Abdullah District, at a distance of 190 kilometres from the provincial capital Quetta, has always served as an important strategic location. It figures prominently in the centuries-long history of trade, travel and military campaigns against the bordering city of Kandahar in Afghanistan.

Today, Chaman, the second largest Pashtun city in Balochistan, after Quetta, is a battlefield for contenders of Pashtun votes. Since the leadership of both the Pashtun nationalist parties, the Awami National Party (ANP) and the Pakhtunkhwa Milli Awami Party (PkMAP), hail from Qilla Abdullah, it is the second-most significant electoral front for them. Historically a stronghold of the PkMAP, Chaman comprises one National Assembly constituency (NA-262) and three provincial assembly constituencies ( PB-11, PB-12, and PB-13).

The PkMAP came to power after winning 10 seats in the 2013 general election, which, along with three reserved seats for women and one for minorities, gave it a total of 14 seats in the provincial assembly. The party became part of the provincial government for the first time in its history, after forming a coalition with the centre-left National Party of Pakistan (NPP), and Pakistan Muslim League-Nawaz (PML-N).

For the office of chief minister, the coalition partners signed a power-sharing agreement at a meeting in Murree attended by the central and provincial leadership of the PML-N and heads of the NPP, and PkMAP. It was agreed that Dr. Malik Baloch of the NPP would occupy the office of chief minister of Balochistan for two-and-a half years and Nawab Sanaullah Zehri of the PML-N would serve as chief minister for the remainder of the term. The PkMAP did not participate in the vote of no-confidence held against Chief Minister Zehri in the Balochistan Assembly, on January 2, 2018, and reiterated its support of the power-sharing agreement.

As per the power-sharing arrangement, the PkMAP got the office of the governor and Muhammad Khan Achakzai, brother of PkMAP Chairman Mehmood Khan Achakzai, became the governor. The PkMAP also acquired the key ministries of Planning and Development (P&D) and Education as well as the Water and Sanitation Agency (WASA). It was also allocated two advisors to the chief minister, one for Information, Law and Information Technology, and the other for Forests and Wildlife.

“The Pashtun districts in Balochistan witnessed close contests between contenders such as the conservative religio-political party, Jamiat Ulema-e-Islam-Fazlur Rehman (JUI-F), and the Pashtun nationalist parties, PkMAP and the ANP,” says Hamayoun Kaasai, a journalist and social activist. “Independent candidates either rely on tribal leanings, or join mainstream political parties that make up the government.”

While the JUI-F is a beneficiary of the split between the two forces, the JUI-F itself has had a breakaway, the JUI-Nazriati faction, resulting in the defeat of many JUI-F stalwarts in the 2008 and 2013 elections.

Gulistan, another subdivision of Qilla Abdullah, is the home of Mehmood Khan Achakzai, who has contested elections for the National Assembly from here since the ’90s.

In the 2013 general elections, Achakzai contested from NA-259 (Quetta) and NA-262 (Qilla Abdullah), winning both. Later, he stepped down from the latter so that fellow party member, Abdul Qahar Wadan, could contest in the August 2013 by-election. Wadan too emerged victorious.

Hamid Khan Achakzai, the elected member of the provincial assembly from PB-11 (Chaman), understands the challenge posed by political rivals — the JUI-F and the ANP — and has managed to initiate development work in his own constituency and other districts, to keep the party’s support intact for the upcoming elections.

“The Pakhtunkhwa Milli Awami Party (PkMAP) has, since coming into power in 2013, improved the infrastructure vastly,” says Hamayoun Kaasai. “Highways connecting Pashtun districts have been built, and law and order has improved significantly.”

The road from Quetta to Chaman, which serves as a main artery for trade and travel, passes through mountainous terrain and is particularly narrow at the Kozhak Pass, resulting in the slow movement of traffic there.

“Accidents on this road were so common that they were a routine affair,” says a resident of Chaman. “No one would even bother to stop at the scene of the accident, or offer help to the victims. The road was a haven for bandit gangs, who would target travellers.”

In recent years, the widening of the road at Kozhak Pass has improved the flow of traffic and reduced the number of accidents. The law and order situation has also improved, after the gangs of marauders were eliminated in joint operations conducted by the police, the Balochistan Levies and the Frontier Corps (FC).

Quetta resident Farid Khan Kasi, a student at the Institute of Development Studies, University of Sussex, UK, suggests, “The performance of successive governments, the coalition of Baloch and Pashtun nationalists, and the government led by mainstream political parties — the PPP and PML-N — should be judged on the basis of three key issues in Balochistan: the severe water crisis, the law and order situation, and public utilities, such as education, health, and infrastructure.”

Kasi contends that the coalition government may have improved the law and order, but it is the FC that takes the credit for this. “Infrastructure has been developed, but the indicators in education and health still remain very low,” he continues, “and the water crisis has only worsened as plans to build reservoirs and dams for rain water storage, are marred by political differences between the coalition partners.”

Kasi raises the question of why the government did not work on the Burj Aziz Khan dam, which was crucial in resolving Quetta’s water woes. “Perhaps Baloch and Pashtun nationalists have not gauged its political leverage, or implications for the local populace.”

Rafiullah Kakar, who hails from Qilla Abdullah, and is an alumnus of the Blavatnik School of Government, at the University of Oxford, laments the provincial government’s inability to capitalise on the 18th Amendment, which is yet to be implemented in the province. “Despite the limitations of civilian governments, it could have managed to improve things in the post-18th Amendment scenario,” says Kakar. “The provincial government cannot complain about financial constraints.”

The coalition government PkMAP has been part of, however, could not live up to expectations. An academic from the International Relations Department at the University of Balochistan, explained, “We understand the limitations of the civilian government when it comes to the issue of dealing with warring Baloch groups, human rights violations, and relationships with neighbours; but what is preventing them from improving service delivery in different departments of government?” He cites, as an example, a recent case of a student registering a name change at the Matric Board office, which took him several months, a great deal of effort, and repeated trips to his home town in Awaran. “It boils down to incompetence and a lack of interest,” he concludes.

The PkMAP has a history of taking unpopular positions at the national level, whether it is foreign policy, the Afghan policy, relations with neighbouring countries, or the integration of FATA at stake. Kaasai believes that because of its stance, it has failed to get recognition for its performance in the mainstream media. He says the problem is further aggravated by “the internal rift within the party, as well as individuals and internal institutions. The party fails to capitalise on its performance. But young cadres have resorted to alternative platforms — online portals and social networking — to project the party’s achievements. We hope it will bear results.”