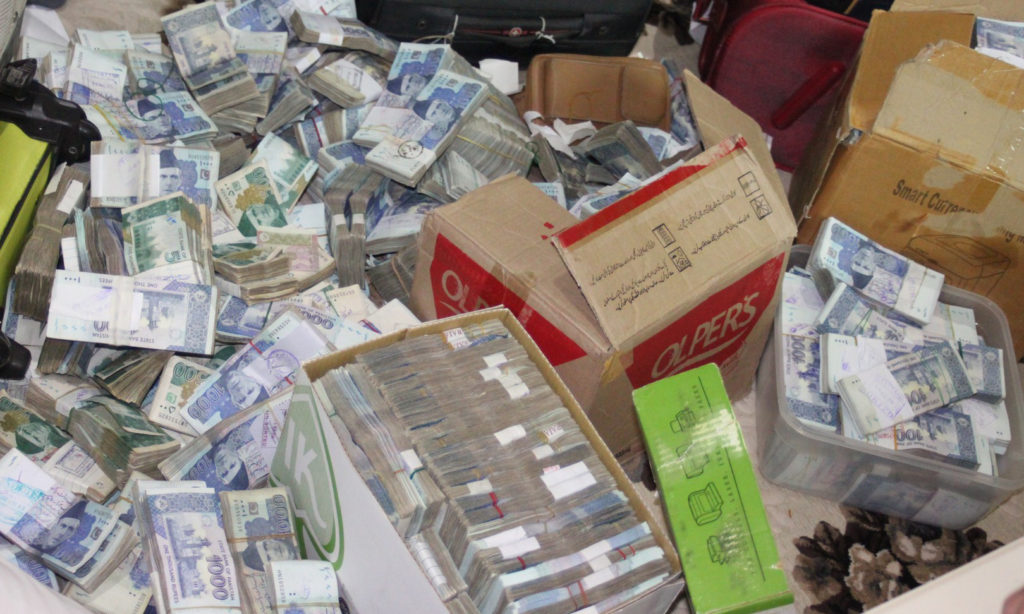 After the State Bank of Pakistan (SBP) withdrew its support of the Pakistani rupee’s valuation against the dollar last month, the rupee took a freefall. Until then, considered to be following the managed float system for the currency’s valuation, the SBP had been the primary player in the market that maintained its control of the currency.

The valuation of the rupee has remained relatively stable since 2015, as it successfully traded between the range of 104-105 per dollar, even though it continued to devalue by five per cent per annum, in the past decade.

A brief spell of devaluation was witnessed during July 2017, but with the help of the central bank’s intervention, the rupee’s value against the dollar was managed. However, considering the latest round of devaluation that has hit the local currency, we have seen the rupee decline by as much as 2.6 per cent in a single day.

According to analysts, the devaluation of the local currency has been long overdue, especially considering its stability over the past two years. This is especially true after looking at the external account position, which has reached over $12 billion in FY17 — an increase of over 350 per cent from FY16.

Exports have grown positively in the first quarter of the ongoing fiscal year (July – September 2017), and the FDI is now at a nine-year high. Meanwhile, foreign remittances have improved in the quarter as well.

Even so, it is the growth acceleration in imports that has pushed the current account into the red zone, in turn depleting the SBP’s forex reserves.

The central bank maintains that allowing the market to determine the exchange rate for the local currency, could be one way to contain the external account imbalance.

But the question remains: how has the rupee really been able to sustain its value over the past two years?

“The authorities have been very reluctant to allow it to sell off,” says Charlie Robertson, the global chief economist at Renaissance Capital. “It is because a stale currency is seen as an electoral winner. The rupee might be overvalued by as much as 25 per cent.”

Robertson maintains that politics impact the forex policy of any country, and so, the run of the rupee, he says, “especially if we consider the fact that the elections are expected to take place in 2018.”

Although officials from the Pakistani side claim that the devaluation of the rupee has “no relation at all with the IMF,” other analysts like Ruchir Desai from the Asia Frontier Capital Limited in Hong Kong believe that the government of the country is under a lot of pressure to loosen its grip on the currency.

“The central bank was allowing the market to determine the rate, but it is reversing the extreme volatility, if any, during intraday trading,” says Muzzammil Aslam, the CEO of EFG Hermes. “But there are pressures that the devaluation will [impact] prices of petrol, food items and even some services.”

The All Pakistan CNG Association (APCNGA) has also expressed its reservations over the latest devaluation of the local currency.

“There will be a hike in oil and gas prices following the recent devaluation and taking into account the fact that international energy prices are gradually gaining momentum,” he says, estimating that the prices of oil and gas could increase by as much as seven per cent due to the above-mentioned factors.

“The export sector as a whole needs to improve its competitiveness to boost its performance, instead of relying on government assistance,” he adds.

According to the SBP, the devaluation of the local currency will prove to be fruitful for economic growth and the country’s balance of payments position. Other experts have presented their opinions on how the devaluation will positively impact the equity sector of the country, since nearly 25 per cent of market capitalisation gains advantage from a weakening rupee.

The country’s sugar industry is also set to benefit from the decline in the rupee, as export stocks will be cheaper, and hence more marketable in the international market. Banks are also set to gain from a weakening local currency.

Of course, the rupee freefall has its upsides and downsides. With the depleting foreign exchange reserves now becoming an unavoidable issue, and considering that imports into the country might remain high due to CPEC plans, it seems as though the State Bank of Pakistan has prioritised the issue.

Also considering the fact that the equity markets have remained depressed for most part of the year due to the country’s political turmoil, the devaluation is also a way of reviving dampened investor confidence in the country.