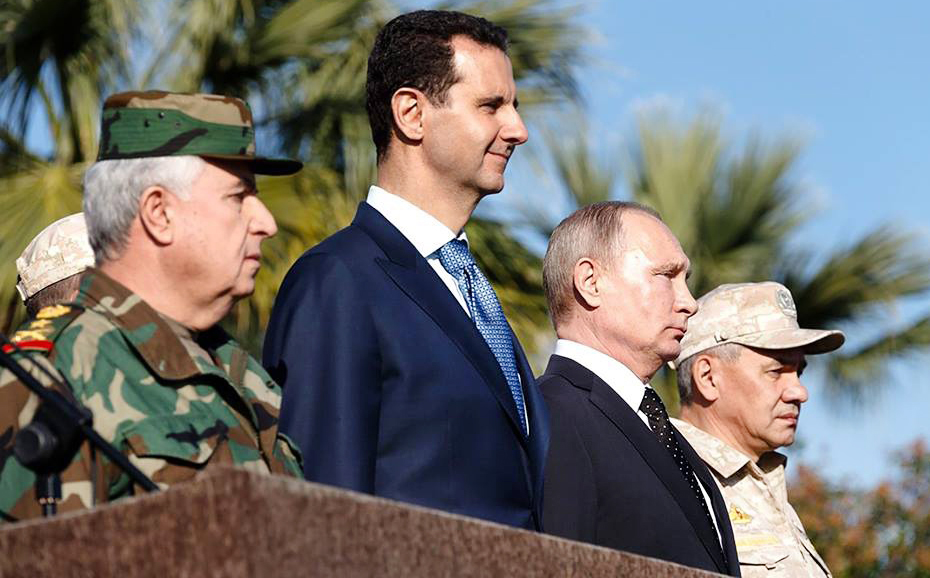 As 2017 drew to a close, Pakistan was put on notice by the US Vice President Mike Pence, on a recent visit to Kabul. Pakistan, which has been a US ally for the last seven decades, is now seriously weighing its options, as China, Turkey, Iran and Russia edge closer to it on matters of defence and the economy.

The last 12 months have seen some major changes in the geopolitical environment, the most significant being that of a comprehensive Russian victory in the Middle East. The conflict in Syria, involving Russia and the US is, arguably, the first of its kind since the Cold War, and in many ways the first Russian ‘victory’ over the United States since the 1956 Suez War.

As the Syrian government and the Syrian Arab Army now control all the major cities in the country, a hugely successful counter-insurgency operation by the Russian military and its Syrian counterpart has resulted in a strategic defeat for the US and its allies, who had hoped to dislodge another government in the Arab world.

In many ways, President Bashar al Assad has become the first leader since Gamal Abdel Nasser to stand up to the joint aggression and blackmail of western powers aiming to change a regime in the Middle East. How did this happen and what lessons are there for Pakistan, given its own disastrous policy of kowtowing to the Americans since 1947?

In the last four years, it has dawned on Pakistan’s military that the security of the region is not determined by American interests.

When the Arab Spring sparked off in the autumn of 2010, the autocratic regimes in Tunisia, Libya, Egypt and Yemen fell quickly. All the leaders of these governments had, at some point, been American allies. Gaddafi had just come out of the cold and had been cosying up to France, UK and the US in the years leading up to his fall, going so far as to giving up his weapons programme.

Ali Abdullah Saleh of Yemen was the pivot on which the American war on terror hinged in the Arabian Peninsula and the Horn of Africa. Hosni Mubarak of Egypt was the leading Arab strongman that the Americans had trusted for 30 years, but when it came to the crunch, he was abandoned and forced to give in to the Islamists. Now, six years later, leading American diplomats regret having let him down.

Other than Tunisia, all of these countries are now in turmoil, with Libya being a springboard for the Islamic State (IS), Al Qaeda and uncontrolled human trafficking to Europe. Yemen is in a brutal state of war, and Saudi and Iranian proxies have brought the country to what the United Nations describe as the “worst humanitarian crisis in the world.”

Egypt is witnessing the most bloody terrorist spell in its history, with weekly attacks on civilians and security services. Iraq has been embroiled in chaos since the American invasion in 2003. By replacing authoritative but stable states, the US and UK have unleashed in the Arab world, a level of terrorism the world has not seen since the Mongol invasion.

In the first six months of the Arab spring, there were no protests in Syria. Leading journalists and media houses, such as the BBC and Al Jazeera, questioned why Syria had not erupted. A poll conducted by Qatar showed that most Syrians preferred Bashar al Assad as their leader. British journalist and author Jonathan Steele wrote in a column for The Guardian, dated January 17, 2012, that the West was in denial about the support enjoyed by the Syrian President. 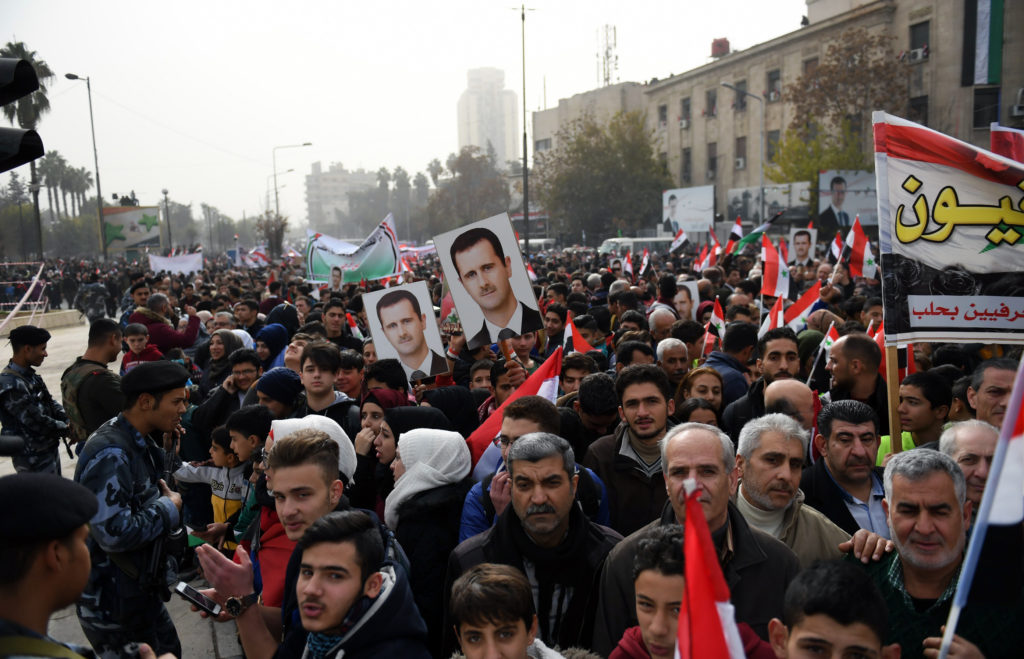 The three most important US policy makers since World War II — Henry Kissinger, Zbignew Brzezinski and Brent Scowcroft — were all opposed to the US leading a war against Syria and President Assad, but were all ignored. The latter two even testified before the Senate Armed Services Committee, that President Assad had more support than all the groups fighting him put together.

Now, after all the false predictions that Assad would fall in a matter of weeks, governments of western countries and their intelligence agencies are seeking Syrian help against terrorist attacks on their own soil, as foreign fighters trained by the West are now bombing European capitals.

The Syrian Republic and its military is one of the most diverse in the Arab world. It is the only country in the Arab world where the top generals are Greek Orthodox Christian, Catholic Maronite, Sunni, Druze and Alawi. Sunnis make up a significant percentage of the army and the president’s support base.

While there are, undoubtedly, many people who are not happy with the regime — much like any other country — there was no need to arm an insurgency to destroy the most ancient country in the Arab world. In an interview, Hamad Bin Jasem, the former prime minister of Qatar, revealed that Qatar had, at the behest of the US, armed and supported rebel groups in Syria.

Similarly, a US National Security Agency document leaked by whistleblower Edward Snowden confirmed that the Saudis had carried out coordinated rocket attacks on Damascus in March 2013.

While the Syrian government remains far from perfect, it is nonetheless legitimate, as it has the support of its people. Their earlier claims that the war in Syria was funded and supported by regional and international players have turned out to be true as the war has unravelled in the past seven years.

While one can question the motives behind the Russian and Iranian intervention, they did so at the behest of a UN-recognised government that still has the major embassies of the world based in Damascus — including China, India, Brazil, South Africa, Indonesia, Malaysia and Pakistan. The two leading militaries of the Arab world — Algeria and Egypt — are also fully behind Syria.

Pakistan has had strong ties with the Syrian military for more than five decades, with joint training, defence procurement and military staff college exchange. Two of Pakistan’s finest pilots led the Syrian Air Force training and advisory program. One of them, Air Commodore Sattar Alvi, shot down Israeli jets in the defence of Syria in the 1973 war.

In 2014, then prime minister Nawaz Sharif, under Saudi pressure, recognised the Syrian National Council as the legitimate representative of the Syrian people. By late 2015, however, the Pakistani military reversed this disastrous decision and sent one of its greatest pilots and former Vice Chief of Air Staff, Air Marshal Athar Bukhari, as Ambassador to Syria. Since his appointment there, he has ramped up the diplomatic activity between the two countries and the speaker of the Syrian Assembly visited Pakistan, while the latter has helped in the development of Syria’s education and health sectors.

Pakistan cannot afford to take sides in the war between Iran and Saudi Arabia. Both these countries have fought each other in Syria, Iraq, Yemen and Afghanistan and have fuelled Pakistan’s own sectarian crisis. Instead, Pakistan must reach out to nationalist countries, such as Algeria, Syria and Egypt — three of the most pluralistic nations in the Arab world. They are far from democratic, but that is their internal matter. They are on the front line, fighting terrorists similar to the ones being fought by Pakistan’s Army.

A hundred years ago, the fight for Damascus was the greatest prize in the Middle East. In the epic film, Lawrence of Arabia, Lawrence, played by Peter O’Toole, tells Field Marshall Allenby that the Arabs would not come for Faisal or the British or the gold, but that they would come for Damascus. Of course, T. E. Lawrence was lying. The men that he had mustered up from the deserts of Arabia were mercenaries, who had nothing in common with the urbane and sophisticated Damascenes, the traders of Aleppo or the noble Arab and Armenian tribes of Deir Al-Zour. Despite all the gold and weapons with which the British supplied the Bedouins from the Arabian Peninsula, under the command of Auda abu Tayi and Nasir Ibn Ali, only 560 Syrians joined the mercenary army of the British.

The residents of Damascus, and other Syrians, then under Ottoman control, were not convinced of the sincerity of Faisal, or Lawrence. While they were no fans of the Ottomans, they did not join the desert tribes of what now makes up Saudi Arabia, Jordan and the Gulf Cooperation Council.

A hundred years on, all efforts to control the big cities of Syria have failed. The uprising in Aleppo did not begin for almost a year-and-a half after the Dera’a incident. The Arab spring reached Syria much later, and when it did, the cities of Damascus and Aleppo did not join in — it was mostly in the rural south and east. (McHugo, John. Syria: From the Great War to Civil War. , 2015, pp 221-224)

According to American officials themselves, there is no real opposition. Even the most credible leader of the opposition to date, Moaz al-Khatib, was of the opinion that the Syrian opposition were foreign-controlled and did not have a local voice. When Khatib wanted to reach out for a political solution, he was vetoed by the Gulf countries and others who wanted to rule over Syria’s fate. Syrian rebels and the opposition are happy earning fat pay cheques and living in five-star hotels in Doha, Paris and Washington DC.

Pakistan has paid a horrendous price in fighting wars for the US and Saudi Arabia; at the same time Iran has also used Pakistan for proxies. The lesson from Damascus, and President Assad’s victory, is to stay clear of threats and carry out your own foreign policy.

Kamal Alam is a Visiting Fellow at The Royal United Services Institute in London.