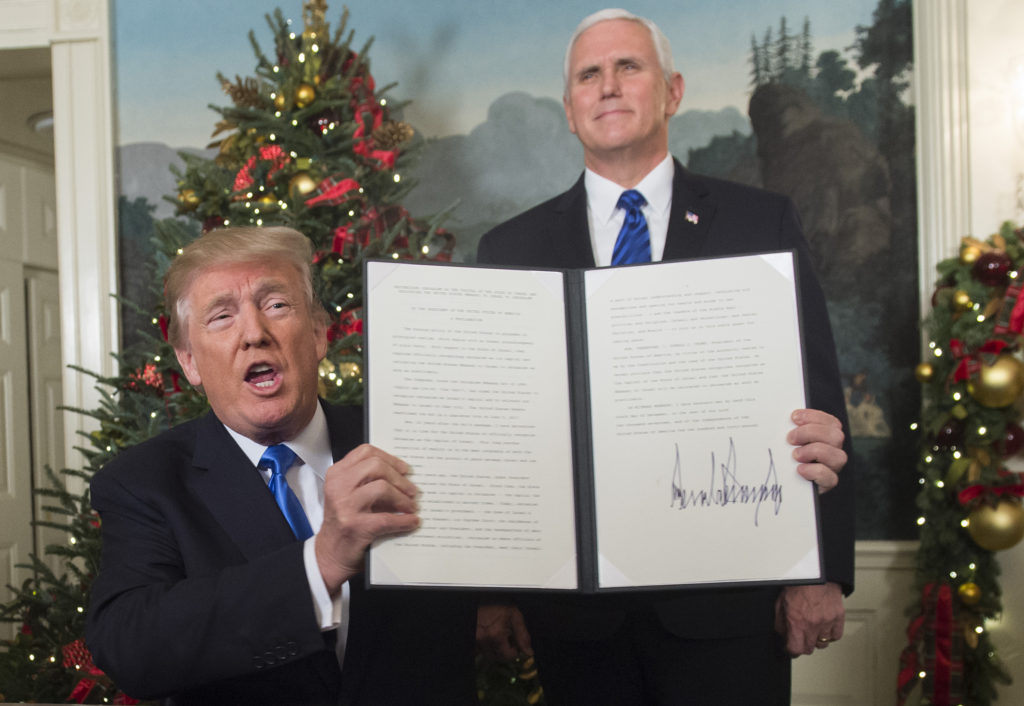 “I will not cease from mental fight,” William Blake wrote more than 200 years ago, “Nor shall my sword sleep in my hand/ Till we have built Jerusalem/ In England’s green and pleasant land.” He wasn’t contemplating the miraculous transfer of the Palestinian territory to the British Isles. The Jerusalem he had in mind was a concept, and in this case, one rooted in Christianity.

There is a parallel between the devout English poet’s wishful thinking and the absurd claim commonly made in recent weeks by Benjamin Netanyahu and various other members of the Israeli government that Jerusalem has been the Jewish capital for 3000 years. The city has, in fact, been Israel’s avowed capital for barely 70 years — and there are good reasons, grounded in international law, for the rest of the world’s refusal to recognise it as such.

Sure, Israel’s parliament, the Knesset, and governmental institutions are all in Jerusalem. However, all foreign missions have chosen Tel Aviv as their base. When Mandatory Palestine was divided by the United Nations seven decades ago, Jerusalem was accorded a special status. Following the 1948 war, it was split between Israel and Jordan. Less than 20 years later, in the wake of the Six-Day War in 1967, Israeli troops captured East Jerusalem from the Jordanians and promptly annexed it.

Ever since, the dominant mantra has been that an undivided Jerusalem is central to the continued existence of Israel. The Palestinian claim to East Jerusalem — not least as the potential capital of a future Palestinian state — has steadily been whittled away by the building of internationally illegal encroachments. In all the so-called peace talks and deals that have hitherto occurred, the fate of Jerusalem has invariably been consigned to “final-status” negotiations. That is, the discussions that are supposed to take place when all other matters have been resolved. The intention on the Israeli side has always been that it would never come to that.

Donald Trump, in officially recognising Jerusalem as the Israeli capital and vowing to shift the US embassy there in due course, explicitly endorsed the Zionist myth-making. Ever since the US Congress, a particularly successful target of the American-based Israeli lobby, resolved that the US mission should be moved from Tel Aviv to Jerusalem, every US president has acknowledged the intention, but deferred any action.

Trump, as everyone knows by now, is determined to be different. Or perhaps he just can’t help it. While many American ambassadorial posts across the Middle East and elsewhere in the world remain unfilled, the president-elect, well before he was sworn in, nominated David Friedman as his emissary in Israel. Friedman is distinguished by a tendency towards views that veer further towards the right than the wildest dreams of the Likud-led Netanyahu administration. 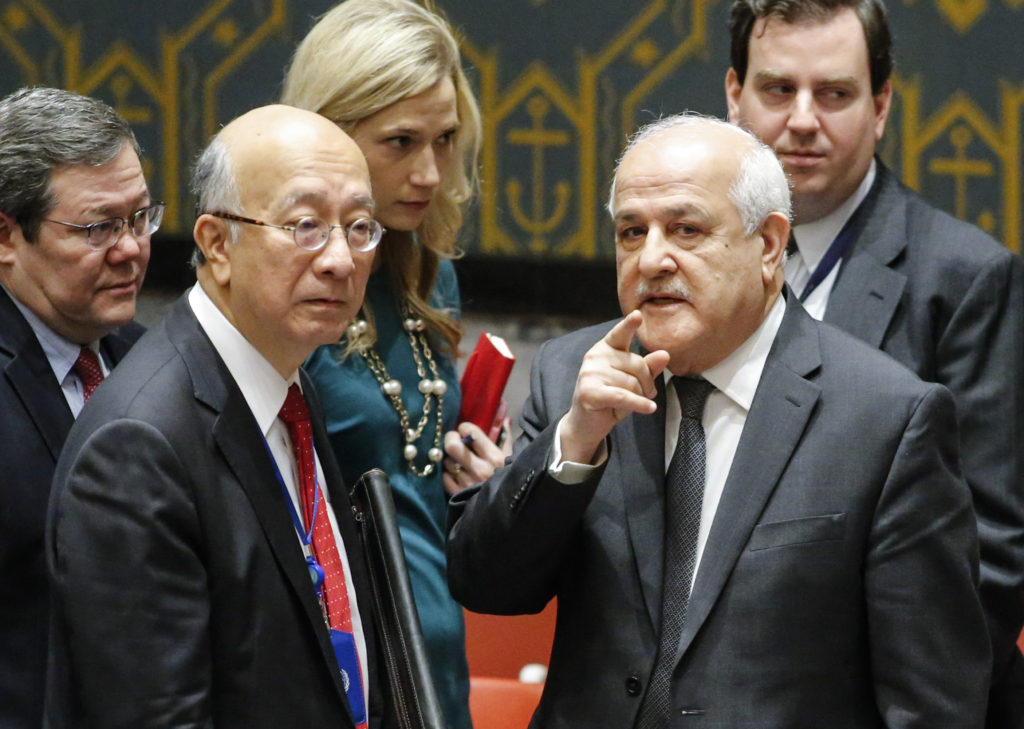 Trump did not stop there. Son-in-law Jared Kushner was singled out as the man best qualified to bring peace to the Middle East. Most of his qualifications remain shrouded in mystery, but his close acquaintances stretch from leading Zionists to the crown princes of Saudi Arabia and Abu Dhabi. His known achievements in the sphere thus far add up to zilch, but there is a high likelihood that he was party to the decision on Jerusalem.

Most US allies across the world clearly were not. Emmanuel Macron of France and even Britain’s Theresa May declared their consternation. American collaborators in the Middle East, from Jordan, Egypt and Turkey to Saudi Arabia, felt obliged to issue condemnations. They were mildly worded in most cases, including in the Egyptian-sponsored resolution that won 14 out of 15 votes in the UN Security Council, but was vetoed by the US.

American ambassador Nikki Haley did not hold back in castigating the United Nations as a whole, and before the same resolution went up before the General Assembly, the former South Carolina governor, once known as Nimrata Randhawa, announced that she would be keeping a close eye on the tally, marking down the recipients of US aid who dared to challenge American supremacy. President Trump characteristically leapt in on Twitter, declaring: fine, go ahead and vote against us; it’ll only save us millions of dollars. (In case anyone hasn’t noticed, money is his chief preoccupation, exemplified by tax legislation that overwhelmingly rewards the rich.)

In the event, 128 nations — including India and Pakistan — voted in favour of the anodyne resolution; there were 35 abstentions and almost as many absences among those, including Canada and Australia, who presumably felt obliged not to irritate the monster in Washington. Only seven other members of the UN voted alongside the US and Israel against the resolution, including Nauru, Micronesia and Togo. Only Honduras and Guatemala, both beholden to their sponsor, count for anything — and Guatemala has gone to the extent of declaring that it too will establish an embassy in Jerusalem. Whoopee.

It’s safe to say that the American initiative has not gone down well internationally. However, to claim that it has effectively killed the peace process would be a gross exaggeration. After all, for whatever it may once have been worth, that process has been dead for many years, even as Israel has kept up its determination to expand Jewish settlements in the occupied West Bank, thereby rendering a two-state solution all but impossible.

What’s more, although votaries of a two-state solution — at least some of them well-intentioned — remain among us, it has been reasonably clear for several years now that this is barely feasible, given the extent to which Israeli citizens have made inroads into the occupied West Bank.

Nor is it true that the US has been exposed as a less-than-honest broker. It was always thus, even if previous administrations made a greater effort to conceal their bias.

But the status quo — which the Netanyahu regime is bent upon retaining, even as it steadily chips away at its edges — is also untenable. The only alternative that remains is a one-state solution, a multi-ethnic and multicultural entity based on a democracy with equal rights for all. Everyone laughed at the late Muammar Gaddafi when he proposed an Israeltine or Palisrael, but on this score he wasn’t far wrong. And, perhaps not surprisingly, leading Palestinian functionaries are more inclined to lean this way rather than their counterparts in Israel, where the idea is deemed conceivable only on the left-wing fringes of society.

How do we get there? Well, one option would be a near-universal embrace of the boycott, divestment and sanctions (BDS) movement, on the kind of scale that eventually roused South Africa from its apartheid torpor. That’s not easily achieved of course, but the vision of Israel and the US versus the rest of the world could be considered a kind of beginning. After all, let’s not forget that Ronald Reagan and Margaret Thatcher were remarkably reluctant to sign up to the ostracisation of apartheid South Africa.

What was indispensable in the transformation of that nation, however, was spirited resistance from within, predominantly black but with a sprinkling of whites. And yes, the phenomenon is echoed in Israel, for instance among the beleaguered Breaking the Silence movement, which gathers the testimonies of Israeli soldiers traumatised by what they are ordered to do, historians such as Ilan Pappe (who, more than any other Israeli writer I have recently read, calls out the fascist attitudes of his compatriots, accurately describes Israel as a colonial-settler entity, and sees the regular military attacks on the Gaza Strip as a creeping genocide), and journalists such as Gideon Levy and Amira Hass.

Writing in Haaretz newspaper, Levy expressed the wish for an “intifada of slappings,” after 16-year-old Ahed Tamimi was arrested for slapping Israeli soldiers who had invaded her home. Just a few days earlier, her 15-year-old cousin had been shot in the head, sustaining a severe injury. Another victim on the same day was Ibrahim Abu Thuraya, a double amputee in a wheelchair. He had no legs, and what kind of risk he might have posed to any Israeli remains undisclosed, but he was, nonetheless, shot dead. 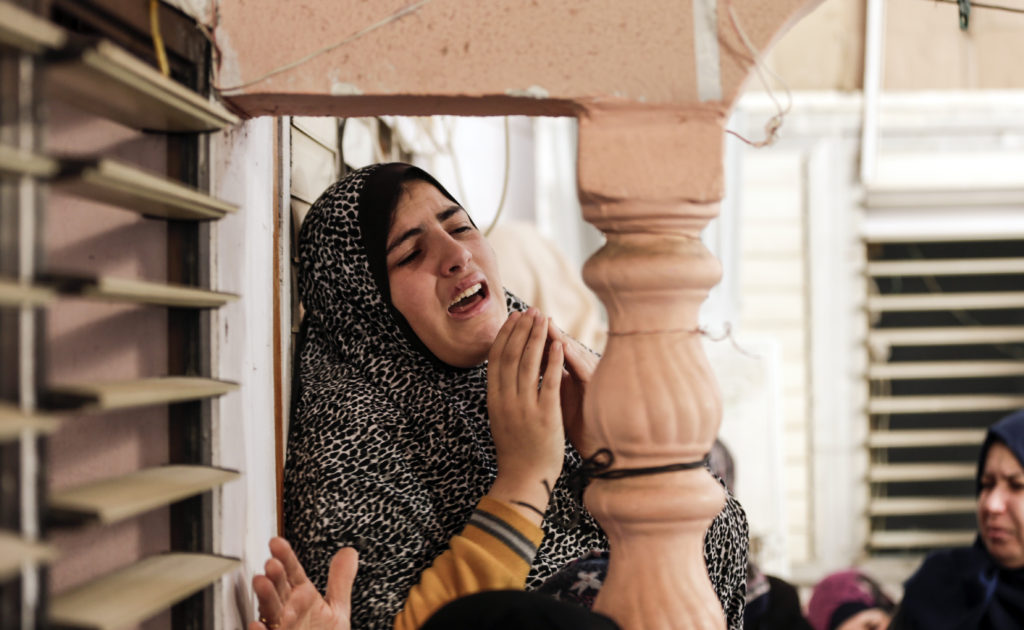 Relatives mourn Jamal Muslih, who died after being wounded by Israeli fire.

Levy extolled Ahed’s chutzpah. Hass’s article on the subject bore the headline: “In Nabi Saleh, the Palestinians aren’t legally blonde” — a reference to the teenager’s wayward curly hair. Her cousin Nour, who had accompanied her in confronting the Israeli soldiers, was also arrested. As was Ahed’s mother, when she made inquiries about her daughter’s detention. At the time of writing, all three remained incarcerated, with Ahed’s remand recently extended. She obviously poses a grave danger, if not to Israel’s security, then at least to its self-esteem. And arresting children has long been a common Israeli practice.

Israel is undoubtedly worthy of slaps, but the fairly gentle ones delivered by the UN will make little difference. They nonetheless entail the wrath of the Trump administration, with a sharp reduction in contributions entailing a grievous budget cut. There has long been a valid argument for the UN to shift its headquarters away from New York. But where exactly could it go, in a world where even the historically least intolerant countries are betraying signs of deepening prejudice?

Meanwhile, the vision of a truly democratic Israel-Palestine, with Jerusalem — considered holy by all three Abrahamic religions, even though the claims of Christianity and Islam have lately been derided by Netanyahu and his closest allies — as its capital, remains a pipe dream. I don’t expect it to come true in my lifetime, but I fervently hope Ahed Tamimi will live to see it.