From General to Supreme Commander 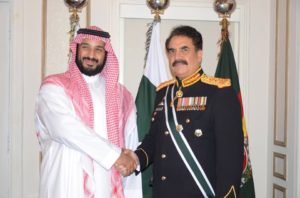 On January 5, 2017, Khawaja Asif, then Pakistan’s minister for defence, confirmed that the former Chief of Army Staff (COAS), General (R) Raheel Sharif, had been appointed supreme commander of the Saudi-led Islamic Military Alliance to Fight Terrorism (IMAFT). The announcement led to the former general’s fall from grace among a public that had hitherto seen him as a saviour of sorts, the key to addressing the nation’s woes. Undaunted by the public’s derision, the government shortly thereafter issued a no-objection certificate to the general, allowing him to join the alliance 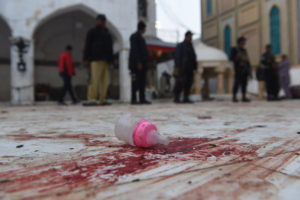 On February 16, the shrine of Lal Shahbaz Qalandar was devasted by a suicide blast that killed at least 88 people and injured 343 others. The Islamic State (IS) claimed responsibility for the attack, which took place inside the shrine during the dhamaal, being performed by the Sufi saint’s followers. On November 17, the Counter Terrorism Department and Rangers arrested 27-year-old Nadir Jakhrani for this act of terror. Jakhrani, the son of a landowner from Kashmore district, Sindh, was previously a member of the Lashkar-e-Jhangvi and later joined the IS. His accomplices, Zulqarnain, Farooq Bangulzai, Aijaz Bangulzai, Saifullah, Tanveer and Ghulam Mustafa, were also arrested. 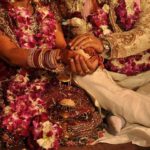 On March 19, President Mamnoon Hussain approved the Hindu Marriage Bill 2017, that had been passed by the Senate on February 18. Under the historic new law, the state officially recognised Hindu marriages and allowed Hindu women to obtain documentary proof of their marriage. As Sindh already had a Hindu marriage law in effect, the new law was to be applicable in Balochistan, Khyber-Pakhtunkhwa and Punjab. 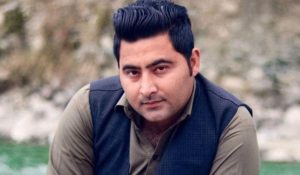 On April 13, Mashal Khan, a 23-year-old student of Abdul Wali Khan University in Mardan, was dragged out of his dorm room by a mob of students, stripped, bludgeoned and shot dead. He had been accused of making blasphemous statements. On September 19, an anti-terrorism court indicted 57 people in the lynching case. Abdullah, an eyewitness and friend of Mashal’s who had also been severely injured during the attack, said in a video statement that he pardoned the suspects. Legal experts pointed out that this would only strengthen the case against the suspects as intimidation of a witness would now be taken into account. 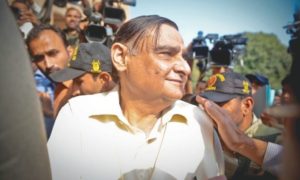 ne of former president Asif Ali Zardari’s right-hand men and college buddies, former minister for petroleum Dr Asim Hussain, was finally granted bail on medical grounds by the Sindh High Court, on March 29. Hussain had, since February 2016, been embroiled in two cases, involving corruption to the tune of Rs 479 billion, when the National Accountability Bureau filed a reference against him.

On August 26, 2015, the Sindh Rangers took him into custody. Since then, Hussain left no stone unturned in reminding the court of his fragile medical condition and need for treatment. And once the Supreme Court gave him permission to fly abroad — for a month, for medical treatment — on August 29, 2017, Hussain wasted no time in bolting. He did return within the stipulated time, but only to start singing paeans of praise for the army. On November 17, he was removed from his post as the PPP’s Karachi president for meeting MQM-P Chief Farooq Sattar without informing the party. 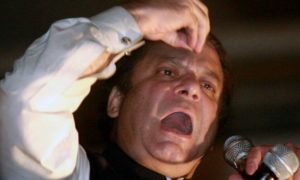 On April 20, Pakistan’s Supreme Court ordered, through a split verdict, the formation of a six-person joint investigation team (JIT), to probe whether then prime minister Nawaz Sharif and his family had accumulated wealth beyond their known sources of income. The JIT submitted its report to the Supreme Court on July 10, and on July 28, the court disqualified Sharif from holding public office on the grounds that he was not ‘honest’ or ‘truthful,’ since he had not mentioned in his nomination papers that he drew a salary from Capital FZE — a Dubai-based company. 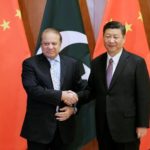 The Long Term Plan for the China Pakistan Economic Corridor (CPEC) was unveiled for the first time, at the One Belt One Road Forum, on May 15. Then prime minister, Nawaz Sharif attended the summit to finalise the details relating to CPEC over the next 15 years. Reportedly, one of the main features revealed was the leasing out of vast quantities of agricultural land to Chinese businesses, visa-free entry into Pakistan for Chinese nationals, and the setting up of a close monitoring system for security purposes, in all cities in Pakistan. 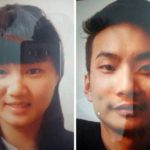 Two Chinese nationals running a Chinese language centre were abducted from Jinnah Town, Quetta, on May 24. By October 30, both abductees, a 24-year-old woman and a 26-year-old man, were confirmed dead on the basis of DNA reports. The Islamic State had made claims in June of having killed the two foreigners, who were reportedly Christian missionaries.

The Pakistan Bureau of Statistics revealed to the Council of Common Interests, on August 25, the provisional results of the 2017 Population Census of Pakistan, the first phase of which had been initiated on March 15. The final report of the census is expected in 2018 and, if released well in advance of the general elections, has the potential of influencing its outcome, since constituencies will have to be redrawn according to the latest population figures. 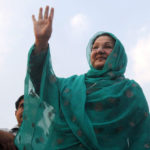 Kulsoom Nawaz, wife of former prime minister Nawaz Sharif, who is currently under treatment for cancer in London, won the NA-120 by-election, held on September 18, while PTI candidate Yasmin Rashid came in second. Two religious outfits, the Tehreek-e-Labbaik — which got the third highest votes — and the Milli Muslim League, collectively garnered 11 per cent of the total votes cast.

Confessions of a Kingpin 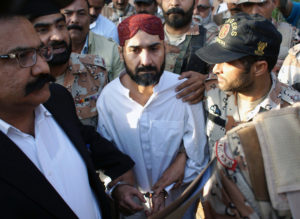 On October 10, details of the confessional statement of Lyari gangster Uzair Baloch were made public by the local media. Uzair’s statement, made before a judicial magistrate on April 24, 2016, was submitted to the Sindh High Court. The kingpin of the Lyari underworld made numerous revelations, including the submission of Rs 10 million in extortion money to PPP MNA Faryal Talpur every month; facilitating Zardari’s foster brother, Owais Muzaffar alias ‘Tapi,’ in his illegal occupation of 14 sugar mills; having 500 criminals on his payroll and committing various other criminal acts for the PPP, such as land encroachment. Fearing vengeance from Zardari after having confessed, Uzair requested to be provided full protection.

Paying For A Man’s Sins

A 16-year-old girl was reportedly stripped naked and paraded around the streets of the Matt locality of Dera Ismail Khan, in revenge for her brother’s three-year affair with a local woman. A panchayat — local council — in a joint decision with the taluka nazim, had already fined the boy’s family Rs 250,000. The police arrested eight suspects involved in the incident and on November 21, the Peshawar High Court ordered Khyber-Pakhtunkhwa’s Directorate of Human Rights to oversee the investigation.

Mullahs on the Warpath 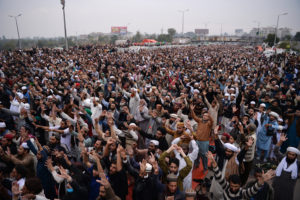 On November 8, activists of the Tehreek-e-Labbaik Ya Rasool Allah (TLY), the Sunni Tehreek Pakistan (ST) and the Tehreek-e-Khatm-e-Nabuwwat (TKN), staged a 20-day-long dharna at the Faizabad interchange in Islamabad. They were protesting against an ammendment in the Khatm-e-Nabuwwat oath of the Elections Act 2017, regarding the finality of the prophethood of Prophet Muhammad (PBUH) and demanded the resignation of the then law minister Zahid Hamid, whom they held responsible for the re-wording of the clause.

Despite the Islamabad High Court’s (IHC) November 17 order that the government remove protesters from the Faizabad interchange within 24 hours “using any means necessary,” the Islamabad administration had failed to do so owing to Interior Minister Ahsan Iqbal’s attempts to resolve the matter through dialogue and not confrontation.

On November 27, the government caved in to the protestors’ demands and Zahid Hamid resigned as law minister, even though the IHC had called the protest illegal. Khadim Hussain Rizvi, leader of the TLY, and the PML-N government signed an agreement after which Rizvi announced the end of the sit-ins which had now spread to several other cities of Pakistan, including Peshawar, Lahore and Karachi. The DG Punjab Rangers, Major General Azhar Naveed distributed envelopes containing Rs 1,000 among the protestors of the religious outfits; it was reportedly their bus fare to return home. 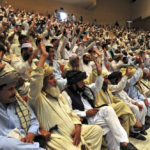 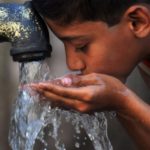 On December 6, the Supreme Court of Pakistan summoned Sindh Chief Minister Murad Ali Shah and notified him regarding the unavailability of clean drinking water across most of Sindh, terming it a failure on the part of the provincial government. The court gave the CM a year to resolve the matter.

The federal government, on December 11, announced its intention of delaying the presentation of the Federally Administered Tribal Areas (FATA) reforms bill, without providing plausible reasons for doing so. In response, the opposition benches decided to boycott the National Assembly until, they said, the highly anticipated bill would be tabled. On December 13, COAS Qamar Bajwa announced, during consultations with tribal elders from FATA, that the Pakistan Army supported the mainstreaming of FATA. 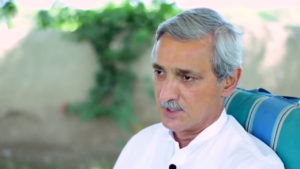 On December 15, the Supreme Court disqualified for life the PTI Secretary General Jahangir Tareen, under Article 62(1)(f), for failing to disclose in his nomination papers, the offshore company named SVL, established for his Hyde House property. The court, however, did not disqualify party chairman Imran Khan, ruling that he was not required to declare in his nomination papers, Niazi Services Ltd, an offshore company, as he was not a shareholder in the company. The very next day, Tareen tendered his resignation as secretary general of the PTI, but said that he would “remain part of the struggle.”