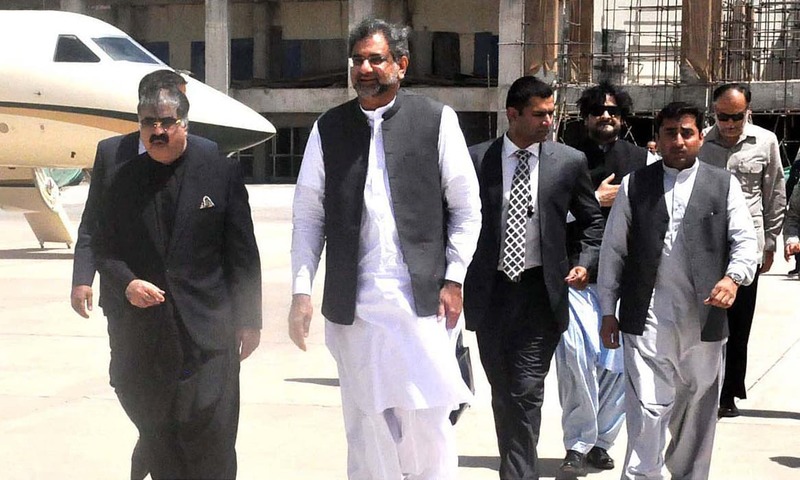 A friend in need: Prime Minister Shahid Khan Abbasi in Quetta, in November 2017

It is 2018 — the election year — and political leaders are making tall promises to ensure their victory in the forthcoming polls. Even Prime Minister Shahid Khaqan Abbasi made a trip to Quetta in November, where he announced the launch of a 10-year development package for Balochistan.

Referred to as the Equalisation Development Programme, the 10 year uplift plan aims to bring Balochistan at par with the country’s other three provinces in terms of socio-economic development. The proposed development package will include projects for the provision of gas, education and health facilities at the union council level. The federal and provincial governments will jointly fund the equalisation development package.

These are the only details of the programme that have been made public so far. There is no information on the specifics of the project and how it is to be implemented. A project of this magnitude requires detailed workings and it is not clear if the government has done its homework or has simply announced the package.

The PML-N government seems to be attempting to replicate the last PPP government’s Aghaz-e-Haqooq Balochistan Package 2010, which was endorsed by all parties in parliament at the time, and which acknowledged the wrongdoings in Balochistan and attempted to compensate the province.

Among other things, the package provided 5,000 jobs to the youth of Balochistan and the vacant seats on Balochistan’s quota in the federal government were filled. It also included political and administrative reforms. Although this package was not fully implemented, the PPP counts it as one of its major accomplishments.

Given the state of its backwardness, Balochistan is in dire need of a mega economic development package. The level of its backwardness can be gauged from some of the reports on the state of poverty, education and health in the province. According to the Multidimensional Poverty report, 2016, 71 per cent of the people in Balochistan are multidimensionally poor — i.e. they suffer from multiple disadvantages. According to the District Education Rankings launched by Alif Ailan in December, Balochistan ranks the lowest among all provinces in all education scores. And it doesn’t end there. According to Dr. Irshad Danish, National Manager for Pakistan Scaling up Nutrition (SUN) Movement, 88 per cent of the people cannot afford a balanced diet.

Since coming to power in 2013, the PML-N government has not done anything consequential for Balochistan — something that can parallel the Aghaz-e-Haqooq Balochistan Package of the PPP government. This Equalisation Development Package of the PML-N, which is four years too late, seems to be an attempt to cover this gap. However, the way it has been announced has drawn a lot of criticism.

According to Mahfooz Ali Khan, a former finance secretary of Balochistan, this project cannot be meaningful, as all development projects have to be funded from the Public Sector Development Programmes (PSDPs) and presently, there is no room in the PSDPs of Balochistan and the federal government, for any mega project. Consequently, this project technically, cannot be implemented.

An official in the provincial government, who does not wish to be named, expresses similar views. “I don’t think that there is enough time left with the government to even prepare a feasibility report for this mega project, let alone implement it,” he maintains.

Provincial government officials were not available for comment on the Equalisation Development Package.

The project seems to be an ‘Election Lollipop.’ Given the political climate in the country, one can not say with any certainty how long the PML-N governments at the centre and in the province, will last. But even if they do, they do not have more than seven months, at best, to implement a long-term project.

Given the economic backwardness of the province, it is imperative that one determine what is wrong with the way in which development is approached. Every year, ostensibly tens of billions of rupees are spent on development, but there is no trickle-down effect. Even in the ongoing fiscal year, the Balochistan government is reportedly spending Rs. 86 billion on development alone. That’s a huge amount by most standards, but at the end of the year, one cannot see its impact on the ground. Why?

There are several reasons for this, and most of them have to do with bad governance and corruption. Development projects undertaken by the Balochistan government every year, are far too many in number. The reason for this is that the provincial government has to reward each and every member of the assembly by finding projects which will benefit each one of them or their close supporters.

Consequently, the development funds are frittered away. This inconvenient truth is no secret, but no one is willing to take any corrective measures.

Moreover, there are flaws in the approach of both the federal and provincial governments while addressing development issues in Balochistan. For example, the government is building several new universities in Balochistan, without any plan to provide employment opportunities for the students who will be graduating from these universities. There are more than 25,000 vacancies in the provincial government, but no effort has been made to recruit unemployed graduates on these vacancies. The government has failed to set up a single venture that can generate large-scale employment in the private sector.

The need of the hour is that Balochistan’s development be made part of the country’s national agenda. And any political party that comes to power must pledge to follow the agenda. It must focus on generating employment in the private sector. Political gimmicks such as the equalisation development package must be avoided at all costs.

Those at the helm must realise that the ongoing insurgency in Balochistan is linked to its abysmal socio-economic conditions. In order to bring durable peace and prosperity to the province, its economic problems need to be addressed
seriously — and without any further
delay.