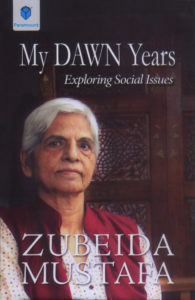 What makes a life interesting, well lived? Doing something you love, despite the adjustments that have to be made, and doing it well; travelling to new countries; meeting new people; making professional contacts with a wide range of people – and then leaving the world on a high note. That would be the definition of a life well and fully lived.

Judging by that criteria, Zubeida Mustafa, journalist turned social activist, has led a truly remarkable life. In her book, detailing her 30 plus years working in Dawn’s editorial department, she brings her own unique perspective to how she started out, and how she — and the paper — evolved over the years, with the changing times and the fast-moving wheels of technology. My DAWN Years — Exploring Social Issues is not just an account of an individual’s life but that of an institution, and on occasion, it is difficult to extricate one from the other.

Starting out in 1975 in a predominantly male organisation, as Dawn then was, journalist and human rights activist Zohra Yusuf points out in her foreword that surprisingly, Zubeida’s “biggest supporter and mentor turned out to be the editor himself, Ahmad Ali Khan.” A former researcher at the Pakistan Institute of International Affairs (PIIA), Zubeida “became a mentor to the steady stream of young women who gradually joined Dawn and launched their own careers in journalism.”

Unfailingly modest and low-key, Zubeida is quick to point out that she was preceded by some great female names in journalism — Zebunissa Hamidullah, Anis Mirza, Alys Faiz, Zuhra Karim, and the inimitable Razia Bhatti (who received the IWMF Courage in Journalism Award in 1994, two years before her untimely death), to name just a few in this galaxy of stars. She has also acknowledged the women working in Urdu and Sindhi journalism.

Zubeida received a Lifetime Achievement Award from the International Women’s Media Foundation (IWMF) in 2012. It was the jewel in her crown to top off a hugely successful career, that combined her work and her passion for the social sector — education and health – in addition to writing editorials on international political issues.

The trajectory of Zubeida’s career at Dawn, where she started out as assistant editor is interesting and shows that women, even soft-spoken, low-key ones, can create a niche for themselves. As she mentions in the book, she told Alana Barton of the IWMF that what she could lay claim to was “being the first (woman) at the decision-making level in the mainstream media. From that position I played a dual role. First, I would inject the women’s perspective in the subjects Dawn would cover editorially and also in news reporting. That allowed the social-political-economic issues affecting women directly to find more space in the newspaper and from the feminist perspective….Secondly, my presence facilitated the opening of doors for other aspiring women journalists.”

Zubeida talks of many things in her book: her work and her colleagues; the state of the social sector in Pakistan; her travel adventures and misadventures; the changes in the printing process that she was witness to; the benefits and downside of technology for the print media; pre-censorship during the Zia years – and finally, whether women can “have it all.” The best part of reading a woman’s biography, is that it gives a far more holistic picture of a life.

Soon after she joined Dawn in July 1975, the editor had asked Zubeida to start writing on social sector issues as well. Since education, population, healthcare and children, were not considered ‘politically sensitive’ areas, Zubeida says she “found myself showing the way in deciding the line the paper should take.” This also led to her subsequent passionate crusade for children to be taught in their own language first, before having English foisted on them. And that later led to her much acclaimed book, The Tyranny of Language in Education.

Zubeida undertook different assignments in Dawn. The Book Page (now Books and Authors) was a new fortnightly addition and Zubeida was requested to edit it, alternating with the Health Page, which she was already in charge of. She edited this page for a decade, and mentions how proud she felt “to be on the staff of a paper which was so ethical and moral in these matters (of copyright) which often carry no weight in Pakistan.” She started several pages, at the behest of ‘Khan Sahib’ and “once I had managed to develop it…he would give me a new assignment and one of my colleagues would be given charge of what I surrendered…I did not mind this as it ensured that I was never tortured by monotony… and it allowed my creativity room to experiment with new concepts.”

Writing about her ‘Social Sector Experiences,’ Zubeida says she has “seen Pakistan through the lens of the disadvantaged classes…hapless victims of a state afflicted by a severe deficit of social justice.” She is equally scathing of the media reporting on these sectors which, she says “is characterised by its inability to place problems in the context of inequity and social stratification. It has come to accept that Pakistan is split into the world of the haves and the miserable world of the have-nots who constitute nearly 70 per cent of the population.”

The ‘Personal Becomes Professional,’ the second but last chapter, reflects the inevitable choices working women with families have to make: “Those who believe that a woman can keep her personal and professional lives apart and not let one impinge on the other are grossly mistaken.” And goes on to ask poignant questions such as, whether marriages should be preserved even if there is no affection or understanding between the partners? For such a private person to have broached the subject and mention her own personal issues, must have been hard. And she acknowledges that, but for her economic empowerment, courtesy her job and her flexible work environment, that decision would have been difficult to take.

That flexibility is perhaps symptomatic of the organisation. “Dawn’s tradition as an employer had been quite impeccable and the work environment was unmatched. People were treated with dignity… Dawn was an exception where a professional editor produced the paper and the proprietors kept their hands off from editorial matters.” And the editors honoured the delicate balancing act. Zubeida mentions that Abbas Nasir, “the first of the young generation editors of Dawn” said he was careful to observe certain boundaries to avoid the paper taking a backlash and costing thousands of people their jobs, because he wasn’t sure a “single act of defiance was worth so much human agony.”

So why did Zubeida leave Dawn at her peak in 2005 (although she has kept on writing for the paper)? It seems there were several reasons. The professional — “technology has worked against newspapers…newspaper circulations have been falling…the print media will have to reinvent itself.” The personal — with failing eyesight (Retinal Pigmentosa), a genetic disorder, she decided to focus on doing things other than Dawn, though she found it extremely hard to adjust to a new routine post-retirement. But being Zubeida, she ensured she kept busy, writing weekly columns, writing editorials when requested by the editor and contributing articles to foreign publications, in addition to travelling and editing. She mentions, dispassionately, the problems of being ‘less’ sighted and her trepidation about when the light goes out completely. But she also mentions how keen her tactile and other senses have become, and how that helps compensate. And she is doing what she has been campaigning for – teaching under-privileged children how to think critically in their own language first, and to communicate in English as well.

I’ve travelled each and every highway

Yes, there were times, I’m sure you knew

When I bit off more than I could chew

Regrets, I’ve had a few

But then again, too few to mention

But more, much more than this