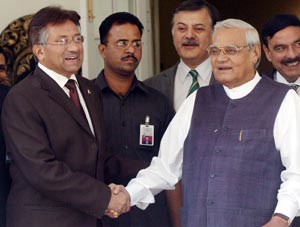 relations between India and Pakistan by Newsline, I am tempted to touch upon an event in the life of poet William Butler Yeats. It was during the First World War that he was asked to write a war poem for a collection that was apparently meant to promote nationalistic fervour. Yeats promptly refused to do that. And being the poet that he was, he composed his refusal in verse.

Hence we have this beautiful little poem of just six lines, titled simply as On Being Asked for a War Poem. Not being a poet, what options do I have? Let me turn to the Yeats poem to see if I can get some inspiration from it. Here it is: “I think it better that in times like these/A poet keep his mouth shut, for in truth/We have no gift to set a statesman right/He has had enough of meddling who can please/A young girl in the indolence of her youth/ Or an old man upon a winter’s night.”

Now journalists who write on current affairs are expected to try and set statesmen right, though it is inherently a futile exercise. In fact, instead of statesmen, we have to deal largely with dumb politicians and, at least in Pakistan’s case, their national security handlers. What matters is that they can hardly be guided by reason that is dictated by harsh realities or by human emotions that are interpreted by poets and visionaries.

So, on being asked to write on the on-again, off-again bilateral relationship between India and Pakistan, my initial feeling was to say no. But then I thought it may be worthwhile to try to explain why a supposedly profound analysis of the latest developments at the official level would be pointless. Yes, we just had another round of talks, this time focusing on trade relations and they again reported a ‘thaw’ — as if a new beginning was being made.

But where will it take us if the ruling ideas in both countries survive? Already, there is some confusion about the approval of this initiative by the Pakistan military — a professedly India-centric outfit that holds a veto power in this and some other crucial national policies. We have a history of coming very close to a breakthrough and being rebuffed by a Kargil or a terrorist attack or, simply, by some silly statement by a hardliner on either side.

Indeed, some promises made by the leaders of the two countries during their infrequent encounters were more fervent than vows exchanged by youthful lovers. Vajpayee came to Lahore in a bus and assured us that the course of history in South Asia had changed. When Musharraf left for Agra, he proudly proclaimed that he would change history. In New Delhi, on the sidelines of a cricket match, Musharraf met Manmohan Singh and both of them agreed that borders should become irrelevant. And so on.

But what has been happening on the ground during this time? There are times, certainly, when hopes rise. But never to a level where the two countries can behave like rational and reasonable neighbours. This does not happen — has not happened yet — in spite of the fact that no sane person can understand the animosity and the mistrust that has been preserved by the two governments. One example of this is the visa regime — and they have been talking about it for years and years.

Against this backdrop, I think it better to paraphrase Yeats: that in times like these a journalist should keep his mouth shut, for in truth we have no magic wand to change the mindsets of our rulers. All we can do is wait, while our two governments play their diplomatic games, for a paradigm shift. Those of us who have a sense of history know that this will come. The only suspense is about the price that the citizens of the two countries will have to pay in this potentially surreal interregnum.

Incidentally, the peg for this piece is not so much the new developments on Pakistan’s somewhat ambivalent resolve to give India the Most Favoured Nation status in trade, as the week-long visit to Karachi by a delegation of the members of the Mumbai Press Club in the latter half of November. Now, it too underlined the insanity of the official relations between the two countries, considering the love and affection that it evoked at the human level.

This visit was launched with a roundtable at the Karachi Press Club, the host organisation. Of course, there were hints on this occasion of the jingoistic points of view. We do have journalists who are wedded to the ruling ideas. It seems obligatory, on such occasions, to chew the cud — with big bites of Kashmir.

Once again, it seemed that we were riding a merry-go-round. And there is little joy in doing this. So what does one do? The silver lining is the opportunity that arrives, once in a blue moon, to visit the other country for a formal meeting and be amazed by the world of difference that exists between the official policy and the human network that stretches out to our hearts and our homes. 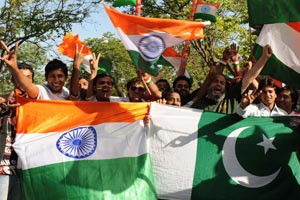 The other point is that South Asia, in its obsession with Partition and the attendant bloodshed, has remained in denial of history as it has transformed the rest of the world. In this real world, animosities have been erased and new alliances forged in the larger interests of the people, particularly in the economic and cultural spheres. How long can we hide from history?

Some years ago, when the SAARC summit was being held in Kathmandu, I was asked by Himal magazine to write a piece on one of the above subjects. I said that I could only do a subjective piece about my own family and about other human-interest stories. It turned out rather well.

To conclude, let me recall just one story. In 1997, the Jang Group, with the collaboration of a German foundation, held a seminar in Karachi on how civil society in the two countries could assist in the peace process and a number of Indian participants were present. One of them was a social activist from New Delhi, whose parents had migrated from Rawalpindi and he was born after Partition.

In his speech, he said that he had always looked at Pakistan as a country hostile to India and was uncertain about how he would be received in Pakistan. Now, we had really gone out of our way to welcome our guests, particularly the ones who had come via Lahore — the lost paradise of the Punjabis on the other side.

Overwhelmed by his reception, he narrated a family episode. He said that one of his uncles had fallen out with his father and had migrated to the United Kingdom. Tales were told of how unreasonable this uncle had been. But he had an opportunity to visit his estranged uncle in London and heard the other side of the story, which was totally different. At this point, this speaker in such a solemn environment began to cry. He cried like a baby and we had to stop the proceedings and calm him down. As I said, this happened in 1997 and there has been business as usual in the power corridors of the two countries.

This article originally appeared in the December 2011 issue of Newsline under the headline “Animosity As Usual.”