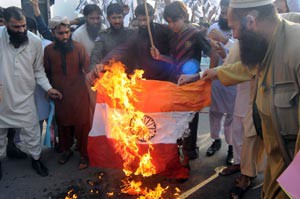 Economic relations with this rising economic power will now be on the same plane as with any other country of the world.

The Pakistani establishment and some local industrial and agricultural lobbies argue against the normalisation of economic relations with India. Their argument is mainly based on two assumptions. One, that the people of Pakistan do not want any trade relations with India unless the Kashmir issue is resolved; and two, the Indian industry will wipe out our industries and agriculture.

But now most of the stakeholders agree that Pakistan should give MFN status to India. The process of finalising the negative list by Pakistan has already started. Meanwhile, India has to work on the removal of non-tariff barriers, especially if there are any specific to Pakistan. The MFN status will then become effective in February 2012.

Let’s deal with the misperception that the people of Pakistan are averse to the normalisation of economic relations with India. Approximately 34 million households in the country buy an Indian film DVD over the weekend, or surf an Indian channel to watch a movie or soppy soap on the cable network. But the Indians are not benefitting from this trade, neither are the Pakistanis for that matter, because all Indian movies sold or shown on cable networks are pirated. Had this been legalised, both sides would have benefitted financially from it. The Indians would receive their royalty and the Pakistani government would earn revenue from this presently illicit trade.

The positive message emanating from this flourishing ‘illegal trade’ is that the people of Pakistan have no aversion to India as is commonly believed on the other side of the border. There was a time when Pakistani TV plays were as popular in India as Indian films are in Pakistan. And that is not all. If you walk down the lanes of the ‘Paan Market’ in Lahore’s Anarkali bazaar, you will find many Indian products which are brought in by travellers who travel by the Samjhota Express twice a week. The demand for Indian goods is very high, a shopkeeper admitted to me, but the supply is low. So would the solution lie in selling counterfeit products like ‘Baba tobacco’ and ‘paan masala,’ or would it make more sense to import them legally?

On the other hand, a leading commodity importer, Raees Ashraf Tar Mohammed, points to another problem. He reveals that imports of spices and edible commodities from India through the Karachi and Lahore dry port is declining fast. He explains that much of the trade of commodities on which sales tax, import duty and withholding tax are levied, has been redirected through the LoC (Kashmir-to-Kashmir), as they are subject to only 2% withholding tax. Businessmen who trade in commodities on a day-to-day basis are not happy with the LoC’s duty-free trade, and the government is losing revenue. This route, however, has opened a good business avenue for Kashmiris living on both sides of Kashmir. Indeed, this is a good beginning for the normalisation of relations and easing the problems of the beleaguered Kashmiris.

On both sides of the border, however, some politicians, bigots, terrorists, foreign office babus and those who thrive on the war economy try to make the normalisation of relations between the two countries as difficult as possible. But where there is a market, the people are ahead of the bureaucracy when trading goods.

Estimates are that the unofficial trade between the two countries amounts to over $2 billion. This does not include smuggled items, which move both ways depending on the market price. Officially, Pakistan’s total trade with India is around $2 billion. At present, the balance of trade with India is tilted against Pakistan. Last year our imports from India were roughly US$1.7 billion, while exports were US$262 million. Interestingly, in the same period our imports from UAE were over US$5 billion, while our exports to the Emirates were meagre. Now everybody in the trading community knows that the bulk of imports from the UAE were actually of Indian origin. This shows that the existing system, under which only 2,000 items are allowed to be imported from India under the positive list, does not reflect the real appetite for Indian goods. The only problem is that import via third countries makes these products expensive for Pakistani consumers.

Some of Pakistan’s exports to India are cement, textiles and dry dates. But the export figures are not particularly impressive. For instance, trade with India can shoot up if hurdles in the way of the export of cement to India are removed. From over 786,000 tonnes in cement exports to India in 2007-08, trade has dropped to 336,000 tonnes in the last nine months of 2009-10, although the price has come down from US $55 per tonne to US $50 per tonne.

Pakistan’s leading businessman Mian Mohammed Mansha, an ardent supporter of expanding economic relations with India, says: “We must not only increase trade between the two countries, but also invest in each other’s countries.” Although in the case of cement exports to India, Mansha, who is himself a large cement producer, says, “I am quite disappointed by the non-tariff trade barriers used by the Indian government.” Explaining the problems faced by cement exporters, he spoke first of a cement quality check which takes a long time and is necessary for all exports from Pakistan. Secondly, the frequency of trains for carrying this bulk item was not enough to meet orders because wagons were not made available on the other side. Thirdly, the Indian government has made transportation through trucks difficult by restricting parking space. Mian Mansha believes that if these barriers are removed and free exports from Pakistan are allowed, it would be beneficial for consumers in India, as cement is available at almost half the price in Pakistan, as compared to the prevailing price per bag in Indian Punjab. He lauded the fact that the Pakistan government had been cooperative with the cement industry exporting to India.

Other exporters from Pakistan believe that cement is just one example of the protectionist policies of India, though officially they have also given Pakistan MFN status. “I think that the Indian cement manufacturers lobby creates these difficulties to keep cement prices up. Admittedly, this protectionism is not one-sided; some Pakistani manufacturers also try to discourage imports from India,” says a Pakistani exporter.

In spite of this, businessmen like Mian Mansha feel that they can operate textile industry outlets in India, because the Pakistani fabric is popular with the Indian consumers. Since Mansha is also chairman of Muslim Commercial Bank in Pakistan, he is keen to expand banking relations with India.

A leading textile industrialist, who owns a popular fabric brand for women and exports bed sheets and table linen, once told me that he wanted to open his outlets in India but was dissuaded by the Pakistani authorities. There are many others who see India as a potential market. In fact, since the ’90s, a paradigm shift has been observed in the position taken by the Pakistani business community vis-Ã -vis economic relations with India. The same class that was opposed to opening up trade with India in the past, fearing that they would not be able to compete in the open market, is now in favour of it. What brought about this change of heart?

One, Pakistan’s businesses grew under protectionist policies and reached a level of confidence where they were open to competition. Two, as the Indian rupee became stronger and the cost of production in India went up, Pakistani businessmen felt that they could not only compete in the home market, they could have access to the Indian market of over one billion people. Three, their fear that they would not be able to compete with India dissipated once they braved the avalanche of cheap Chinese products coming into Pakistan.

Textile is not the only sector where Pakistan can achieve fruitful results. Pakistan could be a major beneficiary if it were to choose to work with the Indian IT industry. India’s IT exports fetch them over US $50 billion a year. The cost of doing BPO (Business Process Outsourcing) in India is rising. Many IT industry leaders have told me that they would be more than happy to invest in the local IT industry and outsource business to Pakistan.

While the main focus of both the countries has been on trade relations, the governments of both countries are wary about allowing investment in each other’s countries. Given the fact that we share many business communities like Sindhi Hindus, Parsis, Gujratis, Punjabis and Bohris, there is a great scope for investment in each other’s countries. A leading hotelier, Byram Avari, believes that peace between the two countries would be strengthened if businessmen were to have long-term investments in each other’s country. The expansion of economic relations could create a strong foundation for lasting peace only if our establishment were to allow delinking it from complex historical disputes. India and China have relegated their issues to the backburner and, today, China is India’s biggest trade partner.

This article originally appeared in the December 2011 issue of Newsline under the headline “Removing Roadblocks.”