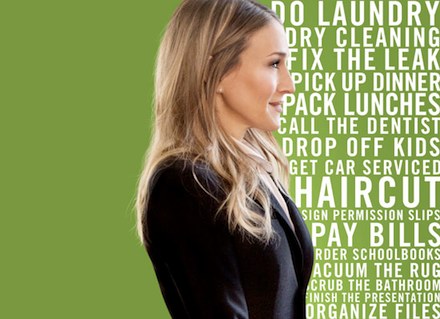 Based on the book by British author Allison Pearson published in 2002, I Don’t Know How She Does It, directed by Douglas McGrath (Emma and Infamous) is replete with the most brilliant stereotypes of successful people, as well as a perky voice-over that hearkens back to Sex and the City days when Carrie (Sara Jessica Parker) constantly holds forth on modern relationships, marriage and love. In similar fashion, in I Don’t Know How She Does It, Parker appears as a Carrie metamorphosis of a working wife and mom — a movie that could also have been called “Sex and the City: The Movie – Part Three” — minus the three perky friends.

Boston-based hedge-fund manager Kate Reddy (Parker) juggles a high-stress job, two small children, a nanny, and a pretty understanding husband, Richard Reddy (Greg Kinnear). Richard succumbs to all the lists she must make to manage her hectic lifestyle. Kate’s nemesis is the stay-at-home mom, the queen of the school bake-sale, an event that Kate is often doomed to fail, especially when the sum of all her efforts is a store-bought pie stuffed into a Pyrex dish.

When Kate is offered an opportunity to pitch a deal with Jack Abelhammer (Pierce Brosnan), she must take it to prove that she too can succeed in this macho world of big-buck management. Even though her hubby is conveniently struggling as a part-time architect, Kate really has no financial worries (she lives in a fancy townhouse with a full-time nanny) her troubles are not those of the struggling middle-class. She appoints Richard to manage home and hearth as a convenient househusband and ventures on her new mission, ably assisted by her poker-faced assistant Momo (Asian-American actress Olivia Munn) who appears more of a caricature than a real human being. So what if she has a degree from Harvard and is totally obsessed with her career, must she be that cold? In comparison Kate’s high-pitched personality keeps her closer to human as she manages the two ends of her life with cheerful hysteria — and the constant, niggling Carrie-like voice-over.

This Hollywood film all about work-life balance in modern America and how Kate beats herself up for being a high-flyer is fun to watch. Don’t take it too seriously though, the theme is old hat. The final patriarchal pitch at the end, something on the lines of “trying to be a man is a waste of a woman,” undermines the efforts of the millions of women who need to juggle work and home just to survive. The fact that they do this doesn’t make them less of a woman.

So while you watch Kate Reddy build a snowman at Thanksgiving and cavort in the snow with her kids, enjoy this funny movie for what it is: a chick flick with heart, about a woman who loves her kids and her work with similar passion — Carrie Bradshaw style.