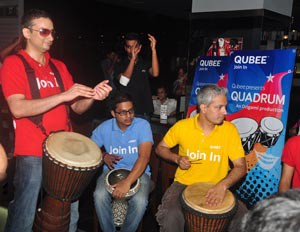 This Lahore-based band is the brainchild of four talented men who live and breathe music. Till a year ago, Quadrum was as unknown to the world as the band members were to each other. TedxLahore, an event devoted to Ideas Worth Spreading, invited Saad Sarfraz Sheikh and Umer Saud to present their ideas about music for 15 minutes. The organisers then introduced them to Atif Saeed and Daud Randle. They soon found that they all shared the same passion for music. So they teamed up and the union was given the name ‘Quadrum’ by Saad Sarfraz.

They are self-taught, self-motivated and self-made, which leads one to ask what inspires them. Saad’s inspiration comes from maestros like Ustad Zakir Hussain, Pandit Ravi Shankar, Ustad Nusrat Fateh Ali Khan and A. R. Rehman. Umer Saud, on the other hand, is inspired by the beats of everyone from Michael Jackson to Guns N’ Roses. “I used to create sounds and beats out of several kitchen utensils and record it on a TDK tape,” Saad recalls. For Atif the pursuit of the fun side of music is his driving force. “There are many bands out there but I don’t see a lot of them having fun,” he says. “I think that is what sets us apart. People come in and see us having fun and they want to be a part of it.” Daud speaks about how he has always been “drawn towards the groove and the melody” in music and does not pay much attention to the lyrics. “For me, it is the feel of a song that gets me going and I guess it makes sense why percussions come to me naturally.” 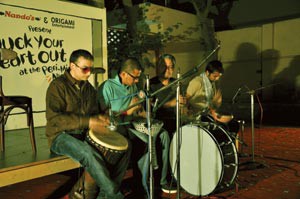 At Quadrum’s recent flashmobs, Atif played the djembe, which gets its name from the phrase, “Anke djÃ©, anke bÃ©” (Everyone, gather together in peace). As the invitation reaches their ears, a crowd mesmerised and curious gathers around the group and claps and cheers. Joined by Umer, Daud and Saad, the four bring world music to Pakistan. The sounds are timeless, cutting across boundaries.

Quadrum listeners see themselves surrendering to the soul-stirring rhythms of the group. But how does Quadrum see itself in the future? “We are setting new trends in Pakistani music,” says Saad Sarfraz. “We expect to collaborate with prominent musicians in the country and in the rest of the world.” Umer Saud would like to have a huge percussion ensemble spread across a stage and do some great international concerts. Apart from that, he wants Quadrum “to do background scores for movies.” Atif sounds both realistic and optimistic when he says, “We are just enjoying the ride while it lasts. However, we also fantasise that it’ll last a long time!” Daud’s wish for Quadrum is to see it “grow musically as a band, focusing on groove and fusion, as we cannot go wrong with that! Things have been set in motion, and we’re going to get there!”

This article originally appeared in the December 2011 issue of Newsline under the headline “Swaying to a Different Beat.”