Back in the ’90s, Rashid Latif made international headlines when he blew the whistle on corruption in international cricket. He announced his retirement in the middle of Pakistan’s 1994-95 tour of Zimbabwe after “noticing fishy happenings” under the captaincy of Salim Malik. Since then, Latif has been crusading against the menace of match-fixing. Newsline interviewed the former Pakistan cricket captain on match-fixing and how the nation’s much-loved sport can still be salvaged. 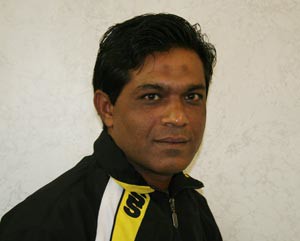 Q: How long has match-fixing has been rampant?

A: I heard about it during my early days especially in the late ’70s, when the then skipper Asif Iqbal was accused of fixing a coin toss. Anyhow, personally I experienced it in the early ’90s on a tour of Zimbabwe.

Q: How big an evil is match-fixing for the sport?

A: It’s a huge problem. The game is being maligned and the trust of the viewers is dented big time. Mind you it’s not in cricket alone; other games such as football, tennis and horse racing are also plagued by this menace.

Q: What are your comments on the match-fixing scandals that broke out in the 1990s?

A: I am sure it was happening earlier as well but I decided to stand up against it and put my career at stake. I still believe that I did not get due support but I have no regrets whatsoever. I feel satisfied to some extent that I brought the issue to light.

Q: Was the issue tackled properly by the ICC at that time?

A: At that time the ICC did not have the anti-corruption mechanism in place, and I did not approach them directly either. I brought it to the knowledge of the Pakistan Cricket Board (PCB) and later presented my viewpoint before the investigation carried out by Malik Qayyum.

Q: Your comments on the Justice Qayyum report?

A: That report was tampered with before its release to protect big names and it could not have been possible without the support of the then government and the PCB. During the probe I suspected a few players and said so. However, stern action was only taken against one of them.

Q: Were you satisfied with the probe carried out by Pakistan into match-fixing allegations?

A: I never was and still am not satisfied with the outcome of the year-long exercise. It was in vain actually. I know for a fact that the judge was convinced too but he was pressurised to tamper with his verdict. I am not making a hollow claim; I can prove that the facts in the report were distorted. The commission was given a year’s time to compile its recommendations, but in September 1999, due to a cut-off date, certain leads were not completely followed up. Even though the government granted an extension till October 30, the commission opted against it and sent the report to the sports minister.

Q: Would things have been much better had the recommendations made by Justice Qayyum been implemented?

A: Since the report was not genuine, its implementation would not have served any purpose. The report itself had listed the leads that were not followed up so that the PCB patron could have pursued them later. The verdict was meant to be reviewed further but it was not done unfortunately. Clause 2 of Part-II of the inquiry report states that everyone is innocent in the eyes of the commission until proven guilty, yet Salim Malik was the only player punished. A number of people appeared before the judge and narrated their versions but no one provided the commission with solid evidence against Malik, so why was he targeted? In order to set the record straight, I believe a fresh probe into the matter should be carried out and everyone should be questioned again.

Q: What are your views on last year’s spot-fixing scandal?

A: I am convinced that it was a trap and the players were guilty and they most certainly knew exactly what they were doing. The outstanding factor is that two parties — Mazhar Majeed and the News of the World — benefitted from it. If the real plan was to expose the corruption in cricket then the undercover reporter should have waited for the one-day matches to be played after the Test series because according to the story published in the British weekly, the actual fixing was to take place in the ODI games between Pakistan and England.

Q: Do you believe that the PCB officials were also responsible for that fiasco?

Q: Do you think ICC’s anti-corruption unit has performed its job properly over the years?

A: Not at all. Since the birth of the ACSU fixing has been on the rise, and the biggest reason for that is the officials of the ACSU lack knowledge of the game. They are professionals in their respective fields but cricket is a different ball game. Only a cricketer can judge wrongdoing in this respect. If a dubious activity takes place, such as back-to-back maiden overs or illogical field placing, only a cricketer can judge and then question the relevant player(s) accordingly.

Q: What measures can be taken to curb or minimise match-fixing and spot-fixing?

A: It’s nearly impossible to keep an eye on every match but for major events such as the World Cup, a cricketer should be designated to watch a match with the referee and he should question the player(s) after a match — if he finds anything irrational. I have witnessed so many matches after the establishment of the ACSU in which suspicious activities have taken place but lack of knowledge in the ranks of the ACSU failed to identify such wrongdoings. I have presented this suggestion before, that a delay in the live telecast of a match would put an end to spot-fixing. Moreover, the law of the game should be reviewed and revised. The introduction of power-plays also increases the likelihood of spot-fixing, hence this rule needs to be changed.

Q: According to Lord Condon, match-fixing was rife in the 1990s.

A: I don’t understand why he took 10 long years to unearth the fact that all the teams, in one way or the other, were involved in fixing. The decade-long silence actually suggests that Mr Condon, along with the ICC officials of the era, turned a blind eye to the menace. He himself admitted that spot-fixing could not be completely curbed but did not share the reason for it, which is that they don’t have the will to do so. Condon stated that the ex-players were shamelessly quiet, which is why I would like to point out to him that I personally met with the ACSU officials in Karachi in 2003 and shared valuable information with them, but my efforts went in vain. Had Mr Condon broken his silence at the right time, cricketers like myself would have been in a better position to expose the culprits.

This interview originally appeared in the December 2011 issue of Newsline as part of a larger story  on corruption in cricket.