What do Karachi’s schoolchildren do when school is out? Are they safe? Do they use their free time wisely? Do they have enough structure in their lives? From soccer classes to music lessons to book clubs, extracurricular activities outside the classroom play a crucial role in developing the personalities of the younger generation. With all the activities available to kids these days, deciding on what you should get them involved with can be a challenge, especially since you are not trying to fill up their schedules, but enrich their young lives. Newsline picks the best options… 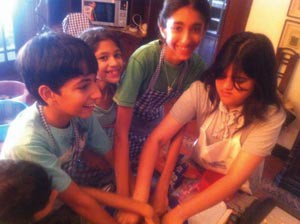 Started by Alizeh Bashir, currently working as an associate at a law firm in Karachi, Kitchen Heroes is a series of weekly cooking classes for three to 11-year-olds. Bashir describes it as “learning through the process of cooking.” The art of cooking involves constructing treats from start to finish, which helps children understand the blends of different flavours, textures, colours and measurements. This is then combined with cutting animals and shapes, to ensure that children have strong motor skills. The idea for these classes stemmed from Bashir’s love for cooking and her affinity with children. “I strongly believe the age bracket I have selected includes the most crucial years of a child’s life,” she affirms. “At this time the children must develop confidence, hone their interpersonal skills, and explore their creativity.”

At Kitchen Heroes the children are able to flourish in an environment free of competition and assessments. Classes are held every Saturday and a different theme is set every month around which the recipes and activities are assigned. Themes covered so far include Italy, where students learned about the country’s geography, culture and language. In addition to cooking pizza, ravioli and cheesecake, they constructed pope hats and staffs, painted stained glass and built mini submarines and gained an understanding of why the latter was invented and what its significance is during wartime. Other themes included outer space where they learned about Virgin Galactic, read alien stories and made banana bread with rocket stencils.

Those enrolled at Bashir’s cooking classes have also gained a deeper understanding of their own culture. Throughout the month of Ramadan, Bashir arranged a number of activities revolving around Pakistan. “We started off the month with a surprise guest who was a potter. All the kids got to mould their own pottery on a potter’s wheel. We learned about the process of making pottery, its usage worldwide and its age-old tradition in Pakistan. We also block-printed our own table napkins with the help of a professional block printer. Moreover, we wove table mats out of straw and made envelopes to collect Eidi.”

Bashir ensures that the children are working in a safe environment by not bringing them near the oven, stove or any machinery and working with child-friendly knives and scissors. From the various themes to the worksheets children take home, each aspect of Kitchen Heroes is carefully planned. You know you’re doing a good job when a three-year-old can tell the difference between a teaspoon and a desert spoon!

Kitchen Heroes is currently catering to children between the ages of three and 12 years. 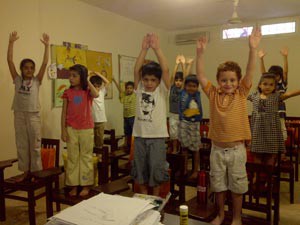 The Three Musketeers instead of opting for a highly condensed film adaptation. However, law student Sania Dalal has recently come up with the perfect response. It’s called Literary Junction and since being launched last April, it has proved overwhelmingly popular with classes filled to capacity.

“It’s difficult for children to develop a love for reading in the technological age,” Dalal explains to Newsline. “On the whole, children are steering away from reading books altogether, while some don’t even read a novel a month for pleasure.” A keen reader from childhood, Dalal wanted to share with her students the books she read as a student of the Lahore American School. While visiting local bookshops she was shocked at the lack of variety in the children’s section. “The shelves were lined with vampire romances and I was unable to find a single copy of the books I hoped to teach.” Consequently, she had to order the novels on her curriculum from abroad.

Classes for Literary Junction are held in Dalal’s basement where two lively classrooms have been set-up with couches, mixed media and books. Each month, children are given a copy of a classic novel and attend creative workshops held twice a week, designed around the book, meant to develop their enthusiasm for reading. Books studied so far include: Francis Hodgon’s Burnett’s A Little Princess and Lynne Reid Bank’s The Indian in the Cupboard. Watching the screen adaptations of literary works and gaining a different perspective is a particular highlight for the children. When studying the Second World War, Dalal treated her students to a viewing of The Boy With Striped Pajamas, which witnesses The Holocaust through the eyes of an eight-year-old.

It’s a special age at which some children will enjoy being read to, some will already be avid readers and a few may need encouragement. By holding spelling bees, playing games and making children learn about different cultures (they even had a Royal Wedding theme), Dalal shows that the Literary Junction is ultimately about having fun with learning.

Literary Junction is currently only catering to third to sixth graders (eight to 11 years) but it has a summer programme that includes children from first and second grade as well. 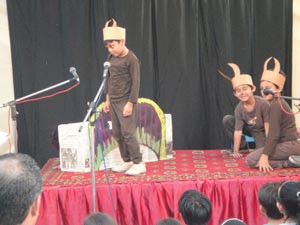 What makes Qayoom’s activities so enjoyable is that each child plays a special part. “I like to make the kids feel like they have ownership as it’s also their class. It’s essential that the children are happy.” When choosing material for the final show she makes sure that it is something that the children will be familiar with: “If they are performing The Three Little Pigs and forget the dialogue it won’t be hard for them to improvise.” She also teaches them about auditioning and allows the rest of the group to decide who was the best .

Qayoom acknowledges that another important benefit gained through acting is the ability to work well within a group.  Through acting, students learn to take direction, lead, support and trust others. In putting on a theatrical performance, participants work with a diverse group of different ages, genders and skill levels. Younger students learn from older students and experienced performers encourage the novices. Through the experience they learn about group dynamics, finding their leadership and supporting roles to each other both on and off stage.  Each one understands that the show does not exist without the entire team.

The run-up to the annual drama is always an exciting time for Qayoom’s group. She writes her own scripts made up of a number of short skits and the children provide suggestions for fillers in between costume changes. These can include poetry reading and singing. The highlight for the children is dressing up and becoming another person. Costumes for the drama are brought in two weeks before the show with parents becoming actively involved and subsequently bonding with their offspring.

In a drama class, a child can be a princess, a dinosaur or a cowboy. The possibilities of improvisation are endless. Further, children learn to ‘think outside the box,’ which is a great skill for success in future endeavours. Drama also helps children to think on their feet and stand out in the crowd. Perhaps, one of the most important skills the informal approach of Manizeh Qayoom’s drama club brings, is the the opportunity to make friends outside their usual circuit. After all, ‘Life is a stage,’ so to speak…

Qayoom’s drama class is currently catering to children between the ages of five to 10. She also has a summer camp for two to eight-year-olds, a 10-day winter camp and a Mother and Toddler Club (18 months to two years).