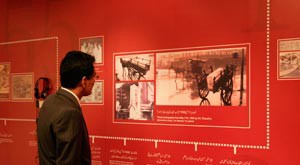 To commemorate the 40th anniversary of the 1971 war that led to the creation of the state of Bangladesh, the Citizens Archive of Pakistan (CAP) and the Vasl Artists’ Collective presented an exhibition that chronicles the shared history of Pakistan and Bangladesh until 1971.

The interactive exhibit, displayed at the Indus Valley School Gallery from November 2-24, consisted of a historical timeline of photographs, oral histories, historical artifacts and even old advertisements from the ‘50s and ‘60s. With the help of this archival material, the exhibit attempted to list significant events from the birth of Pakistan to the creation of Bangladesh.

The timeline began with a photograph depicting refugees from East Punjab arriving in Pakistan in 1947. An oral account by one such refugee, who travelled by train from Amritsar to Lahore, gave visitors an intimate glimpse into the lives of people who left behind all they had to start afresh in the newly formed nation.

The exhibit especially drew attention to the Bengali Language Movement of 1952, in which students and activists congregated at the University of Dhaka to advocate the recognition of the Bengali language as the official language of Pakistan.

However, the timeline contained a few historical inaccuracies. A cartoon depicting Governor-General Ghulam Muhammad as the first president of Pakistan, with the caption “Pakistan will soon be declared a republic,” was placed in the year 1964 when, in fact, Pakistan was declared a republic in 1956, while Ghulam Muhammad left office in 1959. Another newspaper extract, which should have been placed in the year 1948, ended up in 1959, leaving visitors bewildered and confused.

Despite Vasl and CAP’s aim to focus solely on the events relevant to the creation of Bangladesh, a significant part of the exhibit was about Pakistan’s history in general. A fascinating aspect of the exhibit was a compilation of the oral histories of several people who recounted the events of the 1965 war, such as digging up trenches in their backyards to seek shelter from the onslaught of bombs, and getting accustomed to the constant firing and noise.

CAP and Vasl should be lauded for putting together a remarkable exhibit depicting our history. However, one wishes that they had taken a bit more care to avoid some of the historical inaccuracies and the many typographical errors in the text.