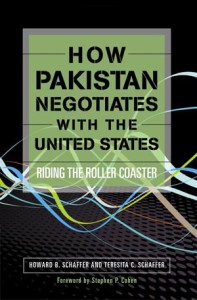 allies in the war on terror, the United States and Pakistan are often in disagreement over what constitutes the proper definition of a terrorist. Usually, unless a terrorist group crosses the threshold by physically threatening a state, one has a comfortable assessment of the group. But the experience of the Mumbai attacks served as a jolt to the United States; immediately after the attacks it conditioned the delivery of aid to Pakistan by asking it to monitor Lashkar-e-Tayyaba, the terrorist outfit that is believed to have carried out the attacks.

More recently, the US and Pakistan were at odds with regards to the Haqqani Network, a group of militants led by Jalaluddin Haqqani, a veteran of the Afghan war. The network is blamed for carrying out attacks on key sites and figures in Afghanistan and therefore draws the US’s ire and has, for some time now, ensconced itself inside Pakistan’s troubled tribal areas. What vexes the US is Pakistan’s reluctance to pursue the network. The United States wants Pakistan to disband the network, but a reluctant Pakistan reasons that multiple fronts cannot be opened in favour of a country that has hardly matched its promises with action (of providing aid). Pakistani officials also lament and allude to past perfidies of the US — which Howard and Teresita Schaffer term as playing the “guilt trip” card — as reason to be distrustful. This is where the US-Pakistan narrative sets in.

Pakistan has been in the US camp not only now but also during the Cold War. Back then, the fledgling state of Pakistan was looking around to build its defence capability against its larger neighbour, India. The US, eager to diminish the Soviet influence, found the pro-US Pakistan an eager partner. While cash flowed in to purchase a common ticket for a ride, the two countries hardly had a smooth journey — and it remains a “roller coaster” ride till today. Both Pakistan and the United States have had different priority settings (and security concerns) and, for Pakistan, it is necessary that the US calculate India in the equation.

But the question is: Who takes the ride on Pakistan’s behalf? Is it the civilians, who speak of having economic relations with its neighbours, or the military, which views all such initiatives with scepticism.

For the two authors, Howard and Teresita Schaffer, such a divide in Pakistan’s polity is visible also in Pakistan’s negotiation with the US. After all, in 2009, when the Kerry-Lugar Bill was signed, the civilian administration was happy to have changed the trend of cash flow from the defence to the civilian sector — only to find that the condition of transfer dented the military. So much has been said about the civil-military divide in Pakistan within the country that an effort is being made to bridge it — at least that is the picture being painted for the international community.

Only a month ago, when the US resorted to criticising Pakistan for supporting the Haqqani group, Pakistan tried to signal uniformity of views between the military and the civilian government in its message to the United States. The state exhausted all modes of communication — private and public — by engaging all concerned players, politicians of all stripes, military and intelligence leadership, and even the media for reflecting the mood: anti-Americanism. A special Corps Commander Conference deconstructed finger-pointing as well as the coded threat sent by the United States; the Prime Minister of Pakistan convened an All Parties Conference (APC) which was attended and briefed by the Chief of Army Staff and the Director General, ISI. Meanwhile, Pakistan engaged with the US at a diplomatic level to cool flaring tempers.

However, notwithstanding the uniformity relayed, Howard and Teresita Schaffer could not only have predicted the details, but also the contradictions in some cases, behind the construction of Pakistan’s public defence of its alleged support to the Haqqani Network. The contradictions are apparent from studying the details of the meetings. As we now know, while on the domestic front the Pakistan government invited the country’s political players to present a united front against the US, the same political players hardly share uniform views on the prescription to the accusations against Pakistan’s softness towards terrorist groups. For one, those parties (Pakistan Peoples Party, for instance), who are in the driving seat, are diametrically opposed to those who are out of parliament (i.e. the Jamaat-e-Islami and Pakistan Tehreek-e-Insaf), and do not have any legal authority to steer the state policy at this moment in time. This paradox explains the confusion on the part of the US who, despite negotiating with key stakeholders, has to face opprobrium on popular media for being irresponsive to the national consensus. Aren’t the leading political parties carrying the consensus?

The analysis of the book is built on the primary experiences of the two authors — one, a former undersecretary on the South Asian desk and the other, a former economic officer in Islamabad. It also draws from their direct access to policy elites in Pakistan — retired civil and military bureaucrats, who are privy to key meetings. Bringing forward all the rich experiences in Pakistan and South Asia, the book presents an outline of Pakistan’s power structure — both formal and informal.

The strength of the book lies in the way it presents Pakistan’s negotiating structure comprising more than mere formal negotiating institutes or players. For the authors, much of the informal power structure is derived from the cultural context of the country. For instance, the book explains how the role of the “social web” and non-authorised power structure is activated when a Pakistani official negotiates with the US. Little wonder then that the US too has often bypassed the civilian government and negotiated directly with the military.

Diplomats posted abroad assess national behaviour on the basis of the cultural milieu of that country — many undergo training about the country where they are to be posted. However, given the flexibility in the same culture or the struggle over what constitutes true culture, the sole reliance on cultural reasoning can be contested on the same grounds. We all know that even in Pakistan, many a retired military official would describe the Taliban’s rigid behaviour through the lens of Pashtun culture and norm — much to the consternation of Pashtun nationalists.

One can critically argue that the activation of informal channels (such as sending a brother or a friend) is a common exercise the world over, especially for negotiations at the international level. Needless to say, negotiating with the player directly secures a favourable outcome, even if its overrides the formal channel. And, as we have seen, much to its benefit, the United States has engaged directly with the military to achieve swift results.

Since the book covers negotiation strategy, it also dwells on the typical thinking pattern in Pakistan, which is termed as a deliberate attempt by Pakistani players to mould it so. The author, for instance, at one point, compares how some officials in Pakistan are prone to view issues though the lens of conspiracy. In direct contrast is the American view, which is more institutional in nature. While a contrast in the thinking may exist, it can be argued that instead of it being a negotiation strategy on the part of Pakistani officials, such thinking reflects the intellectual lethargy on the part of the Pakistani elite. The divergence is so obvious that on the one hand policy makers in the United States, like Schaffers, are prone to borrow from academic work on political science (Howard Schaffer teaches at Georgetown University) while, on the other hand, even the academia in this part of the world uses abstract rhetoric to present its case.

Overall, the book encapsulates all the factors that play into negotiations with Pakistan — the players, the process and the external context. Hence, the book also serves as a summary of Pakistan’s foreign policy. While some would like to view the state-to-state relations purely from a state perspective at the cost of internal power play, what makes the book important is that it reveals all the mechanisms in place. Thus, instead of Pakistan negotiating with the United States, it is the Pakistani military or civilian leadership or a specific politician getting his or her message across to the US. The authors are not arguing whether without the internal dynamics the relation would be any different; what they are analysing is the way different players operate in negotiations.

In Pakistan, the book should serve as a soul-searching exercise for all those who think that they are smart enough to fool the Americans through their narrative that questions America’s past perfidies. As Schaffers would probably tell them, they know the sequence and even the players of the past very well. At least, the “guilt trip” on which Pakistani negotiators try to send the Americans must be given a break.

This article was originally published in the December 2011 issue of Newsline under the headline “Who Calls the Shots.”