By Najam U Din | News & Politics | Published 10 years ago 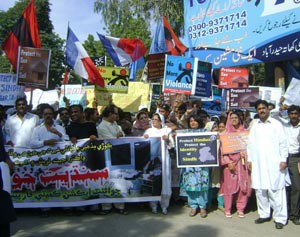 The killing of three men in Chak town of Shikarpur district in a targeted attack on Eid day (November 7) would hardly have created a ripple in Pakistan amid the scale of mindless bloodletting wreaking havoc in the country of late. That it did had more than a bit to do with the fact that the victims were Hindus and were targeted in an area where faith-based violence is relatively rare.

It was initially difficult to sift fact from fiction following the killings, but now one knows that a Muslim girl from the local Bhayo tribe who had befriended a Hindu boy was seen entering an autaq (sitting area for males) near the boy’s house on Diwali (October 26). That upset some members of the Bhayo tribe as well as activists of some proscribed groups in the area.

The Hindu elders had reportedly beaten up the boy and sent the girl back to her family. They also approached the Bhayo elders and sought an amicable solution of the matter. They were assured that the issue would be resolved on the second day of Eid. Meanwhile, the Hindu community in the area started receiving threats of ‘serious consequences’ from anonymous callers. The community sought police protection and a police picket was set up there. But the policemen were not present when the 4pm attack occurred. The three Hindu men killed were not deemed to be involved in the events of October 26.

While no one is immune from the prevailing lawlessness in the country, an individual’s faith extenuates the risks, with non-Muslims exposed to discrimination and considerably more violence. Hindus are the largest religious minority in Pakistan. A look at the security concerns of members of this community can offer an insight into the state of the smaller and less visible minorities on the basis of faith.

Violence against minority communities in Pakistan has grown hand in hand with the spike in intolerance and militant extremism, yet Sindh had largely been free of such violence. Of late, however, there have been several reports of the growing activities of proscribed organisations as well as an increase in the number of madrassas in Sindh, including Shikarpur.

That the perpetrators of the Eid killings lack popular support is evidenced by the fact that the local people in Chak town have volunteered to stand guard at the entrance of the Hindu neighbourhood. Even though the mischief makers may not be in a majority and lack popular support for their agenda of hatred, they are organised and appear confident that they would not be punished.

Since the Shikarpur killings, civil society activists, mainly Muslims, have been out in full force, demanding justice and expressing concern that the perpetrators could escape punishment simply because their victims were non-Muslims. The Human Rights Commission of Pakistan (HRCP) has stated that the recent spike in faith-based violence in the country “has been fuelled in no small part by a sense among the perpetrators that they have virtual immunity for murder for all intents and purposes as long as the victims are from a religious minority community.”

Developments after the killings have not been reassuring. Several policemen were suspended and a senior police officer transferred; a case was lodged by the state and some arrests were made. However, the police officer has been transferred back. The families of the victims have expressed dissatisfaction over the case lodged by the state and filed one on their own. They maintain that those arrested are innocent and suspects identified by them have not been held. Activists of religious organisations besieged the local police station in Chak town to pressurise police following raids to arrest suspects.

Religious minority communities have also expressed concern that the law enforcement personnel tend to support the criminals rather than the victims when their community is targeted.

Meeting soon after Eid, a Working Group of Communities Vulnerable because of Belief established by the HRCP lamented the steady increase in threats to rights of religious minorities.

Participants said that even the majority was not safe from violence and lawlessness, but the situation of religious minorities had deteriorated drastically amid the general decline in law and order. The threats have increased both in terms of scale and geographical area. For instance, Hindus had been living in peace in Balochistan for centuries. But in the last few years there have been increasing reports of Hindu families in the province opting to leave Pakistan to escape target killings and increasing abductions for ransom.

Hindu participants at the HRCP working group meeting said that although the Hindus in Pakistan were not to blame for the 1991 razing of Babri Mosque in India, they were attacked in presumed retaliation and over 200 Hindu temples were targeted in Pakistan. They maintained that like other religious communities, the Hindu population was not accurately counted in the censuses and the number of Hindus in Pakistan was at least three times more than the 2.4 million portrayed by the last official census. They decried forced conversions, discrimination and lack of effective representation.

Reference was made to a comment by the Lahore High Court chief justice stating that the Hindu community in Pakistan was involved in funding terrorism in the country. The judge later stated that he was misinterpreted.

There is little doubt that faith-based violence and violations of rights are on the rise in Pakistan. The region where the killings occurred over Eid has a strong Sufi tradition and a long history of peaceful co-existence. The local Hindu and Muslim populations blame the growth of madrassas and the activities of proscribed militant organisations for fuelling sentiments against minorities.

There is no disagreement on the state’s obligation to protect all its citizens. The religious minorities merit particular protection measures for no reason other than the fact that, in addition to threats that the religious majority faces, they have additional vulnerabilities because of their beliefs. It is disconcerting that such sentiments of vulnerability have remained unaddressed for this long. Allaying this sense of insecurity among members of religious minority communities would be a monumental challenge for governments anywhere in the world, but it is made even more so when the state has its hands full with challenges in the absence of a clear sense of prioritisation. Instead of merely suspending police officials after attacks, the government needs to devise a mechanism to ensure tolerance and integration for all citizens as well as protection for those who are on account of their faith. However, protection measures alone would only have short-term value in the absence of sustainable steps to remove the threats. Kishan Chand Parwani, a member of the National Assembly on seats reserved for religious minorities, says that the Hindus in Pakistan had chosen to stay here in 1947 because it was their homeland, but adds that problems arise when individuals are defined by their religion and not citizenship, being seen as Hindus or Christians first and Pakistanis later. He finds fault with successive governments for not making serious efforts to encourage integration and tolerance.

The political parties also have largely not taken a clear position on faith-based violence, with the opposition parties failing to remind the government of its responsibility to ensure rights and protection for non-Muslims.

The religious minorities must not be left to fend for themselves in the face of brazen attacks and local politicians playing to the gallery with an eye on the next elections. Unless things start changing for the better — and fast — all indicators suggest that the situation for non-Muslims is set to grow worse.

This article originally appeared in the December 2011 issue of Newsline under the headline “Guilty by Association.”