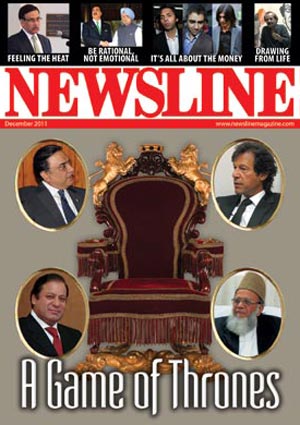 Mr Sharif, it appears, has suffered a change of heart since then, and is going after President Asif Zardari hammer and tongs. He appears to be a man in a tearing hurry. Backtracking on his earlier decision to give the PPP nine days to set up an enquiry commission to investigate the Memogate scandal, the PML-N decided to file a petition in the Supreme Court only two days later, demanding that Justice Chaudhry help investigate a dreadful “conspiracy to demonise, ridicule, malign and consequently demoralise, terrorise, and resultantly destroy the invaluable valiant armed forces of Pakistan.”

The Nawaz League is desperately hoping to see Memogate eventually lead to the president’s doorstep. Unnerved by the rising fortunes of Imran Khan and Shah Mehmood Qureshi, are the Sharifs already beginning to regret the bitterly critical stance they took vis-Ã -vis the army?

Incidentally, the Sharifs are not the only ones baying for Zardari’s blood. Imran Khan, Shah Mehmood Qureshi and Munawwar Hussain are all gunning for the civilian government — and not exactly for any altruistic reasons.

One wishes that they had displayed the same alacrity when dealing with the army’s sins of ommission and commission. How many heads have rolled since the break-up of Pakistan, the Kargil adventure, the GHQ and the Mehran naval base bombings, or Osama’s capture by the Americans? In fact, civilian governments have sprung to the army’s defence each time the khakis have landed themselves in trouble. When the Kargil fiasco unravelled, then prime minister Nawaz Sharif even flew down to Washington to plead with Bill Clinton to extricate Pakistan from the mess.

An intransigent army has continued to call the shots on foreign policy, and any attempts by civilian rulers to change that equation have met with stiff resistance. Remember the army’s rage at the inclusion of pro-democracy clauses in the Kerry-Lugar Bill, or the interior ministry’s attempts to place the ISI under its wings.

The army’s swift response to the entire Memogate issue, irrespective of its veracity or the questions of sovereignty that are being raised, is symptomatic of the institution’s paranoia with any civilian government’s attempts to assert themselves and regain the turf they have lost to the men in khaki.

But if past history is anything to go by, few in the civilian corridors of power will dare challenge them. A leading question that men such as Nawaz Sharif, PTI’s Imran Khan and JI’s Munawwar Hussain, who talk incessantly of how drone attacks constitute a violation of the country’s sovereignty, should be asking the army is, why was the Shamsi airbase given to any foreign country on lease? And if it was, indeed, leased to the UAE’s royal family in 1992 for “hunting expeditions” (!!!), how was it allowed to be converted into an airbase for the Americans to fly out their drone sorties in General Musharraf’s time?

While the army unravels Memogate, it could do with a little more transparency in its own undertakings. Why must we, the people, always be kept in the dark?

Look out for the latest December issue of Newsline at newsstands across Pakistan.