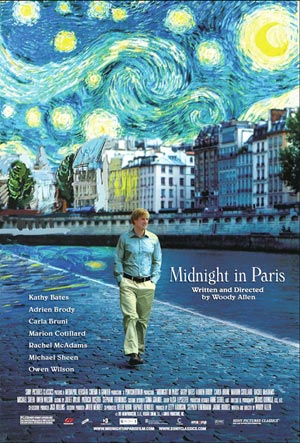 Midnight in Paris, Woody Allen’s latest venture, proves that the veteran filmmaker is still quite capable of crafting offbeat, delightful movies filled with humour and wit. Offering a light, breezy ride through the moonlit streets of Paris, Midnight in Paris is a charming film that is equal parts whimsy and wisdom.

Owen Wilson takes the role usually reserved for Allen himself, even wearing the same khaki trousers and plaid shirts, typical of Allen’s characters and exuding the bewildered wryness reminiscent of Allen’s character in his film Annie Hall (1977). Wilson plays Gil, a disillusioned Hollywood screenwriter, who is visiting Paris trying to finish his first novel. Accompanying him are his egocentric fiancÃ©e, Inez (Rachel McAdams) and her snobbish parents, along with Inez’s pretentious friend Paul (Michael Sheen). Gil has a fondness for the past and he longs to go back in time to Paris in the 1920s, an era he considers the Golden Age.

Gil’s dream comes true when he is transported to 1920s Paris, the exact means of which Allen leaves unexplained. One night, as he is taking a stroll and the clock strikes twelve, he encounters an antique car rattling by and subsequently gets swept away to a party by none other than the famous author F. Scott Fitzgerald (Tom Hiddleston) and his wife, Zelda. Soon, he has VIP access to an ongoing soiree where he is in the company of Gertrude Stein (Kathy Bates) and the authors she dubbed the Lost Generation, including the Fitzgeralds, Ernest Hemingway and Djuna Barnes. Along the way, Gil also meets the famous artist Pablo Picasso and his muse/mistress Adriana (Marion Cotillard).

The time-travelling aspect of the film could have turned ridiculous and childish in the hands of some other director. However, Allen handles it with a sly sense of humour, which makes the experience enjoyable. The balance between the past and present is craftily handled by giving Gil a love interest in the past, in contrast to the present-day McAdams. This love interest is in the form of the aforementioned Adriana, who herself longs for Europe in the late 19th century. The premise that Allen was going for, that everyone is unsatisfied with their present and yearns for another time, unfolds in an interesting way.

The film is at its best when Gil is with his 1920s friends, and his intermittent returns to the present leave the viewer wanting to go back to the past, much like Gil himself. The final confrontation between Gil and Inez is unfulfilling and abrupt. However, in the past, the film moves along quite smoothly. Gil’s conversations with the arrogant Hemingway, the authoritative Gertrude Stein and dissatisfied Adriana are a pleasure to watch.

Wilson’s boyish charm helps make the laid-back, naÃ¯ve Gil quite believable and proves that Wilson is a better actor than his other films would have one believe. Sheen’s pedantic monologues are amusing, as is McAdams’ portrayal of the materialistic, annoying fianceÃ©. In fact, all the actors are comfortable and relaxed in their roles and a commendable effort is made to show the vastly different eras of Paris in their own distinct ways. Midnight in Paris reminds viewers of the glory days of Woody Allen proving that Allen has not yet lost his touch.

This movie review first appeared in the December 2011 issue of Newsline under the headline “Paris: Past and Present.”