The Faiz Art Prize exhibition and award held recently at Karachi’s FrÃ¨re Hall was ample eulogy to Faiz Ahmed Faiz’s wish for an egalitarian society. This event was number 94 in a series of events held in Pakistan and abroad this year to celebrate the 100-year anniversary of the birth of the renowned poet. Faiz was a poet of the people, an outstanding humanist, who provided a message of hope — addressing the root cause of a problem, not just outlining the symptoms. Faiz’s creed was of a revolutionary activist, his poems spoke to the oppressed and the downtrodden, he rejected the literary doctrine of art for art’ s sake and his poems were committed to confronting injustice.

The exhibit was displayed under Sadequain’s impressive final mural in a space designed by renowned architect Habib Fida Ali. The award was conceived as a national one, for artists across the country — also extending to Pakistani artists in the diaspora, and neighbouring India — competing in a category entitled ‘Postcards to Faiz.’ 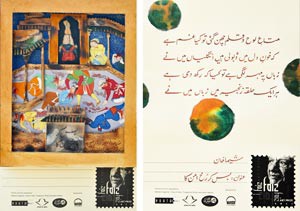 Faiz’s translator and friend Victor G. Kiernan noted in his extensive introduction to his book Poems by Faiz, published in 1971:

“…[Faiz] has had all his life the same fundamental sense that poetry ought to be the servant of the cause, a beacon to ‘poor humanity’s afflicted will’, not a mere display of ornamental skill.”

In similar fashion a majority of the postcards on display conjoined art with the ideals of social justice and love that permeate the verses of the eminent poet. The first prize in the artist’s category was awarded to painter and printmaker Meher Afroze, and the second prize was given to Ruby Chisti, a New York-based artist of Pakistani origin.

In the student category, the first prize was awarded by the jury to Naureen Rashid of the National College of Arts, Lahore, and the second prizes to Uzair Amjad (also of the NCA), Humaira Baloch from the University of Sindh at Jamshoro, and Adnan Mairaj Malik from Karachi University. The popular prize, voted for by visitors to the ‘Postcards to Faiz’ exhibit, was awarded to Sheema Khan in the artist’s category and Zohra Tanveer of Punjab University, in the student’s category. 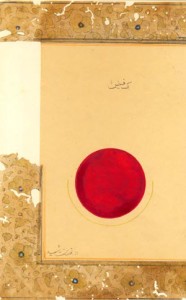 “Aman Ki Asha,” a peace initiative conceived by the Jang Group and the Times of India, which promotes cultural interaction with neighbouring India, the Faiz Art Prize is specifically created for excellence in visual art. The award itself is designed by sculptor Shahid Sajjad, inspired by an original piece of figurative art by renowned international scientist and Renaissance man, Dr Salimuzzaman Siddiqui.

At the award ceremony at the end of the week-long Faiz Art Prize exhibit (October 3- 9, 2011), representatives of patron organisations spoke of the contemporary reality of Pakistan in relation to art and culture. They included host Niilofur Farrukh of NuktaArt magazine, Ghazi Salahuddin representing the Jang Group and “Aman Ki Asha,” Naazish Attaullah, artist and ex-principal of Lahore’s National College of Arts and a member of the Faiz Art Prize jury, and Rahat Saeed, the deputy secretary-general of the Progressive Writer’s Association. Faiz Ahmed Faiz’s daughter, artist and educator Salima Hashmi, and his grandson, Adeel Hashmi, had flown down from Lahore to speak at the event and present the awards.

The speeches by members of the art fraternity had a common theme: the need to build bridges between the artist and the community and to reclaim cultural space by the simple law of statistics, by increasing and extending the patronage of culture. Niilofur Farrukh spoke of the revival of national exhibitions, providing a wider audience access to good art and developing their affinity towards the visual arts. She spoke of the need for a reaffirmed commitment by the public and private sector to remove apathy towards the arts and dispel a fear of culture.

The speakers reiterated Faiz’s creed of social justice and equality, which resounds in the minds and hearts of all those who cherish peace and crave respite from the forces of darkness and extremism that have engulfed the poet’s homeland.

The prize-winning entries were put up for sale via an auction held the same evening, the proceeds of which were to go to the post-2010 flood rehabilitation of the ancient potters of Yarak, a village in the district of Dera Ismail Khan in Khyber Pakhtunkhwa.