Around the time Mohan Das completed his masters in fine arts from the University of Sindh in 2002, Zahra Malkani was an ‘O’ Levels student at the Karachi Grammar School. She went on to study studio art at Bard College in upstate New York while Das was exhibiting his work in various group exhibitions across Pakistan. The subject of Das’s work is the humble rickshaw — an obsession that dates back to his childhood when he painted rickshaws in Hyderabad to earn a few rupees. Meanwhile, Malkani is deeply influenced by both the Internet and her experiences as an outsider in America.

These two artists could not have had more diverse backgrounds and interests. However, at the Canvas gallery exhibition Street Credo curated by Nafisa Rizvi, their collections not only hung side by side but also proved to complement each other.

Barring a couple of large paintings, Das’s entire collection consists of 14Ã—14 inch triangular canvases that mimic the shape of the panel found in the back of most rickshaws. Within these triangular frames, he paints everything from Mona Lisa dressed in Rajasthani apparel to local street children. The seemingly incongruous depiction of the da Vinci masterpiece is a reference to one of the early slogans painted on the imported rickshaws: “Italy ki shahzadi, Sindh kay godh mein.” In another painting, Das depicts a cane lying on an outstretched palm. This monochrome image is derived from childhood memories of lingering on the streets watching rickshaws go by, arrivingt late to school and being punished by the teachers. Das explains, “My art is a history of the rickshaw, a history of the drivers as well as my own personal history.” 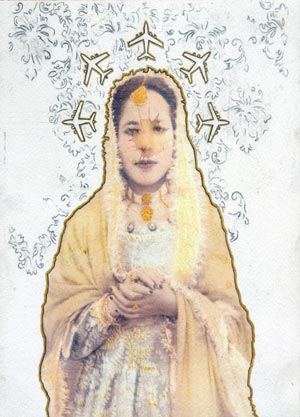 In contrast to the uniformity of shape, scale and medium in Das’s collection, Malkani’s work ranges from coffee-stained drawings to deliberately garish oil paintings. Malkani’s frequent travels between Karachi and New York led her to realise how much importance a document like the passport plays in her life. She therefore incorporates her own passport photographs and small emblems of airplanes in her art. Some of her pencil drawings have an illustrative or decorative quality and look almost like abandoned design templates for banknotes or passport pages. Kalashnikovs and maps of Pakistan also make an appearance, thereby evoking themes of displacement, terrorism, nostalgia and identity. These nuanced drawings are juxtaposed with her oil paintings that borrow their imagery from Pakistani dancing girls’ mujra videos on YouTube. Inspired by these dance videos and male infertility advertisements, Malkani paints bold images on small canvases to mimic the size of a computer screen. And the exaggerated use of colour, thickly laid brushstrokes and, of course, the scantily clad women also evoke Lollywood billboards.

Das and Malkani’s collections are derivative in nature, a pastiche or collage of images and themes from other works. Malkani, for instance, ‘pastes’ images from the Internet while Das depicts personal heroes who range from rickshaw painter Ustaad Latif to Rembrandt. The two artists dismiss distinctions between highbrow and lowbrow, foreign and local, personal and public and this gives their work a witty and postmodern edge.

This article originally appeared in the December 2011 issue of Newsline under the headline “Past and Pastiche.”