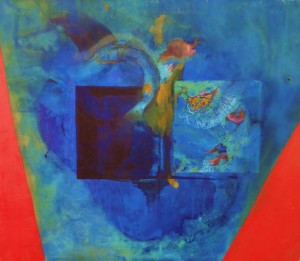 Blue, Orange and In Between, uses a much larger landscape than before. If her former paintings were a manifestation of the mind, these tackle the essence of nature itself: the movements of the earth’s core; boiling, bubbling energy and fire.

Beginning her artistic career with medium-scale abstract paintings in which one can detect traces of plant matter and anatomy, painstakingly layered in oil paint or oil pastel, she moved on to using mixed media, experimenting with unconventional materials such as various types of paper pleated and folded, then stuck to the canvas, or plaster of paris applied, chipped away and over-painted to give a textural effect.

Interested in colour theory, particularly in modern art, Ikram was clear in her mind about using two complementary colours, orange and blue, as the foundation for this exhibition. From this basic palette and simple idea, a burst of energy and emotion has surged. While her early work had a delicate, almost feminine quality, here the artist has let herself loose. In one painting, the largest canvas in the collection, measuring six feet by four, she has allowed the paint to drip over an intense, layered surface. But the artist is very much in control of her medium; the seeming drips create a maelstrom at whose heart appears an ethereal, amorphous form which appears in much of her work. It is life in creation, at the centre of a meeting of contrasts. In another, smaller work, a textural disk floats across a roughened, pleated surface, reminiscent of a planetary surface.

Not all of the work is sculptural. There are some paintings in which the artist goes back to her original genre of oils, although here too the thought process has developed, causing her to juxtapose sharp angles against amorphous forms, so that in one canvas a tilted orange-red rectangle on a blue ground occupies most of the space. Across its surface, roughened with pleats and folds, and dark cloudy shadows, are finely drawn forms that appear to be in dialogue with one other: a robust black shape and an ethereal yellow one. Dominating all the works are orange and blue, but there are divergences, with either colour varying in intensity and shade, from vermilion and cadmium red to navy and turquoise, with flashes of yellow, ochre and charcoal. 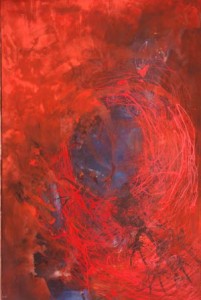 Many of the 16 works in this exhibition, in which expression, colour, thought and composition, the complexity of the universe and the essence of nature and the human subconscious are in complete unity, are truly powerful. Technically, the artist has achieved command over her medium, creating multiple layers of paint which although dense, reveal elements of the layers below.

Considering herself an abstract expressionist, Ikram is a serious painter who wants to carve a path away from the miniature tradition which, she feels, has taken over the art community and become central to its recent development. Inspired by nature, she attempts to revive the act of painting executed on a large scale, which she feels has been undermined by the miniature school. She is also a painter unmoved by trends, preferring to stay close to what she feels and sees, whether it is beautiful or ugly.

This article originally appeared in the December 2011 issue of Newsline under the headline “Big is Beautiful.”