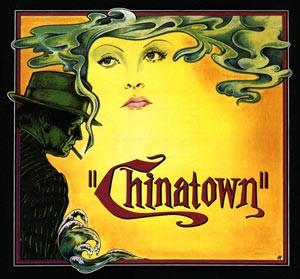 Chinatown (1974) is often hailed as one of the greatest films ever, and since its release very few films have rivalled its complex narrative and dark tone. Directed by Roman Polanski just a few years after the brutal murder of his wife Sharon Tate by Charles Manson, the film boldly exposes the depths of human depravity.

Robert Towne wrote the Oscar-winning screenplay for the film, which is set in Los Angeles in 1937 and follows private investigator Jake Gittes (Jack Nicholson) as he becomes embroiled in a case of corruption and murder. The mysterious Mrs Evelyn Mulwray (Faye Dunaway) hires Gittes to find her missing husband, an engineer for the Water and Power Department, and Gittes subsequently finds himself in the middle of a large-scale water dispute.

The femme fatale and hardboiled detective combination calls to mind classic film noir of the 1940-50s. But instead of recreating a bygone style, Polanski borrows certain tropes from traditional noir only to then subvert their narrative function. Instead of a suave leading man who chooses his words wisely, we get Gittes who cracks off-colour jokes at inappropriate times. And although Gittes frequently stumbles upon crucial evidence, he still manages to misunderstand what lies right before him. Polanski and Towne de-mythologise the classic heroic narrative and Chinatown reveals that sometimes attempts to restore morality and justice are not only useless but can also be catastrophic.

The film has a very controlled colour palette and to emphasise the water shortage in L.A., Polanski employs a visual motif of earthy tones. Polanski also closely aligns the audience with Gittes and our understanding of the plot is dependent on him as he slowly uncovers the truth. The story of Oedipus Rex, with its themes of incest and eyesight, also resonates in Chinatown and although the plots differ, both end on a deeply tragic note. But even if viewers do not notice Polanski’s stylistic techniques or are unfamiliar with the Greek tragedy of Oedipus, the story and acting are strong enough to enthral all audiences.