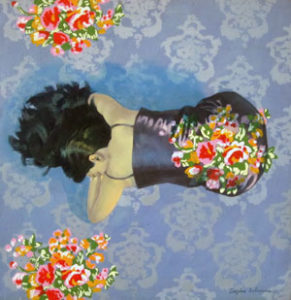 There is a sense of exuberance, a joie de vivre, in Saquiba Suleman’s paintings. Her subjects, always female figures, grow seamlessly out of fields of flowers, or are juxtaposed against geometric shapes: the rectangle of a pillow, a checkerboard grid. Cleverly placing her models against the ordered colour and pattern of graphic design, she celebrates the vibrance of the feminine form. In Suleman’s work the two are intertwined, and the static quality of floral backgrounds acquires fluidity when draped over the contours of a woman’s body. These are compositions of form, colour and beauty. Her paintings are what they are, without undertones and implicit symbols; as expressed by the artist, “My paintings are not philosophical, they are simple.”

At the graduate level, Suleman struggled with herself in her choice of theme for her thesis, ending by showing women as oppressed, blindfolded. It was at her second solo show at Khaas Gallery in Islamabad that she broke away from the oft-repeated tradition of the oppression of women, with two long vertical panels painted in a very different style. In one of these the upper form of a young woman looking upwards is painted on a bright yellow background, her eyes closed against the cascade of flowers that are descending on her clothes and face. This was a sea change, inspired by a shopping trip to Anarkali. Passing a shop selling bedsheets and quilt prints, she was fascinated. She returned to photograph the colourful fabrics, taken by the way the light fell on them when the bolts of cloth were unrolled and displayed for customers. Interested in clothes, drapery and the effect of light, the relationship between the female form, colour and pattern became the focus of her oeuvre.

Initially daunted by the task of drawing the human figure during her university years, she persevered to perfect it. Punjab University, from where she graduated, is known for emphasising the importance of technique and precise, painstaking detail in rendering anatomy. It took her some time to realise how she wanted to apply this skill, common to graduates of her college. Once she found her inspiration, she applied it with full confidence. 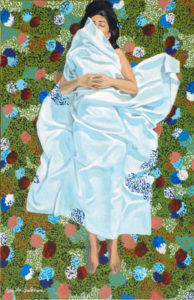 The attention to detail is clearly visible in Saquiba’s solo show at Tanzara. It is visible in the way she renders the mass and movement of hair, the curve of limbs, blocks of light and shade on skin. Facial expression is secondary in her work: she is concerned with the pose, although she may choose to emphasise an individual feature such as the eyes. Her subjects are young, slim, shown lying flat, seen from above, lying on the side, or kneeling. What is dominant is pattern and mood: how the subject relates to the background of the painting, how the flow of the figure merges with the background, being sometimes merged, sometimes separate though related through colour, blending into it without being overwhelmed. In one painting the model lies on a carpet of flowers, loosely draped in a white sheet, over which a few of the background flowers drift: almost like a spring scene in which the subject has immersed herself. In another, she is shown kneeling meditatively, on a bed of gold flowers. In yet another, her subject, viewed directly from above, seems rooted in the pattern around her. And a narrow horizontal panel shows a girl seated on a bed of outsized poppies in colour and silhouette, the flowers overflowing onto the subject’s clothing like the shadows of clouds over a landscape.

A painter at heart, the artist considered using fragments of cloth in her works, but later decided against the idea because she felt that the final work might seem more craft than art. The image of the print comes first, the pose later, shaped by the pattern and what it might inspire. Her work process involves drawing the figure, then arranging and painting the drapery to accommodate and complement it. The figure is painted last, to accent and give it depth. Most of her models are live, although in some cases she takes photographs of them in poses which are hard to maintain, such as those viewed from above, or lying face downwards. She uses a combination of mediums, painting the base in acrylic, and using oil over it. The latter gives the paintings a luminosity which acrylics often lack, despite the availability of mediums which attempt to mimic the effect of oils

There is no doubt about this artist’s sense of composition and colour and her skill in drawing the human figure. Her confident mastery of all these elements is evident in this collection of paintings.