One of my first memories of childhood is of 1974 when my parents put me in school. I have somewhat surreal, often blurry, but nonetheless powerful memories of the year, coping with scores of other kids my age in a dimly lit classroom of a sought-after Kolkata school. I do not remember hurting myself, or a birthday party in the four-five years preceding it. In fact, I do not remember much of what happened in my life before that year.

The year 1974, when India joined the nuclear club, is thus the reference point of childhood. I can vaguely remember hearing my parents discussing India’s nuclear capability. But I never heard them discussing Aruna Shanbaug, the victim of a sexual assault in 1973 that left her in a vegetative state for life after severe brain damage from the attack. No one knows what the reference point is in her consciousness.

It was perhaps because those were not the days of electronic media that Aruna did not get much press. She was not as much written about as she is being written about in papers and reported on TV channels now, following a Mumbai writer’s petition seeking euthanasia for her. A mercy killing petition was unthinkable then. It is unimplementable even now.

That notwithstanding, it has triggered a fierce debate in India after a Supreme Court ruling in March rejected a euthanasia plea for Aruna, but extended the verdict beyond her. In a judgment that is as path-breaking as the 2009 Delhi High Court verdict decriminalising homosexuality, the apex court for the first time favoured passive euthanasia, or the “intentional termination of life by another at the explicit request of the person who wishes to die.”

Aruna may wish to die, but that is neither in her hands nor in those of the petitioner seeking a “peaceful exit from life” for her. Aruna, a nurse, was sexually assaulted in a hospital in Mumbai. The attack was accompanied by unspeakable physical torture — her assailant, a cleaner and staff member of the same hospital who was angry with her, strangled her with a dog chain during the act and then left her to die. She lived, having been “taken care of” by the staff at the King Edwards Memorial hospital where the incident occurred more than 37 years ago to the present, but shunned by her family.

While the rest of us went to school, to college, travelled the far corners of the country or globe, got soaked in the rain, walked in the clouds after our first love, or cried after our first heartbreak, while we grew from adulthood to old age, and became parents and grandparents, this woman remained immobilised in her hospital bed. Her tenders — nurses and doctors at the hospital — have unarguably taken good care of Aruna; they even celebrated when the mercy killing plea was rejected by the court, but is hers a life worth living — or life at all?

The debate over euthanasia is not new in India. It has raged here, as in other countries, for some time now. The Supreme Court verdict only reignited that debate.

Pinky Virani, the petitioner  who wrote a book on the Mumbai nurse and came to know her from those visits, says of the judgement: “Because of Aruna Shanbaug — this tragic woman who has been denied the choice because of  those who profess to ‘love’ her, by touting her bedsore-less ‘life’ [she meant the nurses of the hospital taking care of Aruna] — no Indian hereinafter need suffer the way she does. The Supreme Court has now permitted passive euthanasia.”

The verdict came as a first step in India acknowledging the need for a law on the issue and allowing passive euthanasia in cases based on merit. Till the judgement came, euthanasia of any kind was unlawful in the country, but now, the judges said, their verdict “will continue to be the law until Parliament makes a law on the subject.” Be that as it may, law is a dreaded word in India, with legal amendments often trapped in limbo. The old British laws, many of them archaic and scrapped by the erstwhile rulers in their own country, still govern the Indian legal system. So as we wait for the legal provisions of euthanasia, and pro-euthanasia activists of organisations like the Mumbai-based ‘Society for the Right to Die with Dignity’ speak of the need for a living will to determine the issue, mercy killing will remain frozen between life and death, like Aruna.

Here is a piece of good news to share, sans complacency. The big cat finally growls louder in the forests of India — the tiger population in India has, according to the latest count, risen. 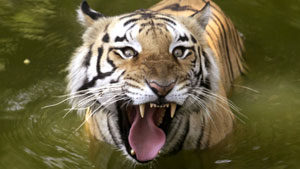 The tiger population of India is now 1,706, registering a rise by 295, according to the census exercise that was carried out in 2010 in the 39 designated tiger reserves of India. In the previous count of 2008, the population of the big cat was a mere 1,411.

In the Sundarbans archipelago in the Bay of Bengal spreading over India and Bangladesh, the tiger count is 70, according to the latest census, busting the 250 plus figures bandied about for long by the West Bengal wildlife department.

India’s pro-active environment minister, Jairam Ramesh had good reason to be happy and share the figures with the media, but he was guarded as well. He called the latest finding a mixed bag and admitted that the tiger is still under imminent threat from the combined might of poachers, illegal wildlife traders, forestland loss and infrastructural shortfall. Tiger experts say despite the increase, India should not be carried away by mere figures and should put money in the right place and through the right mechanisms to ensure this trend continues and numbers of the animals multiply.

Nonetheless, the rise in number has brought a modicum of relief to the wildlife authorities in India after the earlier setbacks of a fast-dwindling tiger population, including the Sariska shock of 2004 when it was found that there was no big cat left in the Sariska Tiger Reserve in Rajasthan. Still, they cannot afford complacence. With man—animal conflict rising every day owing to human encroachment of the forest land, the Indian government has a long way to go before it can bask in its tiger population.

Sushma Swaraj: A Tigress in Parliament

Politicians in India (in fact in the subcontinent) are an assorted lot. Some are debonair, dripping charm and refinement, making a sartorial statement in ethnic chic and speaking the Queen’s language. Some converse in chaste vernacular tongues or Hindi, and are no less expressive and eloquent, enriching their speeches with Urdu couplets in good measure. Some ooze rustic charm and are adored for their originality and candour. But some are downright uncouth. And many are rude and incivil to boot. 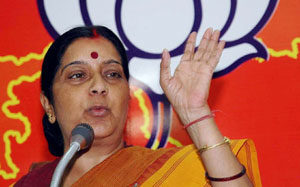 Then, while some politicians are darlings of the media, some do not consider journalists — sometimes admittedly pesky owing to the proliferation of the media — their vote bank at all. So they do not bother to oblige reporters with quotable quotes, or even the 140 characters of a tweet. Some politicians are tech-savvy, some live in the feudal luxury of the black and white era.

But what makes a politician most sought after is his, or her, ability to articulate, inside parliament and outside it. A politician without the gift of oratory does not command too much respect among the social gentry, or the fodder-hungry media, even if they are considered assets in their parties.

If there is one woman politician who now consumes all the media limelight in India, especially during parliament sessions, it is Sushma Swaraj of the Hindu nationalist Bharatiya Janata Party (BJP). She does not have a western ethos, nor does she wear fashionable handloom saris. Her large bindi in the forehead is not a style statement. In her case, the round blob of red — a symbol of the traditional Hindu housewife lording it over her household — seems to signify another form of matriarchy: Swaraj now lords it over parliament.

When Sushma Swaraj speaks — either in English or Hindi — everyone listens with rapt attention. She not only does her homework well, but also infuses her speeches with a kind of conviction. She has a childlike innocence in her diction and sometimes even in her political virulence, making her far more convincing than most astute politicians with the same vocal skills. So when she put Prime Minister Manmohan Singh on the mat over the Cash-for-Vote scandal (it came to haunt the Congress after a WikiLeaks cable said that Manmohan Singh government purchased law-makers to survive a trust vote in parliament in 2008 after the Communists pulled out over the civil-nuclear deal with the US), the PM rose to defend himself with the disarming admission that he is no match for “Sushma-ji” in the war of words.

For a long time the Indian media did not consider Sushma Swaraj a very cerebral leader, perhaps owing to her earlier statements, such as a vow to tonsure her scalp if Italian-born Sonia Gandhi ever became the prime minister of India. She was caricatured for the statement, and Sonia’s decision to rule by proxy saved her mane. But not anymore. Now Swaraj is the new media darling, which owes as much to her fiery speeches in the House, as it does to her tweets, and never mind that in secular India, the BJP is far from the country’s favourite party.