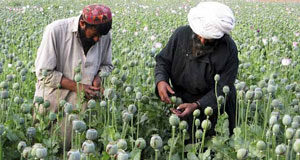 In 2001, Pakistan had become a drug-free and non-producing state when overall poppy cultivation in the country was brought down under the international limit of 1,000 hectares – total national drug cultivation in excess of that global measure would define a country as drug-producing. The landmark status was achieved mainly due to successful poppy eradication campaigns by the Anti-Narcotics Force (ANF), with financial and technical help from the United Nations Office on Drugs and Crime (UNODC) and the US embassy’s Narcotics Affairs Sections.

However, poppy cultivation and the production of opium, the core ingredient of the world’s deadliest narcotics substances, heroin and crystal, have gained momentum since 2005 when militants rose to power and started to challenge the writ of the government in the seven tribal agencies that are part of FATA.

The precise area under poppy cultivation this year isn’t yet known, as the UNODC and the Governor’s FATA Secretariat are waiting for the findings of an aerial survey of the tribal areas and the newly-created Torghar district, which was, until recently, a semi-tribal area known as Kala Dhaka in the Hazara division. Transformation of Kala Dhaka, which was a Provincially Administered Tribal Area (PATA), into the settled Torghar district administered under the country’s laws is being described as an important step for eventually ending the special status of the tribal areas and making them governable. It is likely that the aerial survey will reveal an increase in the acreage with the opium poppy crop, as for many tribal people unable to support their families without any regular source of income in the militancy-hit and under-developed FATA, this is the only recourse to an income.

Khyber and Orakzai, particularly the remote Tirah Valley shared by both the tribal agencies, are known for poppy cultivation. Bajaur and Mohmand tribal regions too have been growing the poppy crop for a long time. While there was a marked decline in poppy cultivation there before the rise of militancy, since 2009, the trend of growing poppy has gained momentum in the Mohmand Agency and in Torghar district, where 55 acres of poppy cultivation was reported by the FATA Secretariat in 2010. Certain other areas of the Khyber Pakhutnkhwa province, including Dir, Swat, Buner and Swabi, were also known for poppy cultivation in the ’80s and early ’90s.

With donor countries worried about the smuggling of opium and its refined product, heroin, and a rise in addiction among citizens, the government of Pakistan used the carrot-and-stick approach to make the farmers in the poppy-growing areas give up their cultivation in return for provision of healthcare, educational facilities, roads and other infrastructure. The practice of luring poppy growers into investing their skills and resources in other forms of livelihoods is still effective in most areas where farmers were provided with seeds of other profitable crops or were offered a range of incentives to give up poppy cultivation. Punitive measures were also put into place in case growers refused to obey the ban on poppy cultivation.

However, the lack of foresight by policy-makers, the non-sustainability of measures taken to lure farmers away from growing poppy and the weak implementation of official strategies have contributed to the resumption of poppy cultivation in certain areas. A case in point is the mountainous Gadoon area in Swabi district where poppy eradication drives by the police in 1984 resulted in the death of farmers protesting the destruction of their standing poppy crops. The provincial government at the time, in consultation with the federal government, promised job quotas for the farmers and set up an industrial estate in Gadoon where entrepreneurs were given special incentives to set up industries, offering jobs to farmers giving up poppy cultivation. However, the incentives were gradually withdrawn under pressure from industrialists in other estates and provinces and the industrial units started closing down. Many industrialists also misused the incentives and operated fly-by-night kind of units to make quick money.

Villagers in Gadoon now claim that some people in the area are returning to growing poppy due to the closure of most of the 450 industrial units set up at the Gadoon Amazai Industrial Estate. In February 2011, the police in Swabi district were mobilised and sent to the Naranji area in Gadoon-Amazai to destroy the poppy crop grown on 70 kanals of land. The cops didn’t face much resistance as only three farmers were arrested for protesting the uprooting of their standing poppy crop.

In most cases, farmers resort to planting poppy saplings as a mark of protest against the government’s failure to fulfil the promises made to them at the time of imposing the ban on poppy cultivation. Besides, poppy cultivation is a sure way of attracting the government’s attention to the problems of people in underdeveloped areas and getting demands accepted in return for voluntarily destroying the poppy crop.

The remoteness of places like the Tirah Valley, which is a non-administered tribal territory due to the absence of any government authority there, allows the population to grow illicit crops, defying the laws of the land without much fear. Tirah borders Afghanistan’s Nangarhar province, a major poppy growing area and also a base for drug laboratories engaged in producing heroin. Recently, much to the anger of the Afghan government, a number of such laboratories were destroyed in an international operation in which Russian agents were involved.

Farmers in Tirah start preparing their hilly fields with tractors or bullocks in late September and early October. “We plough our fields and then sow the poppy seeds while hoping for early rains. The plants take almost a month to sprout due to Tirah’s extremely cold weather,” discloses poppy farmer Gul Badshah. He says he expects to make about Rs 1.5 million from his poppy crop due to the high prices of opium and a better yield. “I have cultivated poppy on five acres of land and am expecting a good produce because the weather conditions this season were suitable for poppy. The opium prices are very high and I hope to earn more money,” he adds.

Opium prices reached record levels last season as a kilogramme of the dry form of the substance earned farmers about Rs 45,000. Farm-fresh opium sold at nearly Rs 34,000 per kilogramme, which was higher than the previous year’s price and had prompted many farmers to bring more land under poppy cultivation.

Another Tirah Valley tribesman, Saeed Khan Afridi, says he has cultivated poppy on more than eight acres spread over inaccessible grazing land in the mountainous tribal belt. He hopes a good produce will help him rebuild his house that was damaged by rockets in a battle between rival militant groups in Tirah. “My poppy crop is expected to be ready for harvest by mid-April. I will use homemade reapers to scratch the poppy pods to collect the juice that then dries into brown-coloured opium,” he says. Explaining the process of collecting opium, Afridi says: “We cut the poppy pods with blades in the afternoon and collect the juice early next morning. Then we spread the fluid on the poppy plant leaves and store them in wooden boxes.”

The absence of development work, lack of basic facilities and non-availability of regular sources of income in the tribal areas are prompting an increasing number of people to defy the ban on growing poppy and also bhang, the raw hashish that grows wildly in the vast mountain stretches of Tirah and other places in FATA. Khan Wali, an out-of-work teacher in Tirah says people were forced to turn to illegal businesses as there were few means of earning a decent livelihood in the inaccessible tribal areas. “It is not just growing opium and hashish that worries me. Our schools have been closed for a long time and there is a great risk that our teenagers will join the ranks of the militants who offer lucrative salaries to jobless young men,” says Wali, lowering his voice in fear of being overheard by the Taliban.