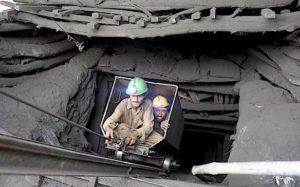 On March 20, 43 miners in Sorrange, near Quetta, were as usual toiling some 6,000 feet underground during their night shift in a coalmine owned by the Pakistan Mineral Development Corporation (PMDC) that had been leased to a private contractor. Suddenly, three successive blasts hit the mine and killed all the men inside. This was the largest death toll in the history of mining in Balochistan.

Just last year, 33 trapped miners in Chile were rescued alive, not just because the country had better safety and rescue arrangements, but also because for the 66 days they were trapped, the international media paid inordinate attention to the tragedy. In Sorrange by contrast, just a few hours after the blasts, everyone had already given up hope of finding survivors.

Yousaf Khan, who had arrived from a neighbouring mine to help out, says, “People make better arrangements for their pets than they do for the lives of miners.”

Miner Gul Zamin corroborates this. Says he, “I had just come out of the mine and was taking a bath after completing my shift. I heard a huge blast that jolted the entire area. We rushed to the entrance of the mine and saw plumes of dust and smoke rising from there. We were unable to enter the mine and save the lives of our colleagues because modern equipment, particularly oxygen masks, were not available.”

A comprehensive rescue operation was only launched at 7am, five hours after the blasts, due to the non-availability of the required equipment. Because of this delay all the miners lost their lives. Other miners did try to do the best they could to save their comrades, but they only had shovels to work with. It took them 48 hours to retrieve the bodies of their friends.

It is generally accepted that the main reason behind the explosions was the accumulation of methane gas. The gas triggered three blasts in different parts of the mine, closing all entry and exit points. Iftikhar Ahmed, the chief inspector of mines, reveals, “We informed the authorities just 12 days earlier that there was too much methane gas in the mine. After that, the authorities should have closed the mine. They did not do so, which resulted in this tragic incident.”

Some labour leaders say it was incumbent on the mines department itself to close the mine until the gas was expelled. Former senator and provincial president of the National Labour Federation Abdul Rahim Mirdad Khel, while addressing a gathering of miners in Sorainj, said, “This incident occurred due to the corruption of both the contractor of the mine and the mines department.”

This particular mine had been shut down in 2008 because of the accumulation of gas. But after safety measures were improved and the wages of miners increased, it was reopened. However, the main condition of reopening the mine — installing a ventilation system — was never fulfilled. Sources say the contractor is an influential mine owner and so his mine was reopened before he met the necessary conditions.

Balochistan is home to the richest coal fields in the country, but unfortunately the miners in the province work under very dangerous conditions. According to rough estimates, there are about 250 mines and 60,000 miners in Balochistan. Boys as young as 13 are employed in the mines. On average, miners work 16 hours a day at low wages and tend to develop pneumoconiosis, a group of lung diseases. Indeed, the International Labour Organisation had pointed out that due to the lack of safety measures the death rate as compared to production per tonnage of coal was higher in Balochistan than other parts of the world.

The president of the Pakistan Central Mines Labour Union says, “Around 100 miners die annually in Balochistan in mine accidents, but so far not a single mine owner has been tried or convicted for deliberate negligence. The absence of strict accountability is the main reason proper safety measures aren’t taken.”