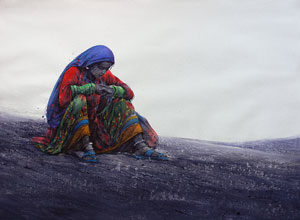 Ali Abbas is drawn towards the simple yet colourful lives of women in interior Sindh and his fascination with the subject was in evidence in each of his paintings at Clifton Art Gallery last month.

While the subject matter is far from unique, Abbas’s women are vibrant, living figures, clearly comfortable in their skin and their environs, no matter how harsh the circumstance of their being. The artist captures their lives with such sensitivity and realism that one is actually drawn right into the images.

How does one depict such empathy with a few strokes of acrylic paint and dabs of watercolour? Abbas says he has been observing the family he has depicted for nearly 10 years and in the process has ceased to be the outsider looking in, becoming, over the years, a virtual member of the clan.

It is this intimacy developed over a decade then that allows the women to be at ease with the artist. It is also perhaps what gives him the ability to go beyond the exterior and pick up on the quirks and subtle characteristics that so humanise his women and bring them alive.

Recently, Abbas was invited to a tribal wedding which he says was full of colour and joy. The artist has captured that mood and those emotions in his paintings, juxtaposing them with the dull monotone of desert life, making for some beautiful imagery. 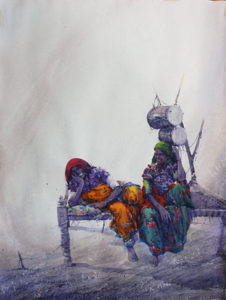 Abbas is also fascinated by the mother and child bond. The women he paints, he says, are almost umbilically connected to their progeny until they are grown and gone, unlike the women in cities who seem to be losing this connect. This relationship finds expression in Abbas’s paintings, as do other bonds: two sisters sharing a joke, or an older woman narrating stories of wisdom to a younger one.

The viewer is pulled into the world Abbas creates; one can almost pick up on the exchanges between the people, feel the roughness of the skin of a woman who has worked many hours in the harsh heat of the desert, sense the languor of a woman resting on her charpoy, and hear the soft, sweet voice of a mother singing to her child or the sound of bangles and the clanging of pots as chores of daily life take place.

Ali Abbas’s work is all about life that is ‘far from the madding crowd’s ignoble strife’ — a visual treat and a welcome interlude in the frenzy of city life.