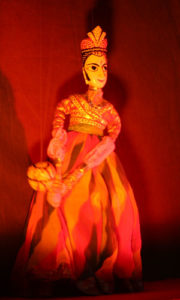 “Sehwai doesn’t like school. He is too involved in his gana bajana,” Khairati Ram Bhat proudly informs me as Sehwai grins sheepishly. “Last night someone gave him 1,000 rupees.”

It’s a sunny afternoon at Peeru’s CafÃ© and the 8th International Folk Puppet Festival is on its last day. As another performance starts in the theatre on this closing day, Khairati Ram, an Indian master puppeteer from Rajasthan, chats with me. Sehwai, the impish fourth grader with an incredibly melodious voice is his grandson. “Once he is 18, I will take him to Anu Malik. There is more money in films,” says Khairati Ram.

This statement is representative of the primary causes for the decline of folk puppetry. At the end of the day, bills need to be paid and practitioners of this craft are compelled to seek alternative solutions to make a living. “Many folk singers started their careers with folk puppeteers. Reshma is one example,” says Faizaan Peerzada, the chief operating officer of the Rafi Peer Theatre Workshop (RPTW) and one of the leading puppeteers in the country.

Every year RPTW celebrates World Puppet Day on March 21 by organising a folk puppet festival with hopes of preserving this traditional art form. This year 10 international puppeteers from Sri Lanka, India and Norway performed at the festival, alongside local folk puppeteers from Sindh, Punjab and the RPTW.

The folk puppet festival started in 1992 and was eventually merged with the World Performing Arts Festival. Unfortunately, due to the troubled situation in the country, the latter festival has not taken place for the last couple of years, so the RPTW has had to focus on at least sustaining the puppet festival.

“Such festivals are incredibly important because they give local folk puppeteers a chance to step out of their downtrodden homes and bleak lives and exhibit their craft to a large audience,” maintains Faizaan. There is a distinct sadness in his voice as he talks about terrorism threats and the general lack of security one faces when conducting such on-ground activities. The primary objective of the festival, he says, is to safeguard and promote the tradition of live performances and to raise awareness about the folk puppet tradition. Most significantly perhaps, the festival attempts to devise means for income generation for local puppeteers.

Certainly, it is a popular event, as evidenced by the large crowds enjoying the performances — from 9am to 9pm — at the venue every day. The fact that there is no entrance fee proves that the festival is open to all to ensure maximum participation, and is line with the RPTW’s strong commitment to engage communities – especially the youth, who, of course, add a fillip to the size of the audiences.

During the festival, over 20 schools were invited to view the performances, and the RPTW offered its own transportation services to schools to arrange visits for children to the Museum of Puppetry. RPTW management ensured that the schools represented diverse socio-economic classes to represent the true philosophy of the organisation. 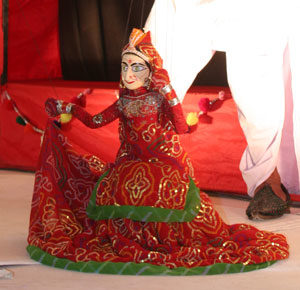 Very much in keeping with this spirit was the Sri Lankan contingent. Rohana Deva, the folk puppeteer from Sri Lanka, has built a name for himself using puppetry as a tool for educating the disabled in Sri Lanka. His organisation, Thidora, specialises in drama therapy for those who are disabled and disadvantaged in any way. “It is a proud moment when I see my students operate puppets. The expression on their faces is priceless,” beams Deva.

However, Deva, like his Pakistani and Indian contemporaries, complains of a lack of government support for puppetry. He suggests that maybe the corporate sector should step forward to provide support to this dying art form.

Discussing puppetry in his home country, Jack Marcussen, the Norwegian puppeteer, says that in Norway the tradition of puppetry is a niche. Other European countries, such as Italy and Spain, he tells us, have a more established tradition, with puppeteers from those regions exploring their folklore. Marcussen, meanwhile, works more with modern puppets. His performance for the festival was inspired from the Arabian tale A Thousand and One Nights and was a combination of object theatre and contemporary puppetry. His performance had to be delayed due to his equipment being stuck at customs, but was finally staged over the weekend.

Despite such travails, Marcussen loves being in Pakistan. When quizzed about his concern for safety he smiles and answers: “I feel incredibly safe in this community. I feel if you are a guest in Pakistan, the people are very hospitable.” His colleague Martha joins in, “I think that the international media creates an inaccurate image of the country. Once you are here it’s very different.” 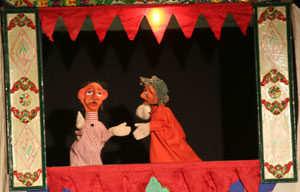 Nonetheless, despite the confidence the Europeans exhibit, the RPTW constantly struggles with terrorist threats. One cannot help noticing the police mobiles on duty throughout the duration of the festival.

While the festival brought Lahoris some cheer against a backdrop of terror and trauma, all too visible was the deterioration in the skills and performances of local puppeteers. In the subcontinent particularly, lore was the staple diet of puppet theatre in the past. Most of this originated from the Mughal period and was traditionally passed from one generation to the next. Over the years, however, this has been lost. Thus, the performances at the festival relied mainly on random characters from these long-forgotten tales without a cohesive narrative.

Also, there was a distinct disconnect between the visual imagery and the accompanying music. To see children being entertained by a puppet dancing to “Munni Badnam Hui,” struck quite a discordant note, as one little girl noted. She came up to the festival organisers after a local performance and asked, “Do you have anything with a story?”

That aside, credit has to be given where due — to the Peerzadas for holding the festival against heavy odds, and to all those who braved the socio-political elements to make their way here from abroad.