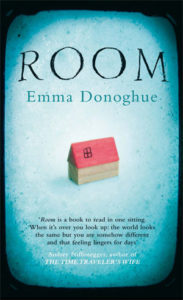 Emma Donoghue’s Room sucks you so deep into another world that after you put it down, your own world seems unhinged. The novel opens up a parallel world — the world of Jack and Ma — that is enchanting, private, untainted and all-encompassing. They play games together such as turning toilet paper into a maze; they watch Dora the explorer on TV (but not too much as Ma warns that TV makes your brain rot); they do Phys Ed (involving running around from Bed to Cupboard); they read books like Dylan the Digger and play word rhymes and riddles. But in Jack’s world, “women aren’t real like Ma is, and girls and boys are not either.”

Subtle hints like why Ma doesn’t go to the doctor for her rotting teeth and her painful wrist, the ‘Sunday Treat’ that they wait for anxiously when they run out of supplies, Ma flicking the lamp on and off before sleep and the game involving getting up close to the skylight and screaming as loud as possible all point to one painful, but inevitable reality: everything out of the room, termed by Jack as “Outer Space,” is, in fact, the rest of the world, and Jack and Ma have been isolated from it. Imprisoned in an 11-by-11 foot dungeon for the past seven years, Ma delivered Jack, and the mark on the rug is a reminder of that day. Their fairytale quickly turns into a tale of survival — “It’s called mind over matter. If we don’t mind, it doesn’t matter,” says his Ma, but she wants, more than anything else, to escape.

Old Nick, kidnapper and rapist, comes from “Outer Space” bringing cold air and supplies and Jack is quickly confined to the wardrobe, where he lies awake counting the times “the bed creaks.” “Today is one of the days when Ma is Gone,” thinks Jack, when his mother succumbs to bouts of depression, leaving Jack to fend for himself.

The macabre story would be all too much for readers if not for the endearing naivetÃ© of the child — who tells the whole story from his five-year-old inquisitive perspective so that you can’t help falling in love with him.

As his Ma starts revealing the truth about the “Outside,” Jack’s reaction is all too predictable — deflection and confusion. He asks his mother if she misses being on the outside and she replies, she misses “all of it,” to which Jack responds, “You actually lived in TV one time?” When Ma describes her initial reaction to being abducted as, “But my head ached all the time, my eyes were scratchy, the smell of the cork tiles make me sick,” Jack asks, “What smell?” To Jack their world is complete and he doesn’t need more. The second half of the book is a whirlwind of discovery, about which too much can’t be said for fear of spoilers.

Author of the bestseller Slammerkin, Emma Donoghue wrote Room taking inspiration from the case of Elisabeth Fritzl, dungeoned by her incestuous, rapist father, Josef Fritzl for 24 years. Similar cases like those of Natascha Kampusch and Sabine Dardenne have been sourced in other reviews, to weave this story of the 19-year-old college-goer who was cruelly abducted and imprisoned in a garden shed. Whilst researching her book, Donoghue recorded her own son’s “kid-English,” to write Jack’s speech and then later edited that to simplify the text for readers.

Short-listed for the Booker Prize this year, Room is about dependency and survival, but above everything else it is about maternal and unconditional love. The book is thematically familiar to the movie Life is Beautiful — where a Jewish man constructs a game of their imprisonment in a Nazi camp for his son. Donoghue, through the novel, highlighted not just cases of victims of domestic abuse, but those imprisoned in different circumstances worldwide — like prisoners in solitary confinement, as Ma points out in the book. The author adds to that: “It struck me as one of those weird situations that can illuminate the human condition: Jack and Ma’s story might turn out to be, in some sense, everybody’s story.”

This book review was originally published in the April 2011 issue of Newsline under the headline “About a Boy.”