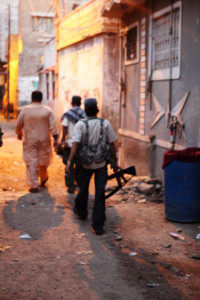 Although President Asif Ali Zardari ordered a ban on the Peoples’ Amn Committee last month in a bid to pacify the Muttahida Qaumi Movement (MQM) and ensure it remains part of the ruling coalition, many leaders and supporters of his Pakistan Peoples’ Party (PPP) remain divided about whether to condemn or condone this shadowy group. Contrary to its name, since its formation, the Amn Committee has engendered anything but peace in the city. In fact, it is widely deemed largely responsible for the soaring crime rate in the commercial and financial hub of Karachi.

It is also recognised that the committee has sidelined the organisational structure of the ruling party in Lyari — long considered the main stronghold of Bhutto loyalists in Karachi — and even occupied its offices.

All that aside, some PPP Sindh stalwarts see the committee as a bulwark against, and a counter-balance to the muscle-power of the MQM. Others question whether supporting and patronising criminals and gun-toting militants makes any sense for the largest political party in the country. “When you bring criminals and guns into the fray, it hurts political forces in the long run,” said a senior PPP Karachi leader, requesting anonymity. “But some of our friends within the party who lack political vision and experience, fail to understand this.”

Until recently, the pro and anti-Amn Committee groups in the party were fairly equally balanced. But when Sindh Home Minister Zulfikar Mirza openly announced his support for the committee and unabashedly participated in its programmes, and several other key PPP leaders also displayed their proclivity for this controversial group, the pro votes tipped the scales.

Senior PPP leaders, including Senator Faisal Raza Abidi, MNA Abdul Qadir Petal and several others, along with Zulfikar Mirza kept politically supporting the committee, despite the reservations of many of their colleagues — especially the PPP’s three elected representatives from Lyari, who faced a tough time because of the committee in their respective constituencies.

While the Amn Committee aggressively articulated the grievances and problems of the people of Lyari, the target of their wrath remained mostly the elected PPP representatives from the area. For months at a stretch, PPP MNA Nabeel Gabol, for example, was not even allowed to visit his constituency. The two PPP Sindh Assembly members — Muhammad Saleem Hingoro and Muhammad Rafiq Engineer — also remained targets of criticism for their alleged “failure to carry out development work and resolve the problems of the people.”

The Amn Committee was formed by one of Lyari’s most notorious criminals, Rehman Dakait in June 2008, purportedly to carry out social and welfare work. Sardar Abdul Rehman Baloch as his admirers like to call him, aspired for a political career. This ambition was, however, cut short when he was killed in a police encounter in August 2009. Following his demise, the stewardship of the committee fell to young Uzair Baloch, Dakait’s relative who is wanted by the police in several cases. Meanwhile, the Peoples’ Amn Committee grew from strength to strength, making a solid base for itself first in Lyari — one of the most backward areas of the city — and then expanding its range of “lawful” and unlawful activities in other parts of the city. By opening small schools, running medical centres, and restoring parks and playgrounds, it earned itself the support of the locals. It also helped lower the crime rate in this locality — at least on the surface. But gradually, as gangsters, disgruntled workers and supporters of the PPP and unemployed youngsters from Lyari all started to assemble under its banner, it began to be seen in many circles as more a criminal enterprise than a welfare body.

Sensing the effectiveness of this group — which kept expressing its loyalty to the PPP even while virtually disallowing the party’s local leadership from operating in the area — some key ruling party leaders encouraged the Amn Committee to expand its network in other neighbourhoods. That brought the committee into direct conflict with the MQM and triggered an extensive bouts of killings, starting from early 2010.

Apart from its turf war with the MQM, Amn Committee members also went all out to expand their economic interests in the city — especially in the main commercial areas and bazaars in the close vicinity of Lyari.

On account of its activities, senior police officials, business leaders and the MQM started accusing them of being the main perpetrators of crime in the city — a charge strongly denied by committee spokesman Zafar Baloch. “The MQM accuses us because they see us as a direct challenge to their monopoly in Karachi,” said Baloch, while claiming that the group remains loyal to the PPP and Bhutto’s political legacy.

That some PPP members subscribe to this contention can be gauged by the fact that even a few hours before Interior Minister Rehman Malik announced President Zardari’s decision of banning the Amn Committee at a joint press conference with MQM leaders in the wee hours of March 17, PPP Sindh leaders were calling the group a “sister organisation.”

On March 16, Taj Haider, a senior PPP leader, explained the difference between an affiliate and a sister organisation, saying that while the Amn Commitee was not formally recognised by the party as an official wing, “all those affiliated with the committee are not criminals. Many of them are PPP supporters and so it is our sister organisation.”

Sister organisation or not, and opposition from within the PPP aside, it was the MQM that compelled Zardari to ban the party, failing which it threatened to quit the ruling coalition. The President concurred and went a step further: when Rehman Malik announced the ban, he also expressed the government’s intention to crack down on criminals without any discrimination, in conjunction with the MQM.

Within hours of the announcement of the ban, the Amn Committee ostensibly decided to voluntarily disband its structure and hand over its offices to the PPP. Following this, most members of the committee were assimilated in the party, but PPP leaders were quick to assert that criminals would be kept at a distance.

The question is, will this promise really materialise? And has the committee really disbanded at all? So far, there isn’t a great deal of room for optimism.

The Amn Committee may have been banned on paper, but its key figures and followers, many wanted in dozens of cases, continue to roam freely. But it is not just the Amn Committee which remains the mother of all troubles in Karachi. There are also a number of other ethnic, political, religious and purely criminal mafias that operate in the city and have their fair share in whipping up trouble. Thus, the racket of extortion, kidnappings, robberies, land grabbing and killings continue unabated in the city.

While the fact that the PPP and the MQM — Sindh’s two main forces — have announced their resolve to fight crime and restore supremacy of the law is very welcome, the real test will be seeing this translated into action on the ground. Both these parties — in fact all political parties — must end the politics of expediency and get rid of criminals in their ranks. For this, they will need the will to make a conscious policy decision, because it is bound to be resisted by vested political and economic interests.

The criminalisation of politics and politicisation of crime have become Karachi’s biggest challenges. Political parties have to empower institutions — from the police to the judiciary — to help eradicate these trends, and they need to get the ball rolling now. Time could prove to be the city’s worst enemy.