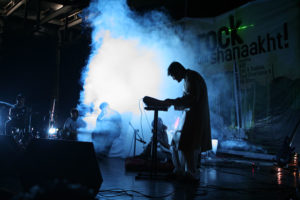 It was probably the simplicity of the entire thing that I found most vexing. The subtle lighting, the startling lack of over-embellished furnishing, the cool indifference of the subject himself. What was I watching? Where was all the bad dancing? The blatantly staged histrionics? And that regulatory dose of morality that music videos today just can’t do without? Where was my hypocrisy-laden, opportunistically placed dose of morality? Where?

Firefly by Usman Riaz, in all its Django Reinhart resurrecting glory, has truly strengthened my faith in the Pakistani music industry and all that it represents. I mean raw, almost art-house direction aside, musically, Firefly, is probably the closest to perfection that I’ve heard in past few months. Each note played steeped in depth, the variations frenetic, the raw energy funnelled through the instrument energising. Everything about the song just works.

Newspapers, presenters and even fellow musicians have heralded Usman for his innate ability and control over his instrument. He has been featured on televisions shows; he has been interviewed by magazines and has found a permanent residence on YouTube. The boy is slowly becoming a household name, and all this at the age of 20.

So who gets the credit? Who has truly made it possible for musicians such as Usman to thrive in an industry that has for many years been dominated by the more marketable, more ‘mainstream’ musicians?

I suppose the blame must be delegated all round.

Coke Studio, former Vital Signs front man Rohail Hyatt’s brainchild, has certainly played its part. Similar to the BBC Radio Live Lounge, Coke Studio has found its element in taking complex, richly woven Sufi tales and epic pieces of poetry and giving them contemporary presentations. The works of Faiz Ahmed Faiz and Bulleh Shah have been transformed into bluesy rock songs, ballads and even hypnotic, almost Radiohead-esque techno grooves. Though considered by some as a blasphemous misuse of often strongly religious material, Coke Studio has given the music industry a much-needed dose of originality. In addition to this, it has given a platform to musicians who would not normally appeal to the masses to truly showcase their talents; a glaring example of which is seen in the case of Arif Lohar. Until Coke Studio came along, this Punjabi folk singer with pipes powerful enough to summon the very Gods he sings about, was relatively unknown among younger audiences. His rendition of ‘Alif Allah’ (with a special appearance by Overload lead singer Misha Shafi) changed this completely. The song became a smash hit, being praised for both the strong vocals and the sheer spirituality of the entire performance.

Uth Records, a venture started by Ufone, has caught on from Coke Studio and is slowly broadcasting its own episodes on YouTube. What sets Uth Records apart, however, is its message. While Coke Studio takes seasoned artists and provides them with a platform, Uth has made it its objective to search out, nurture and promote brilliant young musicians in the country. Aside from Usman Riaz, who was featured on the show recently, Uth has also discovered the Khyber-Pakhtunwala folk duo Yasir and Jawad.

Hailing from an area that would not normally be considered the ideal setting for the edgily melodious spirit-rock that the boys play, Yasir and Jawad too have found inspiration in their roots. Heavily inspired by Pashtun poetry, particularly the works of Ghani Khan, their lyrics (sung in Pashto) are both politically and socially charged. Uth has truly reinvented the process of music production, making it simpler for both the artist and for the listener. Credit must also go to Ufone’s selection of its production team; really, the people who are running the venture are not only extremely talented musicians, but also revolutionaries in their own right. Omran Shafique, lead singer of the groove-rock band Mauj and one half of experimental duo Kostal, Zeeshan Parvez, member of the electronic band Sajid and Zeeshan, and the ever-effusive John Louis ‘Gumby’ Pinto, former Noori drummer, are responsible for taking raw young talent and transforming it into something truly great.

It is very easy to get disenchanted by something that one feels so strongly about. To criticise it becomes natural and cynicism begins to run its course. The Pakistani music industry, for the most part, is heavily dependent on the individuals who make its existence both possible and worthwhile — the artists. Darwin said: “It is not the strongest of the species that survives, nor the most intelligent that survives. It is the one that is the most adaptable to change.” What the industry has benefitted from, more then anything, is a growing realisation among the artists themselves that there was a need for progress, for a sort of rejuvenation. So music is becoming more about spreading a message, about touching people on an emotional level than anything else.

A perfect example of this is seen in the case of bands like Laal and Overload. Named after the traditionally accepted colour of communism, Laal bases its music around social and political injustice. Infamous for releasing a song in response to the deposition of the lawyers (with lyrics based on a poem by Aitzaz Ahsan), Laal has shown that music can now be viewed as an instrument for social change. Similarly, hard rock band Overload has shown its intent, crusading against power cuts, with the very anthemic ‘Bijli Aye Ya Na Aye.’

Ultimately though, this progression comes down to the listeners. We, with our ever-changing tastes and impulsive preferences, enjoy the top position in the hierarchal system of music production. After all, without the listeners, the companies and the artists have no one to cater to. So what exactly is going on with us? Why the sudden vacillation in musical preference? We could blame our colonial cousins across the ocean. Maybe it’s globalisation. Perhaps it’s become fashionable. Or maybe we’ve grown to realise that sometimes change is interesting and that it should be embraced. Whatever the case may be, we finally have cause to be optimistic.