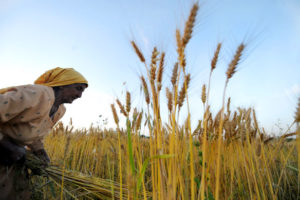 A Pakistani woman harvests crop of wheat on the outskirts of Islamabad on April 13, 2009. The wheat production during the fiscal year 2008-09 has been estimated at 23.3 million tons against the target of 25 million tons, sources said adding that the government intends to import 0.2 million tons of wheat to ensure smooth supply of wheat in all the provinces throughout the year, official media reports said. TOPSHOTS/AFP PHOTO/Farooq NAEEM

KARACHI: Times are changing. In a late night development on March 15, the President signed an ordinance, enforcing new taxes on individuals and companies with fixed incomes. Simultaneously, some of the main agricultural inputs such as fertiliser and tractors were also brought under the tax regime, causing a price hike, and giving farmers something to worry about.

It is a small step in the right direction. The government of the Pakistan Peoples Party (PPP) knows that ground realities have shifted. It is no longer possible for any government to disproportionately burden the corporate sector without facing any resistance. Vocal media and Internet websites like Facebook have given the people a voice. Furthermore, a now increasingly active judiciary has encouraged clean-shaven and smartly attired corporate employees and executives to head for the courts to seek justice. And that is exactly what is happening now. An increasing number of individuals and companies are filing petitions for the reversal of fresh surcharges on income tax.

Usually, the yuppified corporate worker could not have been expected to come out on the streets in protest. But lately, employees at banks and pharmaceutical companies have started circulating emails to each other, floating the idea of a protest at the Karachi Press Club (KPC).

Through the Sales Tax (Amendment) Ordinance 2011, it is estimated, the new taxes will bring an additional 53 billion rupees by the end of the fiscal year in June. New taxation measures include a 15% surcharge on all registered income tax payers.

Additionally, sales tax exemptions have been withdrawn from five industries. This would mean that garments, leather shoes, surgical instruments, bats and footballs and carpets will now cost consumers 17% more. The excise duty has also been increased to 2.5% from 1%, meaning air passengers will be paying more.

Inflation, already in the double digits, will surely increase because of these measures — and consequently so will public ire. But the thorniest issue will undoubtedly remain the urban-rural divide and the lack of will to expand the tax base.

The Overseas Investors Chamber of Commerce and Industry (OICCI), which represents 184 multinational and local corporate giants, has already made it clear to the government that an increase in income tax is unacceptable.

Its president Ameena Saiyid says that the measure could hurt direct foreign investment and the expansion of foreign businesses in Pakistan. “The countries where multinationals have their head offices will also push the government to take back its decision.”

At over 40% the effective corporate tax in Pakistan is the highest among developing countries. A surcharge will add 15% to their existing income tax. And now the managements have to pacify angry employees who will see cuts in their respective incomes.

Saiyid says that other professionals like doctors, who make millions in a month should be brought under the tax net. “OICCI has a very loud voice. The government must realise that foreign investors take our feedback when they want to invest here. What we say matters a lot!”

Agricultural income has largely remained out of the tax net. It is said in defence of this that 95% of the country’s farmers have land holdings of less than 12 acres, which means they barely remain at subsistence level and are thus unable to pay any tax. But industry officials contend that the dynamics of the rural economy have changed in the past five years.

They maintain that the prices of almost all the major commodities, including rice, wheat, sugar, cotton, sugar cane and maize have risen to reflect international rates, which in turn translates into sizable sums of money coming into rural homes over the past few years — a valid reason for taxing the income of at least the big landlords.

Abdullah Yousuf, the former chairman of the Federal Board of Revenue (FBR) says that parliament had always been dominated by politicians who had agricultural interests. “But now political thinking is shifting,” he says, adding, “There is a clear fight between rural and urban based politicians.”

Pakistan’s tax-to-GDP ratio at less than 10% is one of the lowest in the world. With government expenditures rising in the wake of the war against the militants, huge debt payments and ailing public sector enterprises like PIA and WAPDA, raising revenue remains imperative.

However, according to Yousuf, ad-hoc taxation measures have reached their limit. “The economic position has reached a point where we cannot afford to give concessions to one sector at the cost of the other. There has to be an equal distribution of taxes.”

Hundreds of thousands of service-providers like retailers, wholesalers and transporters do not pay income tax. The total contribution of the services sector to GDP is over 50%, but contribution to taxes is just 6%. All of this tax is paid by the financial industry.

In 2009, the government had introduced a similar ‘internally displaced people (IDP) surcharge’ on the income of corporate employees. It led to an unprecedented reaction and more than 1,600 petitions were filed in court against it. The corporate sector won the case in the Sindh High Court, but the government challenged the matter in the Supreme Court. It has been pending since then.

The latest surcharge has been imposed just three months before the announcement of the budget. However, industry officials say there are slim chances of its success. It has been imposed across the board on the salaried class and not just the corporate sector.

A CEO of a leading local firm says that there seems to be no effort on the part of the FBR to tax doctors, lawyers, singers and consultants who charge their customers hefty amounts. He attributes this to the fact that “We don’t have much say with politicians. Unlike the USA and other countries, it is illegal for companies in Pakistan to fund election campaigns to form a pressure group. Corporate entities cannot do something that is illegal.”

Nevertheless, the Muttahida Qaumi Movement (MQM), which drives most of its support from the commercial hub of Karachi, has expressed doubt about supporting the presidential ordinance when it comes to approval of the surcharge in parliament.

Haider Abbas Rizvi, a MQM parliamentarian, says that it is very hard for the party to vote in favour of new taxes. “Agricultural income needs to be taxed. We have suggested other ways to bridge the fiscal gap. The government must control under-invoicing of goods at the ports and rampant smuggling under the Afghan Transit Trade.”

But like the ruling PPP, the main opposition Pakistan Muslim League- Nawaz (PML-N) is also apprehensive about taxing agricultural income. PML-N party spokesman Ahsan Iqbal says that leakages in official expenditure must be plugged instead.

“Why haven’t the officials cut down their travel expenses? Why hasn’t there been petrol rationing in government departments? Who will willingly give tax when there are recurrent power and gas supply cuts? The government needs to fix itself first.” That sentiment would undoubtedly find vociferous support among this country’s beleaguered citizens.