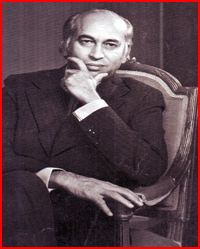 April 4th will always remain a dark day in the history of our beleaguered nation. It was the day when a democratically elected prime minister was hung in the wee hours of the morning at Rawalpindi Jail. When the clemency requests of many heads of states around the globe were rejected. His family members were harassed, and he was given perhaps the most undue treatment while in his jail cell. Never in the history of any nation can one find such a biased execution of justice carried against an elected prime minister. By any stretch of any imagination, a person could not be executed on circumstantial and questionable evidence.

As controversial as Zulfikar Ali Bhutto was, his worst critics agreed on one thing about him, he was a genius. Only a genius of his stature could uplift the spirits of a defeated nation. Only a man with his wit could charm the worst rivals at Simla and negotiate the return of thousands of sons of our soil. It was ZAB who made the “green passport,” once only meant for the privileged class, available to the common man. Only his sheer brilliance could gather the entire Muslim ummah under one platform and bring Pakistan at the forefront of this world.

Zia had underestimated the power of Bhutto. He thought by hanging Bhutto, he could silence the voice of the masses and dissent. By jailing thousands and awarding lashes to many as an exemplary punishment, he was not able to kill the spirit of their revered leader. Come to think of it,  ZAB redefined the meaning of politics in Pakistan. After his rise to the top, it has always been either Bhutto or anti-Bhutto. People who align themselves with Bhutto want this country to be modern, progressive and democratic. The anti-Bhutto clan bands together and finds every way in the world to steer Pakistan away from those ideals. This is the reason why the spirit of Bhutto lives on, even after 32 long years. Because Bhutto is not a name, it is a sensation. Sensations never die: they penetrate and permeate in the souls and live forever.

At this juncture, where the PPP-led government is struggling to maintain its rather loosening grip, invoking Article 186 of the Constitution by the President should not come as a surprise.

After coming to power, the Zardari-led PPP government had been hesitant in reinstating the deposed chief justice. At the same time, the PML-N gained political ground after receiving accolades for its much-touted “Long March,” which led to the midnight executive order of the reinstatement of the superior judiciary. From that point on, there has been a tug of war between the “independent judiciary” and the executive.

The judiciary has often stepped into the legislative and executive arenas in the name of public interest. As such, the tussle between the judiciary and the government is no secret. It seems like the two institutions are often in a game of one-upmanship. High emotions on both sides take centre stage. The elements that really want these institutions pitted against one another truly enjoy this because in the end, in most cases, it’s the “law that prevails.” Law is synonymous with the judiciary.

Giving this adage a new dimension, the PPP’s recent move to introduce a reference in the Supreme Court to supposedly make a historical wrong finally right deserves special attention. Three years into the present government’s term and a good 32 years after the saga of ZAB, the move raises all kinds of eyebrows. Keeping a veil on a more recent murder and the suspects of Benazir Bhutto, the PPP has decided to take a new route.

As widely known, the rightfully termed “judicial murder” of ZAB can only be linked to the whims of an iconic dictator, General Muhammed Zia-ul-Haq. It is not difficult to figure out that the judiciary was subservient to the uniformed President. The verdict was an expected outcome based on the directions of the GHQ. It was the same judiciary that stamped the unconstitutional coup of Zia under the “doctrine of necessity.”

The list of historical wrongs in our nation is much too long. It starts even prior to the day of our independence and it perhaps takes a pause at Shahbaz Bhatti’s brutal murder.  The key word here is “pause.” Sadly it will continue without closure to many gross and abhorrent wrongs.

In the midst of all this, the revival of ZAB ‘s closed, critiqued and buried case will not bring any feathers to the cap of the president or his hawkish law minister. There is the glaring precedent set by Mian Nawaz Sharif’s acquittal after being charged with hijacking a PIA flight carrying General Musharraf. The critics of that acquittal term it as payback by the current “independent judiciary” for the not so “long march” by the PML-N, which enabled the restoration of our independent judiciary.

No matter which way you slice the situation, it pretty much leads to a collision course. A collision course that may not be pleasant for the government. The opponents of the government, some hidden and some visible, are sitting on the sidelines, watching this new seemingly volatile situation unfold. These are people who can hardly wait till 2013. As always, patience is running thin for most of them. The need of the hour is to avoid any new wrongs that may lead us to rather darker avenues.

ZAB’s ultimate mission was not to get a certificate from the “independent judiciary.” His dream was to create a modern, progressive and self-sufficient Pakistan. It is high time that his vision is adopted by his party in letter and spirit.