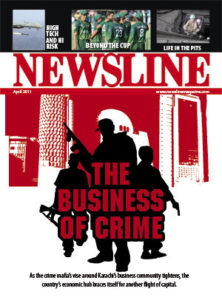 On March 30, Pakistan slipped into a time warp. For that brief moment, as the green and white flag fluttered on roofs across the country, the quiver was felt in the Muslim, Christian, Hindu, Sikh and Parsi hearts of every man, woman and child in the country — and in their diaspora around the globe. And they went, they went to their mosques, to their churches, to their temples and other places of worship, to pray the same prayer. That day neither religion, nor caste, nor creed had anything to do with the business of the state. Cricket had gripped the collective consciousness of a nation, and perhaps as never before, certainly not in recent memory, the nation sang its anthem in one voice. On March 30, the past was not another country.

March 31: “Suicide bomber… 10 killed” — just another headline in just another day of business as usual. Welcome to the real world.

And all this just in the month of March.

Meanwhile, a bemused, benumbed public retreats further into its ivory towers and areas of darkness, ceding space — and by its silence, voice — to the virulently vocal minority that increasingly holds a nation hostage. Today the streets belong only to those who can muster the numbers, and the two largest platforms for public discourse and debate are the pulpit and large swathes of the electronic media. And increasingly, ominously, given the overlapping world views emanating from each, the twain seem to have met.

Ironic then, the hush after the huge crescendo of protest echoed by both in the case of Raymond Davis. Was this because neither national sovereignty nor honour could counter the demand to back down by the religious right’s biggest patron? Certainly, that the deal was sealed, signed and delivered by the Saudi government is not a secret.

Or was it merely that the self-styled custodians of Pakistan‘s morality had been hoist by their own petard: ‘justice’ had been served in consonance with the Shariah laws they so vociferously demand.

The question that arises then: has a precedent been set? Between increasing cases of vigilantism and a growing recourse to Shariah laws for the adjudication of cases, are civil courts becoming redundant? For that matter, has a Rubicon been crossed?

Certainly, events of the past few months have been a watershed in the country’s life. It is time to decide: whose Pakistan is it anyway?

The April 2011 issue of Newsline is available at newsstands and bookstores across Pakistan.