There have been a flurry of meetings between officials from the Pakistani and US armies in recent weeks. And as they have publicly crossed paths they have also publicly traded barbs. Admiral Mike Mullen, chairman of the US military’s Joint Chiefs of Staff, had no problem talking about the relationship the ISI has with the Haqqani network, saying that “these are issues I address with [General Kayani] every single time we engage.” Preserving the long-standing, if uneasy, relationship seems to be the goal of both sides.

It is unclear, however, how recently leaked US documents will affect Pakistan’s current mood towards the US: documents were revealed on April 24 that show that the US military classified the ISI as a terrorist support group in order to detain prisoners in Guantanamo Bay. Things have already been especially rocky recently following a new wave of deadly drone attacks in Pakistan’s north-west and the incredibly controversial Raymond Davis affair. In fact, while Davis’s release in March may have ended one chapter, it does not imply that the CIA-ISI spy war is close to being over. In this article that was originally published in the April 2011 issue, I.A. Rehman writes that the spy work Davis was doing is far from finished, especially as a distrusting US looks over its shoulder at Pakistan while it fights a war in Afghanistan. 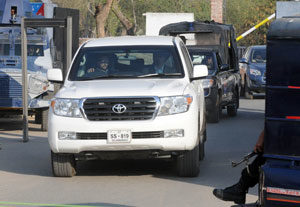 The Raymond Davis affair has apparently come to an end but the mystery surrounding the conflict between the autonomous intelligence agencies of Pakistan and the United States, generally considered close allies in a mortal combat with extremist militants, remains unravelled. This is partly because the case was handled so shabbily by both sides as to expose them as bumbling amateurs.

The opening scene in the highly sensational drama showed all the personnel on the stage in a state of panic. Two young Pakistani men were shot dead by Raymond Davis in a manner that reflected his fear, arrogance and murderous instinct in ample measure. The unidentified man who came to extricate Davis from his predicament took a wrong turn on the busy road the drama had occurred on and ran over a third Pakistani youth. Many found it hard to believe that an American intelligence operative of a fairly high status could have blundered into a nasty crisis in this fashion unless he considered himself an imperial master of the Pakistani rabble.

Panic was also writ large on the actions of Davis’s bereaved hosts. They began by botching up an exercise for fixing the identity of the young men who had been killed with more bullets than required. The local authorities tried to develop an alibi for Davis and deflect guilt by informing the people about two men who insinuated that Davis’s victims were themselves possibly guilty of armed robbery. Almost immediately afterwards the police ignored the FIRs lodged against the three deaths under an incredibly flimsy excuse. Then a brief report in the media dropped a hint that the young men belonged to an intelligence agency. This could have been pure speculation, but the way the track was abandoned only strengthened public suspicion that matters were not as simple as they appeared. Eventually, the victims were presented as two unclassified young men. These images were reinforced by subsequent disclosures to the effect that the guns one of them or both were carrying were unloaded, and the plea of self-defence was not available to Davis.

The US and Pakistani authorities jumped into the fray and chose to confound the public further with a bitter exchange on the question of whether Davis was a diplomat and thus entitled to immunity. While the Americans chose to be consistent, at least in their public statements, stuck to the argument about Davis’s diplomatic status, and went on increasing the price Pakistan would have to pay for non-compliance with their orders, the Pakistanis appeared determined to expose their divided house. Some official spokespersons asserted that Davis enjoyed diplomatic status, while some others maintained to the contrary and claimed to have put their careers at stake. The debate only served to whip up mass frenzy at any possible bartering away of the state’s ‘sovereignty’ and national ‘honour.’ As desired, this strengthened the Pakistani intelligence lords’ bargaining position. High level dignitaries came from the United States and their talks with Pakistani leaders were supposed to focus on Davis’s diplomatic immunity but perhaps they also dealt with differences between the two countries’ intelligence agencies. 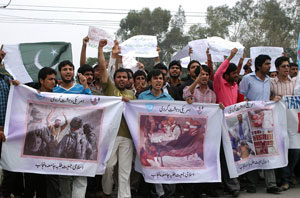 Eventually, the principal parties from the two countries got together to sort out their disagreements, undoubtedly confident of getting their solution accepted by the governments concerned. That paved the path to Raymond Davis’s release from a Lahore prison and homeward flight via Afghanistan.

According to the story now current, the key members of two of the three victims’ families were persuaded to forgive the assassin and accept blood money at rates that made quite a few vendors of human lives jealous of them. Some proud Pakistanis now want to celebrate the ‘surrender’ to Islamic law by the world’s lone superpower, though they have little evidence to prove this — and only they seem blind to the glaring gaps in this assertion. What is nearer the truth is the addition of yet another case to a long list of incidents of abuse of a religious concept.

What happened in the final act of the play is not known, except for the official version. The federal government denies any hand in the deal and so does the Punjab government. The Americans deny paying any blood money but offer no alternative version of the denouement. None of these parties is likely to command respect for truthfulness. Indeed, it may be foolish to look for truth in a cloak-and-dagger plot. The leading and decisive role has been attributed to the hapless judge who was made to arbitrate the matter. Those who are said to have received the blood money cannot be traced, perhaps because their handlers do not wish to disclose their whereabouts. All kinds of stories are doing the rounds about their sojourn in safe houses abroad, a feat reminiscent of the disappearance of a rural family after 26/11. How long will the disappearance — one does not know whether it is voluntary or otherwise — of these unfortunate persons last?

The drama was not without moments of comic relief. For instance, much noise was made about Pakistan’s sovereign status being compromised. The born-yesterday defenders of national sovereignty and national honour obviously have little awareness of their history and their contemporary bondage. It is doubtful if they have even heard of journalist Shahid Rahman’s book that describes the events when Pakistan’s sovereignty was sold away, as well as the pittance charged for the transactions.

There is no doubt that so far the Raymond Davis affair has helped Pakistan’s intelligence executives to get the better of their far more renowned counterparts. There are rumours that the rules of engagement have been revised. However, the basic cause of estrangement between the intelligence apparatuses of Pakistan and the United States is unlikely to be removed by cosmic adjustments.

Raymond Davis was not prowling around in Lahore’s streets for fun or for documenting the decay of its historical monuments. He was obviously trying to gather evidence on the fountainheads of militancy, more specifically about its vaguely identified patrons. That search is unlikely to be given up and for that reason the chapter of the strange spy war cannot be considered closed. At least not so long as the Afghanistan cauldron remains on the boil.