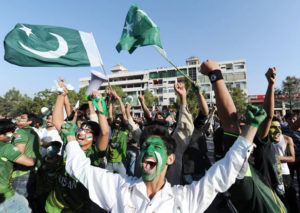 In hindsight, what has the loss in the much-awaited semi-final between Pakistan and India thrown up? Right now, there is one word that comes to mind: maturity!

For all the preceding hype, which crossed the borders of jingoism on many occasions, the morning after dawned as calm, composed and positive. All the talk about war, and “kufr aur Islam ka muqabila” simply vanished into thin air, and even the fact that the team played poorly didn’t dampen sporting spirits.

Maybe the way the crowd in Bangladesh rooted for the Pakistan team on Pakistan Day, even if the visitors’ shade of green dredged up bitter memories, set the ball rolling for this spirit that transcended all previous feelings of jingoistic rivalry, leaving just a very healthy competitive spirit in its wake. The support the Pakistanis found in Sri Lanka, also a country that had very good reason not to view the country too favourably given the attack on their team in Lahore in 2009, was another shot in the arm and demonstrated the maturing of cricketing audiences in this emotionally charged part of the world. And while Mohali did go quiet whenever any of the Pakistanis played a good shot, at least there was no negativity and the atmosphere remained electric throughout. This World Cup was just cricket.

It all started from the pre-match press conference addressed by a born-again Shahid Afridi who proved that he has now grown into the role of a leader of a bunch of very talented men who don the country’s colours, and who serve as goodwill ambassadors wherever they go.

He was oozing confidence and saying all the right things. He spoke about the need to withstand the pressure of the occasion of having over 1.5 billion pairs of eyes focused on the Pakistan team. He deflected all tricky questions adroitly, and the sheepish admission of his unpredictable batting was in itself a sign that he has grown up. But more than that, Afridi led from the front. When the boys entered the field, no one was in doubt about who the captain was. If that isn’t a sign of maturity, what is?

Afridi has, in fact, proved that much more than ability, it is about the right attitude and approach towards the game that delivers the desired result. He played straight and clean, ridding the nation of the bitter after-taste of the match-fixing saga that decimated the team — notwithstanding the ill-timed and insensitive remark by the foot-in-mouth minister, Rehman Malik, that the Pakistan team should refrain from such activities. With friends like that… 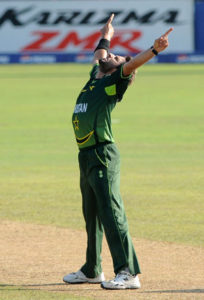 When questioned about Malik’s advice, Afridi was completely appropriate, asserting that he was a cricketer not a politician. The business of politics was left to Manmohan Singh and Yousuf Raza Gilani to navigate at Mohali. But despite the potential this meeting could have for the Indo-Pak equation, the two Prime Ministers could not steal the boys’ thunder. If anyone was winning hearts and minds that day, it was the boys in green. Afridi’s gracious address after defeat clinched that deal.

As for all those subscribers in Pakistan, to the tota, haathee and saamp soothsayers, who were not even willing to entertain the thought that the Indians too would be playing to win, they were simply bowled over by Lala’s apology for the loss.

As for the match itself? Afridi certainly did what he had promised and more. Captain of a team of rank outsiders, who even the experts in his own country didn’t believe in, he said he would get the boys to the semi-finals. And leading from the front, he did just that — in the process, becoming the tournament’s highest wicket-taker.

But perhaps the biggest winner of the event was the Pakistani public. Throngs assembled everywhere, mithai ke dabbey in hand in anticipation, many with guns at the ready to fire in jubilation. When that didn’t happen, they accepted defeat with unexpected grace, despite the overwhelming disappointment following the hype. It was equally heartening to hear young and old, men and women alike, express praise for the men in green. The only thing that was ‘just not cricket’ that day was the attitude of some media anchors who literally tried to put words in the mouth of disappointed cricket fans so as to extract some negative comments from them.

Cricket World Cup 2011 will, in my mind, remain as the coming of age — of cricket, cricketers and cricket fans. May this maturity seep into other segments of our lives.