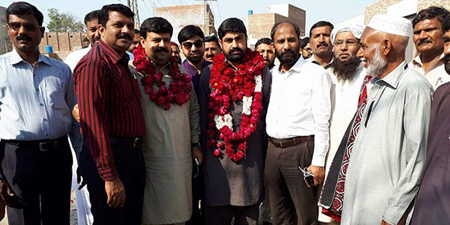 The CJP celebrating the release on bail of Hafiz Husnain Raza.

Amnesty International’s latest report on Pakistan paints a bleak picture of the state of freedom of speech and expression in the country, with the Prevention of Electronic Crimes Act, 2016 being used to intimidate, harass, detain, and sentence human rights defenders and journalists.

And yet, there have been small victories for advocates of an independent press in the country.

Just days after social media activist Samar Abbas — one of the many victims of “enforced disappearances” in the country — contacted his family after over a year, Hafiz Husnain Raza, a Pakistani reporter among over 200 international journalists jailed for their work worldwide, was released from Sahiwal jail.

Raza was arrested by the Punjab Police on April 25, 2016, on charges of “disturbing public peace and tranquillity and instigating people to terrorism under Section 7 of the Anti-Terror Act.”

A correspondent for the Urdu daily Nawa-i-Waqt since 2009, taking his father’s place after his death, Raza was covering the land rights dispute in Okara between the Anjuman Muzareen Punjab, a tenants’ association in the province, and the military.

According to the Committee to Protect Journalists (CPJ), an advocacy group with headquarters in New York, he was a vocal proponent of the rights of the tenants’ group in the press.

“A total of 17 cases under the Anti-Terror Act and Illicit Arms Act were lodged against me,” Raza tells Newsline in a telephone interview. “The Anti-Terrorism Court has acquitted me in eight of them, and I hope that I will be cleared in the rest of the cases as well. I did not expect to be freed… but by God’s grace, I am back home,” he adds.

According to the Awami Workers Party (AWP) spokesperson, Farooq Tariq, for decades tenant farmers in Okara, have shared their harvest with the Pakistan Army. But in 2001, Gen (retd.) Pervez Musharraf introduced a contract system, and the mazareenor small farmers (who own up to 12 acres land) were asked to pay rent in cash. This meant that the military could evict them from the land at a moment’s notice. Consequently, the farmers resisted the move.

Tariq maintains that the 18,000-acre land, comprising 19 villages, is owned by the Punjab government but was forcibly occupied by the military. According to him, the mazareen, however, have occupancy rights guaranteed to them under the Punjab Tenancy Act of 1887.

“Since he (Raza) reported on the issue without any bias, he was picked up and charges filed.”

Fortunately, Raza was supported by his friends, family and peers throughout his detention period. “My organisation left no stone unturned to provide support to my family during my detention,” he says. “Additionally, it backed me more than my expectations, be it on legal or other matters related to my cases… they provided financial support and helped me in meeting with the Inter-Services Public Relations and the Punjab Chief Minister Shahbaz Sharif.”

The CPJ expressed delight over Raza’s release and said it looked forward to the rapid dismissal of all the remaining charges against him. “The fact that Raza had been behind bars for nearly two years should be an embarrassment for Pakistan’s justice system. No journalist should have to go to jail merely for reporting the news,” CPJ’s Asia Programme Coordinator, Steven Butler, told Newsline in an e-mail interview. “His reporting on the land dispute in the Okara area involving the military should be seen as a public service, not a crime.”

Meanwhile Raza says he has no intention of leaving the profession despite the pressures and will resume work soon.

“Neither me nor my father have ever given in to pressure…one should speak the truth no matter what the circumstances…” he asserts. “I will return to Nawa-i-Waqt…no one can stop me from reporting.”