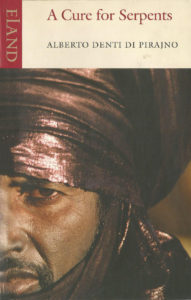 Ancient Libya was inhabited far before written records began. Herodotus wrote about it in his Histories in the 5th century BC. He sourced his information through conversations with the Cyrenes, the Greek settlers in North Africa. How he would love to have spoken with Alberto Denti di Pirajno about this land at the head of Africa and on the southern shores of the Mediterranean Sea.

Alberto Denti was born in Liguria in 1886 and he read medicine in Florence and Rome. His colonial career led him to spend years in Libya and Eritrea. Both territories were to come under Italian colonial rule during his lifetime. He accompanied the Duke of Aosta (a cousin of the King of Italy, Victor Emanuelle III) to Libya as part of a small delegation in 1924. His first base was in Buerat el Hsun (“a coastal station, caught between deserts of sea and sand”) in the Gulf of Sirte, where he opened his dispensary.

Alberto Denti came outfitted with medical knowledge, a rational mindset and an affable spirit. He embraced his experiences with open-minded curiosity and affection. His book A Cure for Serpents is an engaging narrative about his sojourns in North Africa, of which he writes: “When the few survivors meet and talk of those far-off days and of that little world which has vanished, they are perpetually astonished to discover that it was not all a dream.”

There is nothing dream-like in the prose of the book which has an earthy vibrancy. The turmoil of the Arab nationalist movement that characterised the political environment of the inter-war decades in the Middle East, hovers like a mirage in the background. It is the characters Denti encounters as a doctor that define the spirit of humanity inherent in his outlook. His account is free of romanticising notions of the Orient that featured in the European imagination such as in Flaubert’s account of Egypt. Even the rediscovery in the 1930s, of the ancient Roman city of Leptis Magna, which reinforced the Italian colonial connection to Libya, has no mention in the book. Above all, Denti is a pragmatic observer of human behaviour.

As a tabib (doctor), Denti is held in special regard by the people who call upon him for treatment. By way of tribal beliefs they attribute illness to various causes, none of which have anything to do with pathology. There are mythological perceived causes, such as the night bird who kills children; there are evil spirits who occupy the bodies of foxes and jackals and those that sit on the shoulder and afflict young women. Malaria, tuberculosis and venereal diseases are rife as are psychological disorders, especially among women who are cloistered. The local cures are of an apotropaic nature or, horrifying to our modern sensibilities, bordering on the barbaric, such as placing a hot iron on the belly, scarification and blood-letting. Denti treats in the pre-penicillin age and remarks how simple medicines have a rapid effect on people who have no immunity to modern drugs.

Denti’s privileged status permits him entry into zenanas and brothels. Women covered in robes strip for him with surprising lack of inhibition. He recounts his meetings with several women who upturn the stereotypes commonly associated with women in highly segregated societies. The mother of a tribal chief in Dufan teaches him “proper” table manners, namely to eat with only three fingers of the right hand.

He encounters people hailing from various tribes such as the Seraxas, the Sirtic nomads, the Imanghassaten, the Shamba, the Ifugha, to list a few. His chapter on Berber country is particularly fascinating, as is his account of the Tuareg people in southwest Tripolitania. The high self-regard these blue robed people have for themselves is described as “hypertrophy of the ego.”The men always veil and the women never do. The Tuareg — Denti claims — never bathe, and the dirt on their skin combines with the indigo that leaks from their dyed robes to permanently stain their skins blue. The Tuareg woman is free to choose multiple partners and is not “a chattel or an object of conquest.”

His most unusual patient is an orphaned lion cub whom he treats for a fractured leg. She is named Neghesti (Empress) and she stays on in Denti’s house forming a deep attachment to him.

Towards the end of Alberto Denti’s career in North Africa, he is made governor of Tripoli from 1941-1943. The forces of colonial politics, which remain relegated to the background, ultimately loom large as Denti’s final act in North Africa is to hand over control of Tripoli to British forces. He is taken prisoner, but not without the embarrassment of the arresting officers.

The close of the book brings one to the end of a varied journey of a time that has all but vanished, except in the archives of the vintage book.