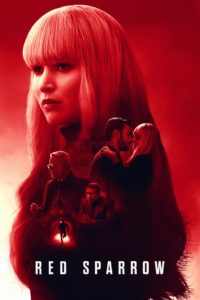 Red Sparrow is a spy movie for the #MeToo era. It is less concerned about the recruitment, training and work of spies than how they literally hand over their bodies to their handlers and — by extension — to the state. It aims to explore the loss of bodily autonomy and the sense of entitlement asserted by men. The only problem with Red Sparrow is that it treats this serious subject matter in a deeply silly way for an exhausting two-and-a half hours.

Starring Jennifer Lawrence and directed by Francis Lawrence (no relation), who had previously worked together on the Hunger Games series, Red Sparrow tells the story of a Russian ballerina, Dominika (Lawrence), who is recruited by the state to use her beauty to entrap men of enemy states. That Lawrence has been reduced to nothing but her physical attributes is made clumsily clear from the start, as she is introduced with a stereotypical Russian oligarch looking down her dress. She is reduced to an object during her training; it is made clear that her body belongs to the state. Even her uncle, played by Matthias Schoenaerts, is a leering pervert who essentially pimped her out as a spy after his own career in intelligence ended following an on-job injury.

To the extent that there is any plot worth the interminable running time of the movie, it concerns whether Dominika will be able to escape the clutches of the Russian state and fend off CIA operative Nate Nash (Joel Egerton). Red Sparrow throws in twist after twist, to the point where it quickly becomes tiring and predictable. Dominika and Nash seem to fall in love, then it seems as if he knows her true identity, then we are told that she knows that he knows about her identity and so on. The suspense of the movie is built by trying to guess if someone is a double agent, triple agent or quadruple agent. But there is only so many times a movie can pull the rug from under you before it just becomes tiresome.

Red Sparrow may be the first acting misstep of Lawrence’s career. An actor known for her pratfalls, she can never pull off the steely poise required of a ballerina. Jeremy Irons shows up as a Russian with a ridiculous low-rent Rasputin accent. The fun to be had in this movie is in its excellently-shot climactic battle scene, the sleaze of Schoenaerts and the lavishness of the costumes. There is a germ of an idea in the movie about sexual politics and its intersection with power, but Red Sparrow suffers from the fatal flaw of being obvious. Its by-the-numbers plot betrays a lack of ambition and is ultimately responsible for the film’s artistic failure.