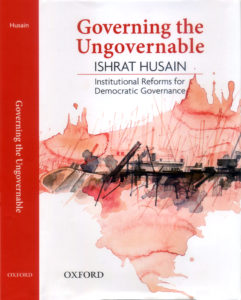 After Independence, Pakistan was off to a flying start, despite all the mega-problems it faced, including the 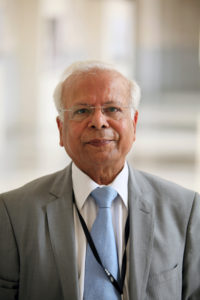 challenge of rehabilitating millions of refugees. In the first four decades of its independence, the country’s economic and social indicators were among those of the top 10 developing countries. But since the early ’90s, Pakistan started to fall behind on both these fronts, even in comparison to its South Asian neighbours.

What factors halted Pakistan’s stint as a top performer? When did the institutional decay set in? Who remains primarily responsible for dragging the country down to its current position as an ungovernable state? Why did Pakistan’s ruling elite fail to build a national consensus on key issues? Where is Pakistan headed in the wake of rampant corruption and a self-defeating system of patronage and nepotism? And lastly, how can Pakistan revive economic progress and ensure the well-being of its citizens?

These are some of the key themes that Dr Ishrat Husain, former dean of IBA and former governor of the State Bank of Pakistan, addresses in his seminal work, Governing the Ungovernable. He weaves the country’s political, social and economic history in his work to underline the challenges, point out the mistakes and suggest a way forward to rebuild civilian institutions and improve governance.

Every one of the 18 chapters is a paper in itself on any single aspect of Pakistan, including its history, economy, polity, society, federal and provincial governments, the civil service, the judiciary, the military and the private sector. The author provides a 360-degree view on each topic — incorporating opposing viewpoints — to provide a complete picture, analysing the past and present through meticulous research. Husain manages to give a fresh perspective on assorted challenges faced by the country.

There are many fallacies about Pakistan’s economy and politics, which dominate media and academia and serve as a propaganda tool against the state itself. In the opening pages Husain busts many misconceptions, including, for example, a “popular hypothesis” that Pakistan’s economy suffered mainly due to terrorism in the post-9/11 period, arguing instead that this decline started in the early 1990s — well before the country got “embroiled in the war against terror.”

He contends that between 2002 and 2008, “which was a period of acute violence and terror activity in Pakistan — including assassination attempts and terrorist attacks on the sitting president and prime minister — the country recorded a remarkable turnaround. The growth rate touched 6 to 7 per cent on average. The investment/GDP ratio peaked at 23 per cent and foreign direct investment (FDI) flows exceeded US$5 billion.”

Taking on another popular ‘myth,’ according to which “generous foreign assistance has been the principal determinant of Pakistan’s economic success or failure,” Husain explains that even during periods of elected governments, the country received more aid from friendly countries, yet failed to boost economic growth or improve social indicators. According to the author, it is governance and not foreign aid that is the greatest determinant of an economic turnaround.

Another ‘misconception’ which Husain contests, pertains to the belief that the US and western countries in general, supported military rulers at the expense of elected governments. The book explains that “the US suspended or curtailed economic and military assistance at crucial times in Pakistan’s history,” when the military was in power. “US aid was suspended soon after the 1965 war with India, the 1971 separation of East Pakistan, and under the Symington Amendment in the early period of Zia-ul-Haq’s rule. Sanctions were imposed when General Pervez Musharraf took over the reins of the government.”

Washington took all these steps when a military strongman was in power. The book underlines America’s role in facilitating Benazir Bhutto’s return to Pakistan, after which Musharraf was eased out of office.

While some analysts attribute “Pakistan’s poor performance to the ‘Garrison State’ syndrome” — that the country diverts its resources to defence, nuclear capability and other security-related expenditure at the cost of education, health and human development – the author argues, “the ratio of defence expenditure to GDP was consistently high in the first 40 years (when Pakistan was among the top performers) and is now 2.9 per cent of the GDP, almost one-half of what it was in the ’80s.” He reveals that “In FY 2016, the budgetary allocation for education was 2.7 per cent. Combining health and education, the budgetary allocation is 3.7 per cent, higher than that of defence and internal security.”

As regards the corporate interests of the armed forces, the author maintains that proceeds from business enterprises operated by their foundations and trusts are used for the welfare of pensioners, particularly soldiers who retire at an early age.

While giving credit to the military for providing better governance than elected representatives, the author is quick to add that “the actions of those who usurped power by removing elected governments and retarded democratic continuity cannot be condoned.”

However, the biggest blow to Pakistan’s march forward, according to the author, came in the ’70s, under the premiership of the charismatic Zulfikar Ali Bhutto, who stifled the private sector through a nationalisation drive. Over the years, nationalised institutions opened the doors of corruption as they became a drain on the national exchequer.

The author holds Bhutto responsible for systematically destroying institutions, particularly the civil service. “[Bhutto’s] disdain for the civil service’s CSP cadre was reflected in the summary dismissal of 1,300 officers soon after he assumed power as Martial Law Administrator…. The seeds of recourse to extra-constitutional measures were sown during this period.”

Interestingly, when General Zia came to power, he did not try to undo what Bhutto did to the institutions or go for a complete reversal on the economic front. The book quotes Mahbub-ul Haq — finance minister in the Zia-era: “We have not been able to deregulate the economy… despite seven years of trying, because the politicians and officials like the system Bhutto put in place.”

Perhaps the biggest disappointment for the ardent supporters of democracy came in the ’90s, during the tenures of Benazir Bhutto and Nawaz Sharif, who “used the institutions of governance and civil servants to dispense favours and patronage, engaging in a dubious game of co-option or coercion of their opponents and excessive misuse of the discretionary powers of the office.”

The author points out that as the role of the bureaucrats was curtailed, important decision-making went into the hands of politicians who were not qualified for the job. However, Sharif did manage to make some important decisions on the economic front, that included pushing the privatisation programme and deregulation of the economy.

With the October 1999 coup of President Pervez Musharraf, the reform process was launched with a fresh vigour. On the one hand, restructuring and reforms in some key public sector institutions were carried out, the privatisation process was resumed and regulatory bodies were empowered; on the other hand, powers were devolved to the grassroots level in the form of empowered local governments. However, the author maintains that “the abolition of the offices of the deputy commissioner and assistant commissioners and their substitution by the elected nazims…was a step too much in advance of its time.”

For the first time in Pakistan’s history, one elected government completed its five-year term and the second is about to do the same, but as in the decade of the 1990s, this period too remained marred by political instability and economic and administrative mismanagement, amidst allegations of massive corruption.

Husain advocates reforms in every sector to boost economic growth and improve social indicators and calls for democratic practices to be observed in the running of political parties. He emphasises a merit-based recruitment system, the devolution of power and a need for consistency in policymaking. “The growing demand for good governance and its shrinking supply,” is identified as the principal reason for the overall deterioration in the economy.

The author proposes slashing down the number of federal ministries from 27 to 18 and the number of divisions from 35 to 23. But while disbanding or merging old ministries, he wants the creation of new ministries for energy, technological development, social protection and infrastructure development.

The book is a crucial addition to the canon on Pakistan’s economy, politics and governance. It is a highly recommended read for our politicians — if they are serious in restoring Pakistan’s image as a top performer in economic and social development.