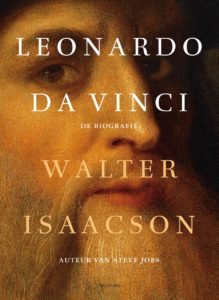 Walter Isaacson is a biographer par excellence. Having covered the lives of giants such as Albert Einstein, Benjamin Franklin, Henry Kissinger and Steve Jobs, he has now chosen Leonardo Da Vinci as the subject of his latest biography. One can see a pattern emerge in his impressive body of work; he focuses on the lives of polymaths at the ‘intersection of arts and sciences,’ and includes their many faults and failures in a bid to humanise them for the readers.

The effortlessness with which Isaacson enables the reader to enter the lives of these extraordinary men as well as making them relatable, is what make his books so readable.

His most recent work, Leonardo Da Vinci, aims at demystifying him. We are shown a new dimension of the great polymath: his years of struggle as an artist seeking commissions from wealthy patrons , living ever so  close to poverty. The book is arranged in sections, according to the cities he lived and worked in: Milan, Florence and Rome, with a brief sojourn in France.

Leonardo started life in compromised circumstances, as the illegitimate son of Piero Da Vinci, a respected notary in Florence. This deprived him of a claim to his family’s name, as well as a share in the family inheritance. Further, he was not allowed to enter the “respectable occupation” of a notary, since the notary guilds then forbade the inclusion of members born out of wedlock. Not that the young Leonardo was interested, he was more inclined towards drawing and sculpting. Eventually, he apprenticed with Verrocchio — a famous artist and engineer in his own right.

In no time, the astute student started to excel in the field as he honed his skills which included, but were not limited to, drapery (intricate lifelike folds in garments), chiaroscuro (treatment of light and shadows in paintings and drawings) and sfumato (softened outline and hazy forms). These gave his painted subjects an animated, lifelike feel which other artists struggled to mimic.

Walter Isaacson has gone to great lengths to present an in-depth analysis of Leonardo’s art with numerous pictures and illustrations of his vast portfolio, which only accentuate the beauty of a meticulously designed book. His most famous works – ‘Mona Lisa,’ ‘The Last Supper,’ ‘The Vitruvian Man’ and ‘The Annunciation Of Christ’  – are superbly narrated as are the lesser known works, which also included many unfinished projects (he was notorious for abandoning many projects). However, the passages that detail his artistic techniques, are laden with jargon, and may be a bit overwhelming for the lay reader.

History rarely rewards geniuses in their lifetime, and Leonardo was no exception. At the peak of his youth, we find him leading a nomadic life – moving from patron to patron in different cities, working from commission to commission. His work would not find even a smidgen of the fame or fortune that is attributed to him today. A painting by him titled ‘Salvator Mundi,’ fetched a jaw-dropping $450.3 million in November 2017. It was bought by a  little known Saudi Prince, Bader Bin Abdullah.

What moved Leonardo was his insatiable hunger to better understand the world around him. He took copious amounts of notes in the many notebooks which he fastened onto a sash he wore around his waist. Nothing was too trivial for him. There are passages in his notebooks that detail the tongue of a woodpecker. While he may have been renowned as a painter, we are beholden to the polymath with his fingers in different projects. Leonardo designed canals, studied human and animal anatomy, designed theatre props, canons and other military technology, drew prototypes of flying machines and submersibles.

The last section of the biography is reserved for his magnum opus, the ‘Mona Lisa,’ and rightfully so. He completed it near the end of his career (although he had started work on it years earlier). It was a fitting culmination to a career that spanned four decades. Through his strokes of genius, a simple portrait of a silk merchant’s young wife would come to be one of the most famous works of art. All the knowledge and technique he had honed over the years was distilled in the painting:

“The Mona Lisa is the work of a man who had used those skills (of observation) to immerse himself in a lifetime of intellectual passions. The inquiries chronicled on his thousands of notebook pages — of light rays striking curved objects, dissections of human faces, geometrical volumes being transformed into new shapes, flows of turbulent water, the analogies between the earth and human bodies — had helped him fathom the subtleties of depicting motion and emotion.”

Just like his earlier works, mathematics would play an equal part with aesthetics in creating this masterpiece.

Writing biographies comes naturally to Walter Isaacson, since all of the subjects in his biographies were individuals who thrived on the intersection of the arts and the sciences, blurring the boundaries between diverse disciplines and creating magic in the process. The core strength of the book lies in how he weaves a story from the multiple strands of Da Vinci’s life, the age of Renaissance Italy and the minutiae of his impressive diversity of skills.

Leonardo Da Vinciis a good primer on one of the most famous and also, one of the most misunderstood geniuses in history. The book is equally illuminating for the art aficionado and the lay reader alike.