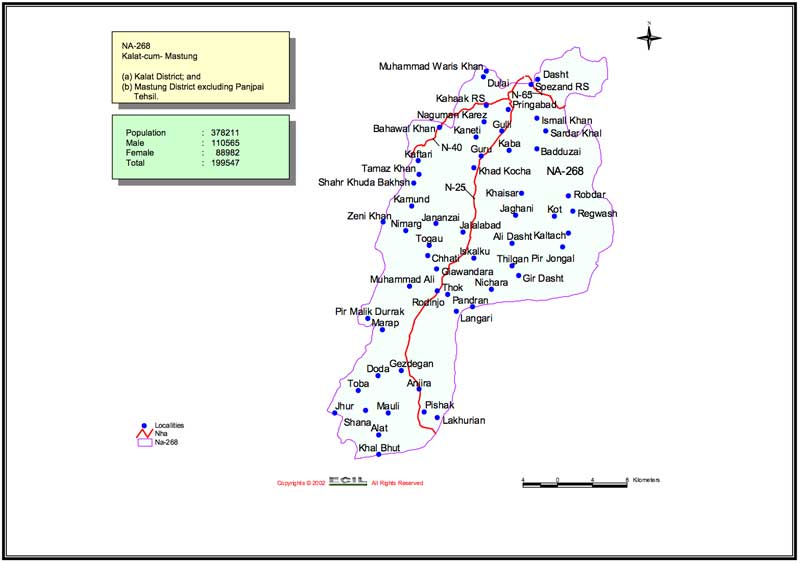 As per the constitution of Pakistan, fresh delimitations have to be carried out once a census is conducted. The last time delimitations were carried out was in 2002, after then president, Pervez Musharraf, increased the seats of all assemblies through the infamous Legal Framework Order (LFO) which was ratified by the Parliament through the 17th Amendment.

The delimitation of NA-268 is the centre of criticism in the delimitation debate in Balochistan. Its total area is 63,063 square kilometres — larger than Azad Jammu and Kashmir, FATA and Islamabad combined. This constituency is almost equal in size to the Khyber Pakhtunkhwa province. NA-268 stretches from Taftan, near the Pakistan-Iran border, to Surab, which lies 215 kilometres south-east of Quetta. The distance between Taftan and Surab is over 800 kilometres, making the constituency impossible to cover in an election campaign.

National Party leader, Dr Ishaque Baloch, strongly opposes the preliminary delimitation of constituencies in Balochistan, describing it as unfair and in need of revision. He particularly criticised the formation of NA-268 and termed it impossible to cover during an election campaign. “We [the National Party] have built a case against  constituency delimitations in Balochistan and will submit it to ECP,” he said.

April 3 is the deadline issued by the ECP for political parties and individuals to submit complaints against delimitations. The National Party is not the only party which opposes constituency delimitations. Ali Madad Jattak, President of the Balochistan chapter of the Pakistan People’s Party (PPP), said that his party is not happy with the way constituencies have been delimited in Balochistan. “We [the PPP] will also submit a detailed case against the current constituency delimitation with the ECP,” he said.

Opposition leader, Abdul Rahim Ziaratwal, argued on the floor of the Balochistan Assembly that the ECP seems to have carried out the new delimitations without consulting maps of the province.

There is also widespread criticism in regards to constituency delimitations for the Balochistan Assembly. The population of Balochistan increased from 6.5 million in 1998 to 12.3 million in 2017. Despite this, the number of seats in the provincial assembly is 51. Due to variations in population growth rates, the population of some districts has increased more than others. This has altered the number of seats previously allocated to districts. While districts like Kharan and Ziarat previously consisted of only one constituency each, in the new delimitations the two districts have been merged with other districts to make one constituency.

Shahzada Zulfiqar, a senior analyst based in Quetta, is also critical of constituency delimitations in the province. He told Newsline that these have been carried out in complete disregard of ground realities in Balochistan and historic links between districts. Zulfiqar added that the ECP must revisit the controversial constituencies in order to ensure that the arrangement is acceptable to all political parties in the province.

Agha Hassan Baloch, spokesperson of the Balochistan National Party (BNP), however, is not as critical of the delimitation, which he describes as “largely fair, with some minor exceptions.” He appreciates that the ECP increased Quetta’s National Assembly seats from one to three.

An analysis of constituency delimitations in Balochistan shows that rules under which constituencies are created (requiring a score ranging from 0.5 to 1.49) are unrealistic. This rule has paved the way for questionable delimitations, such as that of NA-268, and needs to be revised to ensure that equal and just constituencies are formed for the forthcoming general elections. Moreover, the ECP must also take into account the geographical connectivity between districts before merging them together.

Moreover, there is no justification for the number of seats in the Balochistan Assembly remaining the same when the population of the province has doubled since the last census. It would be prudent to increase the seats in proportion to the population.

Likewise, Balochistan should be given the same concessions as FATA while forming constituencies. (In FATA, one National Assembly seat is made up of 416,380 people as compared to the national average of around 780,000). This will result in an increase in the number of seats for Balochistan in the National Assembly.

If the controversial constituency delimitations are not revised, then it will make the election process an unjust exercise in Balochistan — something the conflict-ridden province can ill afford at this stage.