By Rahimullah Yusufzai | Published 4 years ago 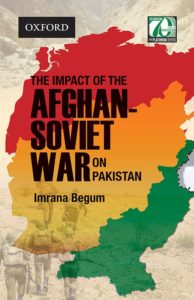 Some of those challenges and suffering continue to this day. As the author writes in the Preface, “If we remain oblivious of our past, we become uncertain about our future.” She goes on to say that the political decisions taken in the 1980s have continued to negatively  impact Pakistan and hopes the book would be helpful in future policymaking by learning from our past mistakes.

Pakistan’s role in the Afghan-Soviet war (December 25, 1979 – February 15, 1989) hasn’t been sufficiently explored or acknowledged. Most writings on the subject have highlighted the negative aspects of Pakistan’s role and largely ignored its positive contribution. The suffering the war inflicted on the people of Pakistan as a result of this war in our neighbourhood went mostly unnoticed as the focus was always on the Soviet invasion of Afghanistan and its global implications. The Afghan mujahideen were glorified as they were fighting a war that eventually weakened the Soviet Union and led to its collapse and which, in the process, benefited the US and its Western allies.

The author, Dr Imrana Begum, is assistant professor at the Department of Humanities, NED University of Engineering & Technology in Karachi and has been focusing on Pakistan Studies. Since there is no mention of it, we don’t know if the author visited Afghanistan or interacted personally with those involved in one way or the other in the Afghan war, be they Afghans, Pakistanis or others. The book would also have been more interesting had Dr Imrana interacted with past Pakistani policymakers, who made vital decisions and got Pakistan deeply involved in the Afghan conflict or with the Afghan mujahideen and refugees — up to three to five million of whom once lived in Pakistan — with 2.7 million still living in our country nearly 40 years later.

At times the narrative feels one-sided as the alternate view about important events hasn’t been sufficiently explored or highlighted although Dr Imrana Begum obviously undertook painstaking research on a host of related topics. However, a little effort in the interest of objectivity would have added value to a book written on a very important subject.

Also, there are some debatable points: The author states that madrassahs in Afghanistan and Pakistan prospered due to foreign funding from conservative Arab regimes. While it is true that Arab governments, through their charity organisations and private individuals, made donations to the madrassahs, the actual amount donated has been a point of dispute. For example, a recent joint study by a Danish think-tank in collaboration with some Pakistani think-tanks and researchers, concluded that foreign funding was never the major source of donations in the Pakistani madrassahs. In fact, the study showed that it was mostly local community contributions that helped to run the madrassahs, not only in Pakistan but also in Afghanistan. The study also stated categorically that it was financial, rather than religious, considerations that were, and still are, the major motivating factor for parents opting to send children, mostly sons, to madrassahs rather than to government or private schools.

Additionally, the writer makes a strange assertion that the JUI-F had garnered support among the Durrani tribes in the NWFP/KP and Balochistan in the 1990s. Strange because, in point of fact,  the Durranis are few and far between in Pakistan as this Pashtun tribe is primarily based in Afghanistan. The JUI-F, led by Maulana Fazlur Rahman, draws some support from among almost all Pashtun tribes in areas populated by the ethnic Pashtuns in Pakistan.

The information regarding the post-Soviet withdrawal period in Afghanistan also needs more clarity. The author says Pakistan made immense efforts to instal Gulbuddin Hekmatyar’s government in Kabul, but it failed. While it is true that General-Ziaul-Haq favoured Hekmatyar’s Hezb-i-Islami over other Afghan mujahideen groups during the war, Hekmatyar refused Islamabad’s request to join the first mujahideen government formed under Pakistan’s auspices in Peshawar in 1992 to replace the last communist regime that collapsed when President Dr Najibullah resigned, as part of a failed UN peace plan. Sebghatullah Mujadeddi was made president of the mujahideen government for two months and Burhanuddin Rabbani for four months under the strange terms of the Pakistan-brokered Peshawar Accord. Left out of the power equation, Hekmatyar later began attacking Kabul, then ruled by Rabbani and Ahmad Shah Massoud, in an unsuccessful attempt to capture power.

Again, on page 255, it is wrong to say that “groups such as that of Rabbani were not strong enough to overcome the growing power of the Northern Alliance.” In fact, Rabbani’s Jamiat-i-Islami was the strongest force in the Northern Alliance, which also included non-Pashtun groups led by Uzbek warlord, Abdul Rasheed Dostum, and the Hazara Shia factions of Karim Khalili and Mohammad Mohaqqiq.

It must be a proofreading error that the Tajik population of Afghanistan on page 20 has been mentioned as just 350,000 as Tajiks are the second biggest ethnic group after the majority Pashtuns. On page 22 though, it has been rightly mentioned that Tajiks form one-third of Afghanistan’s population which is currently estimated to be 36 million.

There are a few other issues on which one can challenge the author. While every author has the right to his/her opinion, in a book of this nature, covering such a serious, little-explored subject, a more analytical and facts-based approach would have been in order.