The arms dealers of Mansfield Street are of a lineage that predates Partition. Of the 32 gun shops that line the road in Saddar, Karachi, eight are owned by one family: the Bandukwalas. They have been in the business for 130 years — it has earned them their name. The Bandukwalas owned gun dealerships in New Delhi, before moving to Karachi in 1947, where they first set up shop in Bolton Market.

While the cloud of anti-gun sentiment has always hovered over Mansfield Street, the shops in the old plazas have their own tales to tell — some of which have unexpected twists. 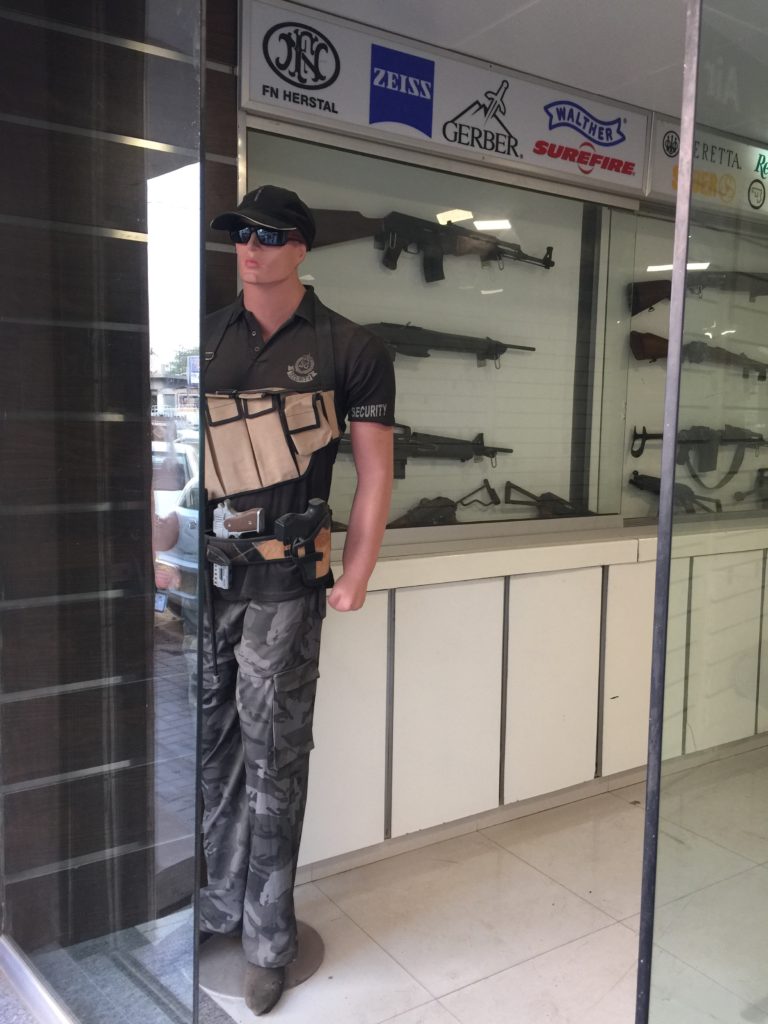 A mannequin inside Mustansir Bandukwala’s gun shop on Mansfield Street.

“At the time of Partition, there were only three gun shops in Karachi,” says Abbas Bandukwala, who was until last year, vice-chairman of the now defunct Arms Association of Pakistan. “One belonged to the Dossal family, the other to Suleman Omar, and the third was ours.” From 1947 till 1970 there were only seven or eight arms dealers in Karachi, he says. “But during the Zia regime, a lot of licenses were issued. After that, numerous non-Karachi residents opened up shop in the city.”

But the Bandukwalas aren’t the only gun-sellers on Mansfield Street. Shahid Naseem opened his shop — Ali Brothers — in 2005. Prior to that, he worked at the Bandukwala-owned Hussain and Brothers Trading Company for 24 years, learning the ropes of the gun trade. “Our highest selling item is the MP5 sub-machine gun,” says Shahid’s son Moiz, who works in the shop. “It is the weapon of choice for security guards.” Also popular are bullets for 9mm pistols, sold at Rs 60 each. 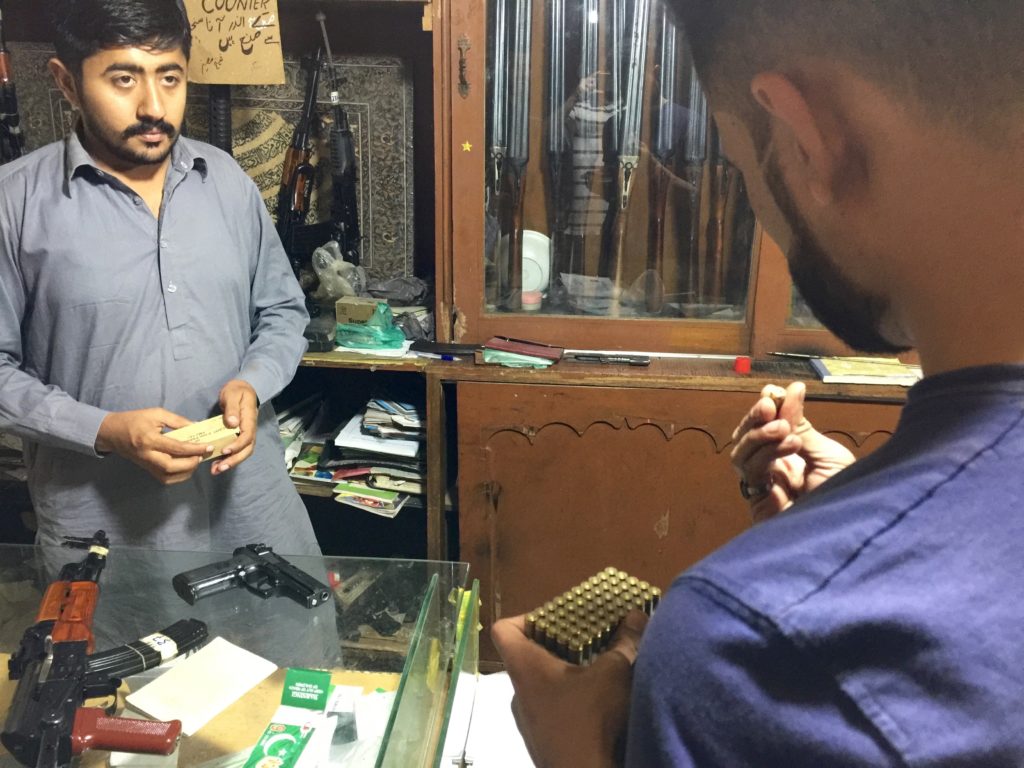 Muhammad buying bullets for his 9mm.

Through a door at the back of his tiny shop, Moiz leads two customers down a dark corridor, to an inner sanctum of sorts, where shotguns and rifles are displayed in old wooden showcases. One of the customers, Mohammad Danish, has come, license in hand, to buy ammo for his 9mm. He would like to be better prepared the next time dacoits target his grocery store in Mehmoodabad.

“We only sell to customers who have a license,” says Moiz, adding that during every transaction, the buyer’s license number is recorded in a register. Bandukwala, too, is particular about the authenticity of licences and CNICs. 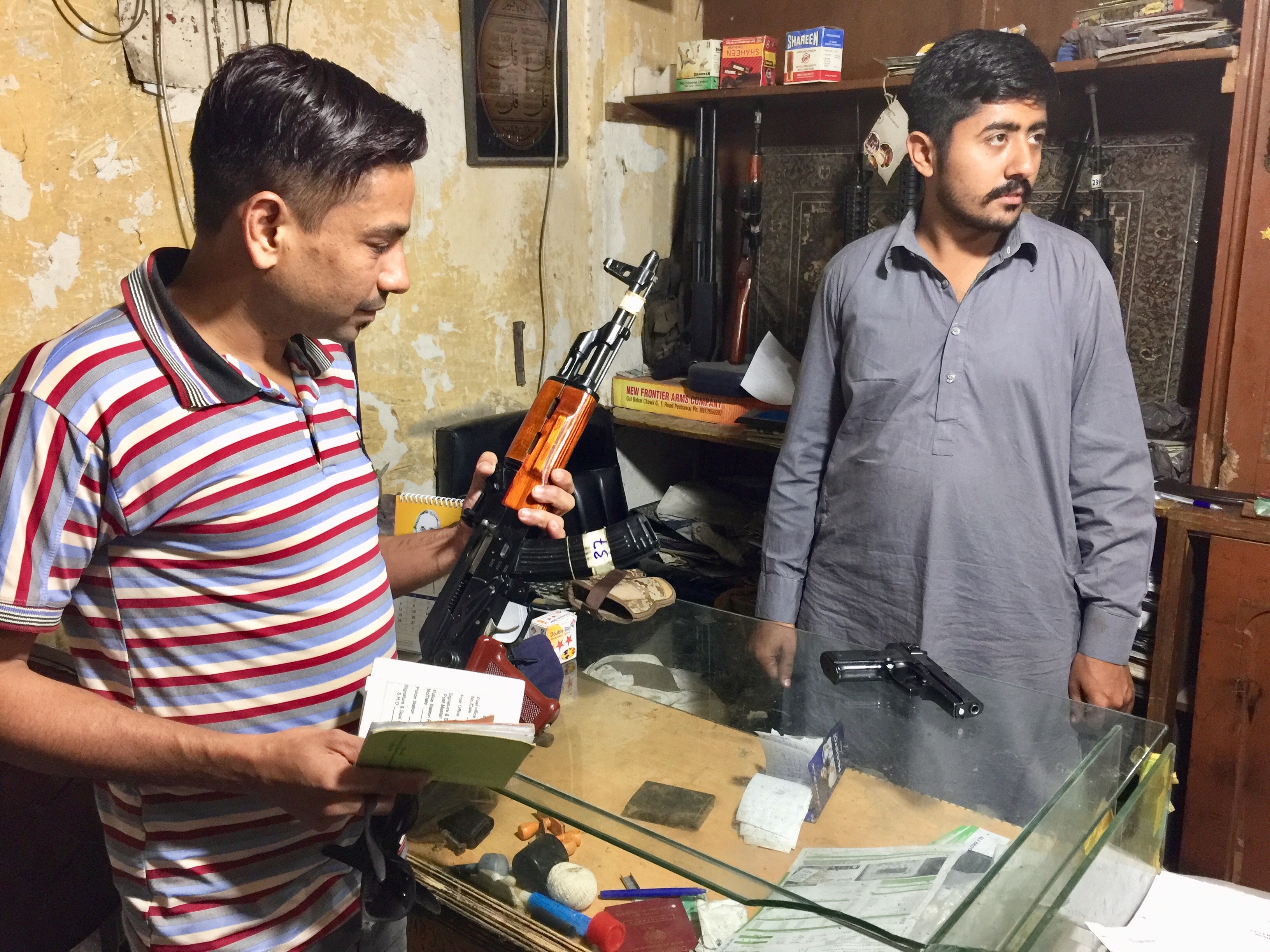 But this did not stop the police from raiding Moiz’s shop and confiscating Rs 80 lakh worth of ammunition in September 2011. “The police turned up drunk under the charge of one Munir Chandio, who was looking to carry out an investigation,” says Moiz. “They asked to see our weapons, which they then took without paying for.” Shahid, Moiz’s father, was arrested for selling guns without a dealer’s licence. “He was detained at the police station for four days before the FIR was lodged,” continues Moiz. Shahid went on to spend a month behind bars, until his hearing. “When he showed the District South judge his licence, he was ordered to be released immediately,” says Moiz. “But Chandio did not return our items, despite the court order.” Siddique, a policeman visiting the shop, confirms the authenticity of the story.

Hit hard financially, Moiz could no longer afford to continue his education. He and his father were forced to take up a side-job — supplying bottled water — to make ends meet. 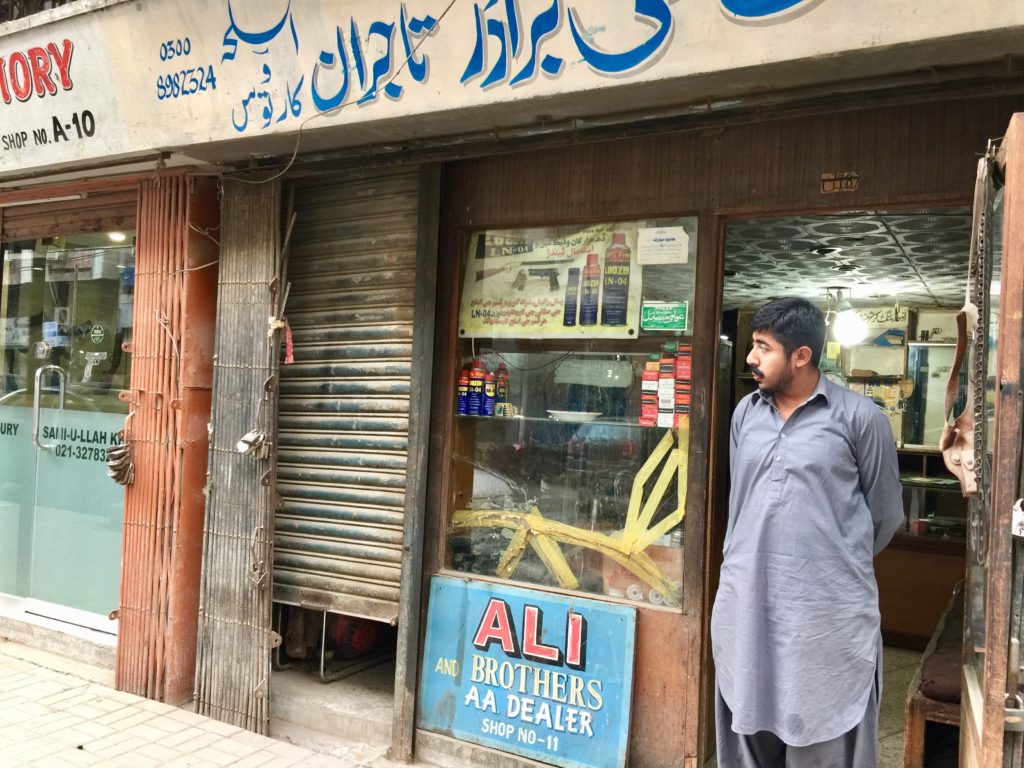 Referring to the sale of illicit weapons, Bandukwala says, “It was during Zia’s regime that things turned bad. That was when the Kalashnikov culture began.” His shop does not sell the Kalashnikov — a prohibited bore that cannot be sold to citizens unless they are granted special permission by the Interior Ministry. Nor does Bandukwala stock any other automatic weapons. “Our highest selling items are semi-automatic pistols and rifles, purchased by businessmen, politicians and civil servants, for protection,” he says. 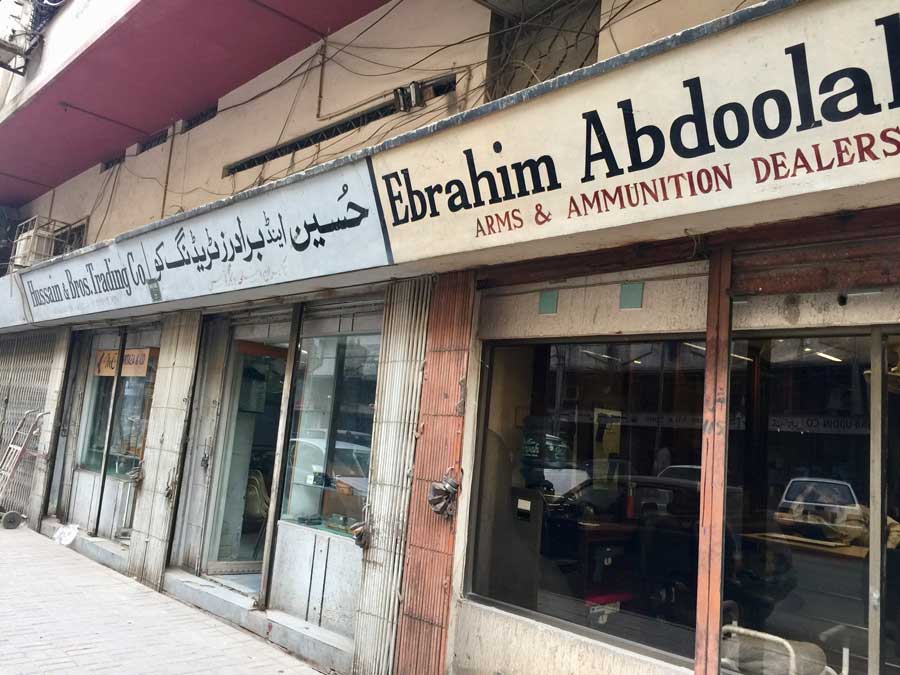 Two of many shops on Mansfield Street.

Older shops on the street can be identified by the way their names are spelt. Ebrahim Abdool Ali Arms and Ammunition Dealers — also Bandukwala-owned — only stock imported hunting rifles and shotguns. “Up until the seventies, 80 per cent of our customers were shikaris,” says Bandukwala. “They tended to be either big businessmen or respectable zamindars.” Today, he says, the majority of the customers are either Urdu-speaking or Pakhtun. “At times we get suspicious-looking people coming in,” he continues, “whom we politely turn away, even if they have a licence.”

Across the road from Bandukwala is the shop of his cousin, Mustansir. Here, according to the manager Tipu Sultan, the highest selling weapons, besides the 9mm, are those used for recreational purposes at shooting ranges in clubs. These include the double-barrel shotgun and the Beretta. 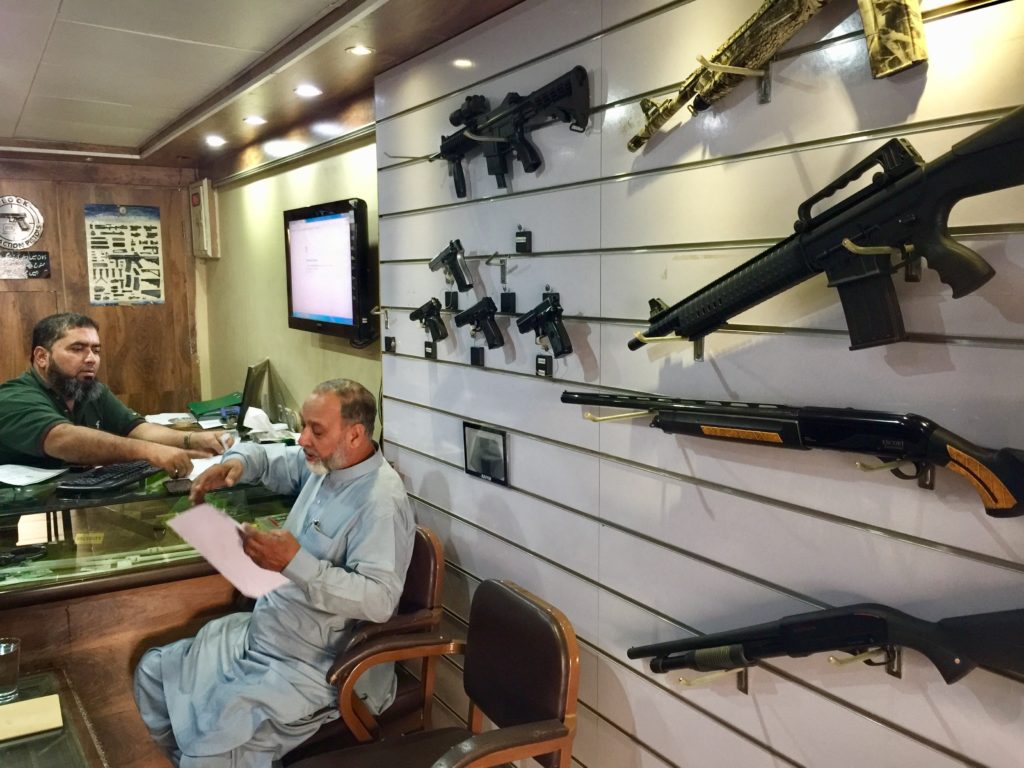 Tipu Sultan with a customer.

Bandukwala says he mostly agrees with what anti-gun rights activists preach. “But,” he is quick to add, “in Pakistan, where the government is unable to protect its people, they need to be able to protect themselves.” He says that in order for guns to be banned, illegal weapons must first be curbed. “If the law bans guns, I won’t mind; I will enter a different business,” he says. “But the government will only succeed in doing so if it purchases weapons from civilians at full price — which is highly unlikely.” He points out that the government is aware that illicit weapons are being sold in Sohrab Goth, but the police turn a blind eye. He suggests that in Karachi, the government should only issue dealer’s licences to those who can prove they have lived in the city for at least 10 years. 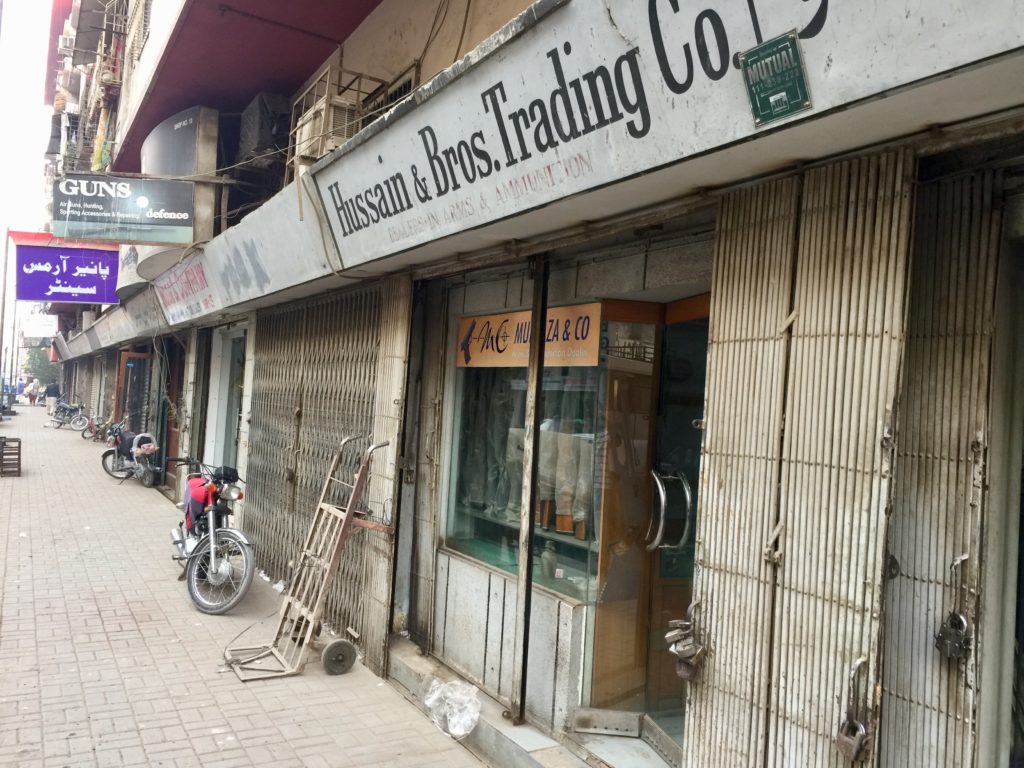 Bandukwala’s grandfather, Abdul Ali, started the family business. Abdul had four sons, and as his family expanded, so did the number of gun shops. Bandukwala now sits in a small office at the back of his modest, understated shop, where no guns are displayed. He refuses to relocate to Zamzama, which he dismisses as being part of a “high-fi culture.” He is not interested in being part of the rat race, where there is “no respect for rules.” Those bigger, flashier ammo shops in Zamzama, he says, are where influential people who do not have licences go. “My nature is such that I cannot partake in anything illicit — no hanky panky,” he says. “And anyway, it’s not like they are making more money out there; rents are higher and fancy shops require more maintenance.”

The Arms and Ammunition Association of Pakistan ceased to exist a year ago, after the government passed a law that set new, stricter requirements for the registration of associations. “We are in the process of re-registering and fulfilling all requirements,” says Bandukwala. “The fact that there aren’t that many of us doesn’t help. Our association cannot, for example, afford to have an office in every major town in the country.” 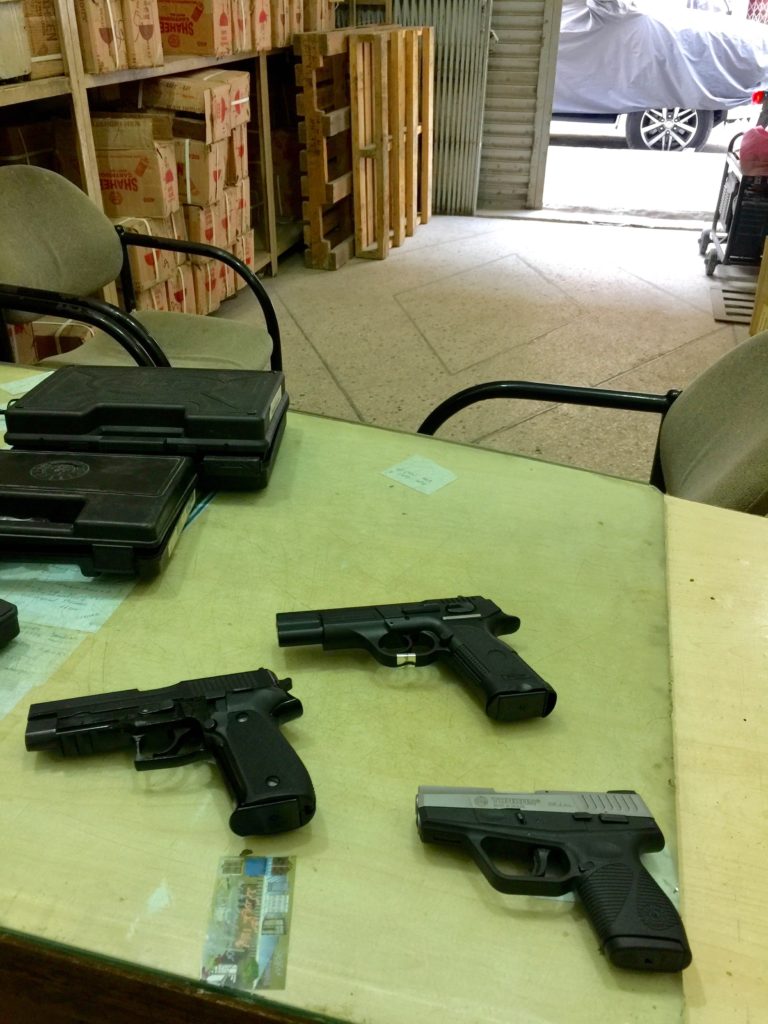 Photos by the writer.