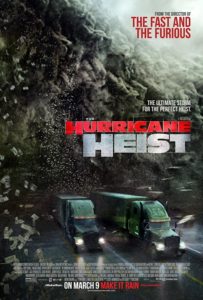 The story is set in Gulfport, Alabama, and opens on an unsettling note. Two young boys, travelling with their father in his tow truck, are caught in a vicious storm. Although he manages to get his sons to safety, they helplessly watch him being killed by a massive debris churned up by the disastrous Category 5 twister dubbed Hurricane Andrew that hit the US in 1992. The boys just barely survive, after the house their father hid them in is blown to shreds.

Fast-forward to the present day. The younger brother, Will Rutledge (Toby Kebbell), has turned into a meteorologist,  while the older one, Breeze (Ryan Kwanten), is an ex-soldier turned mechanic, running the family repair and maintenance workshop, who loves to start his mornings with a stiff drink.

Gulfport, the hometown of the two brothers, is in the same region where another super storm, named Hurricane Tammy, is building up, and Rutledge warns his weather monitoring bureau, that they are grossly underestimating the strength of the imminent storm. His instincts tell him it’s going to be the storm of the century and he seeks out his brother to convince him to leave with the townfolk, who are being evacuated by the local sheriff and his deputies.

Meanwhile, Casey Corbyn (Maggie Grace), a Treasury agent, drives in a convoy of three 18-wheeler trucks filled with out-of-circulation dollars to the Gulfport US Treasure facility, where they are to be shredded along with 600 million dollar notes. As luck would have it, the mint’s industrial-size shredder breaks down and Casey steps in to get Breeze to fix it.

Around the same time the thieves make their move, overpowering the security guards and getting access to the facility. However, their expert hackers are unable to open the main vault since Casey, for some unknown reason, has changed the password and only she can break the code. From then onwards, matters rapidly come to a head, as Casey is being hunted. But she teams up with Rutledge to frustrate every attempt by the thieves, which becomes increasingly impossible as the hurricane picks up velocity.

The Hurricane Heist makes up for what it lacks in terms of acting and dialogue, with its astonishing special effects, especially of the lashing winds and the dark storm clouds. There are the usual gun-fights, punch-fests, car chases, impossible stunts – and the added twist of a category 5 storm. With its furiously paced hurricane and the massive heist, this film should be seen on the large cinema screen for its full impact. It is guaranteed to keep  you on the edge of your seat.