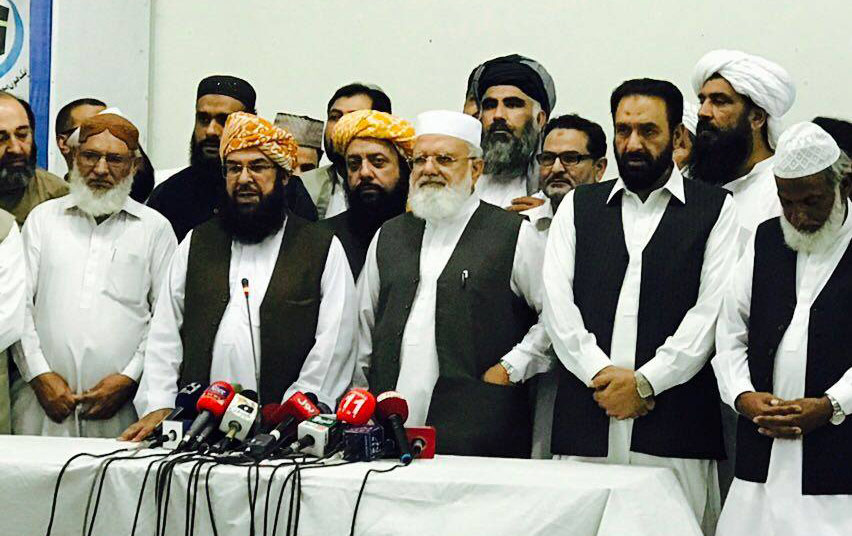 The MMA comprises the JI, the JUI-F, the Jamiat Ulema-i-Pakistan (JUP), the Tehreek-i-Islami Pakistan (TIP) and the Markazi Jamiat Ahle Hadith (MJAH), with the JI’s Liaquat Baloch appointed as secretary general, and JUI-F chief Fazl-ur-Rehman as president.

The original MMA came into being ahead of the 2002 general elections, under the military dictatorship of General (R) Pervez Musharraf, in a bid to oppose the then army chief’s US policies, and to implement ‘true Islamic ideals’ across the country.

Another MMA merger has been discussed in every election since then, but disagreement over boycotting the 2008 elections, and the JUI-F’s alliance with the Pakistan People’s Party (PPP) ahead of the 2013 elections, stymied plans for any such merger.

On March 25, the JI chief laid out his party’s vision for the MMA at a rally in Sambrial, claiming that it will “strive to purge the country of corruption, corrupt politicians and secular and liberal elements.”

According to JI spokesman, Ameer-ul-Azeem, arriving at a consensus won’t be hard on this and other issues for the MMA, considering that the constituent parties have a united history and ostensibly similar ideology. “Our goals and ambitions are straightforward,” he says. “We’re doing this for the elections — to increase our parliamentary strength by uniting the religious votes. We have united in the past as well.”

JUI-F leader, Amjad Khan, agrees. He says that the parties are regularly interacting to put forward joint policies. “We have been trying to unite the religious parties and revive the MMA for a while now. The main aim of the party is to restore ideals in a country that was formed on the basis of the Two-Nation Theory, amid conspiracies to make it secular and deny its Islamic foundations,” he adds. “They talk about democracy, but democracy means accepting what the majority wants,” he continues. “That’s why we are entering the elections and that’s what we want to achieve.”

Azeem, meanwhile, claims that there really aren’t any “true” secular and liberal parties in the country to begin with. “These parties that call themselves secular and liberal are neither parties, nor are they based on liberal ideals,” he says. “They are based on feudalism and capitalism. They are private limited companies wearing the mask of democracy.” However, he maintains that “compared to the dynastic parties, religious parties are offering a more democratic alternative.” 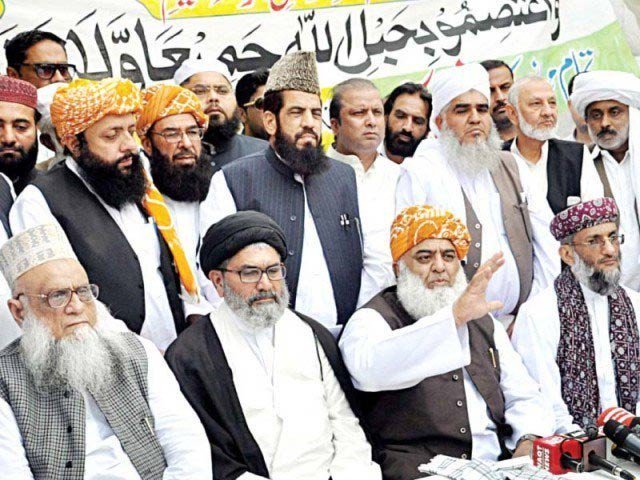 Both the JI and JUI-F leaders are confident that the differences between them in 2008 and 2013 are buried, and that the MMA can now eye political gains as a single unit in the coming elections. “Our aspirations haven’t changed,” maintains Amjad Khan. “Whatever few disagreements we had were minor, and we are working on overcoming them. If we’re going to talk about the past, our federal and provincial performance is on record. For instance, our work in education — we created universities for women, opened primary and high schools — is there for all to see,” he adds.

Ameer-ul-Azeem echoes Khan and says the parties are not even worried about the past. “We’re not thinking about what might have gone wrong in the past. Our eyes are now firmly focused on the future.”

However, while the JI and JUI-F — the two largest Islamist parties in the country — are confident about a “full revival” of the MMA, and are hopeful of electoral success, there’s one noteworthy omission from the lineup: the Jamiat Ulema-e-Islam Sami (JUI-S). Why has the Sami-ul-Haq-led JUI-S opted out of the MMA? The reason, says JUI-S spokesman Yousaf Shah, “is our alliance with the Pakistan Tehreek-e-Insaf [PTI], and because the conditions that we put forward for the MMA to consider, have not been met.”

The party’s alliance with PTI originates in the latter’s grant in June 2016, of Rs 300 million, and another of Rs 270 million approved in February, ahead of the Senate elections, to the Dar-ul-Uloom Haqqania, the madrassahs run by Sami-ul-Haq, which have historic ties to the Taliban. Sami-ul-Haq was backed by the PTI for a Senate seat, even though the JUI-S chief eventually lost.

Ahead of the MMA merger, the JUI-S had asked that the JUI-F and JI separate themselves from government coalitions — the former in the centre and the latter in Khyber Pakhtunkhwa (KP). It also demanded accountability in response to the way JUI-S was “hard done by” in 2002.

“They treated us in a stepmotherly fashion when it came to the division of seats. They need to make up for that before even considering any alliance,” says Shah. The JUI-S leadership further claims that the MMA isn’t really an alliance of religious parties. “Three of the so-called five parties exist only on paper,” he says. “It’s basically an alliance of two parties. We want the remaining religious parties to be invited to the coalition as well, but this has not been done because the two big parties consider themselves the custodians of religion in the country.”

Amjad Khan denies Shah’s claims, saying that the party had not put forward any conditions in regards to their participation in the MMA. “Everyone can see what their alliance with the PTI has done to them,” he says. “We really wanted them to join us. We’ve been in touch with them and their representatives have attended many of our sessions and participated in our committees. Nobody shared any reservations with us.”

Ameer-ul-Azeem too feels that the alliance with PTI is pulling the JUI-S back. “JUI-S hasn’t joined us because Maulana Sami-ul-Haq said he wanted to go with Imran Khan. The poor man has gotten sick after joining Imran Khan. But he’s gradually getting better, so we hope that he will join us soon.”

Amjad Khan reveals that taking other Islamist groups on board is also being deliberated by the MMA. “The participation of other religious parties, especially those that are newly formed, is under consideration. But the final decision will be taken by all parties collectively,” he said, referring to the Tehrik-e-Labbaik Ya Rasool Allah and the Milli Muslim League.

Ameer-ul-Azeem too expects the alliance to grow as the elections approach. “This is the first time in the history of Pakistan that an alliance has been formed after breaking up. We’ve had the likes of MDM, PMA, IJI and so on, but once they disintegrate, they’re done and dusted,” he says. “MMA is huge and it is only going to get bigger.”