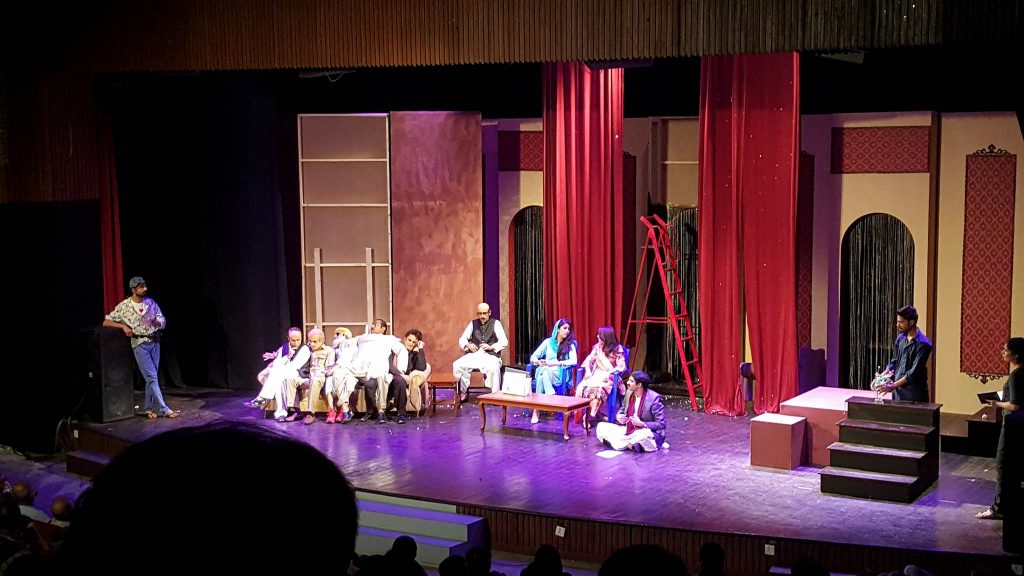 Kopykats Productions returns to the stage this year, performing Bananistan, a unique play showcasing the enforcement of martial law in the fictional state, Bananistan, which has left the country’s politicians without ‘jobs.’ Only allowed to act in the theatre, the politicians are seen auditioning for parts in the romance play Meray Sultan ka Fatima Gul se Ishq-e-Mamnoon (a play within a play). Nawaz Sharif (Taha Humayun) and Shahbaz Sharif (Muhammed Umer) are the first ones to be cast — as the father of the bride, Hina Rabbani Khar (Fareeha Raza), and father of the groom, Qaim Ali Shah (Shafqat Khan). Kashmala Tariq (Natalia Baghdadi) is the bride’s mother and Imran Khan (Dawar Mehmood) is in love with the bride. Sheikh Rasheed (Mohtasim Malik), Maulana Fazl-ur-Rehman (Mustafa Chaudhry) and Altaf Hussain (Saqib Sumeer) provide further comic relief. Director (Iman Shahid), Chotu (Hassan Raza), Client (Sajeel Mir Kazmi) and Producer (Mohsin Ejaz) appear on the stage from time to time, changing the mood and presenting a different setting.

The play works marvellously as a satire, replete with political jokes that keep the audience laughing throughout its one hour, 40-minute showing.

Kopykats has earned the reputation of having brought theatre — which was slowly dying in Pakistan — back into the Pakistani lifestyle, showcasing productions written by Anwar Maqsood such as Pawnay 14 August, Sawa 14 August and Siachen. This time however, the production house decided to work with a script written by its in-house team, one that is targeted towards a younger audience. Dawar Mehmood, Saqib Sumeer, Mustafa Chaudhry, Faisal Chaudry, Salman Khan and Fawad Baig wrote the script, and the play was directed by Tulin Khalid Azim. And that this is a formula that works is evidenced by the fact that tickets for Bananistan have been sold out since its first Arts Council performance on August 25, and from the non-stop laughter in the auditorium that begins from the minute Chotu and Producer take the stage.

Set in 2030, Bananistan provides space for the actors and writers to unabashedly poke fun at Pakistani politicians. The play features running jokes such as Imran’s shaadi, Qaim Ali Shah’s age, Mustafa Kamal’s departure from MQM, Zardari’s plunder, and the Sharif brothers’ desire for paaye, using actual instances that have taken place in the last year or two as subject matter. However, that comes with its own risks: Dawar Mehmood has been known to say that the play might be shut down before it completes its run if the powers-that-be take it amiss and besides, he never knows what might offend the audience. Yet, he says, the show must go on — and does each day to a packed house.

Notable among the performances are those by Dawar Mehmood as Imran Khan, Fareeha Raza as Hina Rabbani and Taha Humayun as Nawaz Sharif. However, the stars of the show are Mustafa Chaudhry (Maulana Fazl-ur-Rehman) and Shafqat Khan (Qaim Ali Shah), who play their characters to humorous perfection. Altaf Hussain, played by Saqib Sumeer, is somewhat inconsistent. At times, his portrayal of the MQM Quaid is flawless, but at others, he fails to deliver. And Chotu, Client and Producer’s appearances are just tiresome. And while the play is unarguably a huge bunch of laughs, the narrative is weak in a few places — with the onlooker literally suddenly losing the plot!

That notwithstanding, flaws and all aside, Bananistan is a must-see. For crime and grime-weary, depressed Karachiites, the laughter it engenders could be the best medicine.